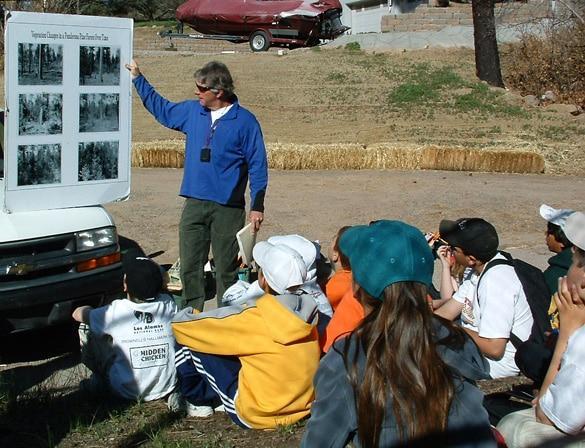 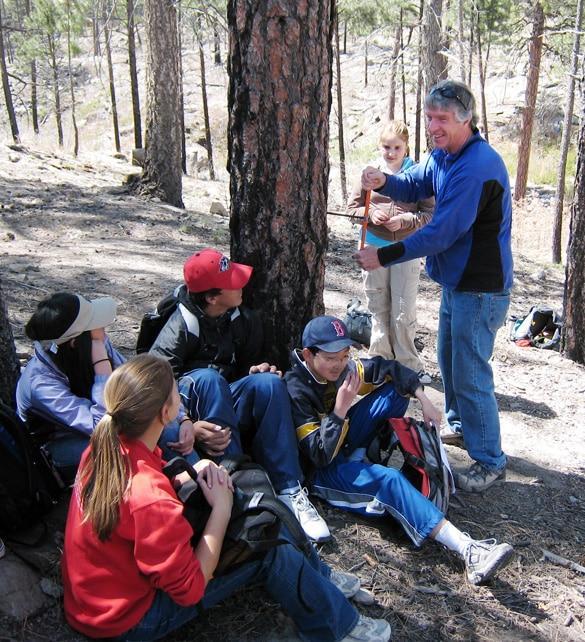 The Friends of Bandelier have chosen John Hogan as the 2018 recipient of the Dorothy Hoard Stewardship Award.

The award is given annually to someone who has contributed to the health and well-being of our landscape and community. Dorothy, the founder of the Friends of Bandelier, died in March 2014, and the award is a legacy to her passion and care of the place she loved.

John has spent his life reaching out to others in many different ways, teaching Life Saving and Water Safety, as a Rehabilitation Assistant for blind veterans at a VA hospital, as liaison for visiting researchers during his tenure as a USGS Physical Scientist at Bandelier (He simultaneously completed a degree in Biology from UNM.) John served a term on the Board of Directors of the Pajarito Environmental Education Center (PEEC), where he developed and led the Living Earth Adventure Program (LEAP) for teens.

As co-founder of the Volunteer Task Force after the Cerro Grande Fire, he taught hands-on Fire Ecology and worked with children to rebuild trails damaged by the Cerro Grande Fire. As a BAER (Burn Area Emergency Response) team member, he worked throughout the west helping to educate and involve affected communities in rehabilitating burned watersheds. He is currently an Assistant Ski Patrol Director for Pajarito Mountain Ski area and an instructor in the National Ski Patrol’s Outdoor Emergency Care course.

John was raised in Northern California where he surfed, skied, and backpacked in the high Sierras. He credits his parents for instilling in him a love for the outdoors. He became enchanted by the landscape of the Jemez Mountains when he first visited Northern New Mexico in 1975. He moved here permanently in 1978.

“I loved the mountains, mesas, and canyons and have never grown tired of the view and ever-changing light as you drive the main hill road,” John said.

After the 2000 Cerro Grande Fire, John, Gerry Washburn and Laura Patterson (teachers at Mountain School), and Craig Martin were instrumental in developing the Volunteer Task Force.  The Task Force was organized to help educate the public about fire and fire recovery through hands-on restoration and reforestation projects. They went to other communities after the fire and gave talks about defensible space, fire, and fire recovery, and organized community-based recovery projects, making a difference to many communities as well as Los Alamos.

Probably the most unique thing that the Task Force accomplished was getting people out into the burned area to help in rehabilitation efforts. John and the others interacted with over 6,000 students from as far north as Taos and as far south as Clovis. Not only did they teach, but helped people heal and move forward in hope. (See below for words of the students).

Today, those who move to Los Alamos see the mountain with all its beauty, they don’t see the black. And, those who lived through the Cerro Grande Fire have begun to see the new beauty in the way nature heals.

John is married to Cindia, a retired REMAX realtor. They have one daughter, Molly, who has recently moved to New Zealand with her husband, Erik Loechell, on one year work visas.

As the recipient of the Dorothy Hoard Stewardship Award, John will receive one of Dorothy’s watercolors of the area and the Friends of Bandelier will donate $1,000 to a project that Bandelier and John wish to be accomplished in her name.

Poems and essays written by students and published in “Touched by Fire, Renewal of a Landscape and a Community. 2000-2010, Compiled and Edited by Teralene (Terry) Foxx:

The trail was burned black
For four years we fixed it up
The beauty is back.
~Gwen

Everything we did this year was interesting and rewarding

We learned a lot about fires and how dangerous they are. We all felt good in being able to help Los Alamos in Northern New Mexico recover from the terrible fire.
We have to continue learning about nature and continue helping in keeping our forests safe, clean, and beautiful.
~Jaqueline

I feel good knowing that I helped rebuild the Quemazon trail and planted lots of trees. One of the first couple times we went up on the Quemazon nature trail we could see a lot of black and a little bit of green. Gradually we saw more and more trees and grass (and animals). On the last few trips we were the people that made a little green (we planted trees) and stopped some brown (we made dams so that water couldn’t make erosion over paths).
~Cyrille

Note: These poems and essays are written by Mrs. Patterson’s 6th grade class (most are now about 30!)