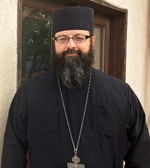 While driving the road off of the mountain, the vista of the Sangre de Christo Mountains opens before you. It is a spectacular view in every season. Right now they are capped with snow that has somehow avoided us here in Los Alamos.

However well we know the sight of them, they are very far off. Even if we look at maps or fly over them on our way in or out, they remain distant. Even our own mountain remains transcendent, unknown. If we hike some trails, some of it may become familiar, but mountains are big, mountains are seen in their entirety only from a distance.

To know something is to experience it, to be close.

A photograph or a painting of a mountain may convey the illusion of distance, but the photo or painting itself is imminent. We can know a painting in a way that we never could know the mountain itself.

People are the same in a way. We can generalize about people, but a group, an ideology, a sect, is too big to really know. We often can give the 30,000 foot view of a group, but it all changes when we get to know a person within the group. Although the personal interaction may enhance our knowledge, people remain mysterious.

We know a person by how they look and how they act, but is that the essence of a person? The essence lies somewhere below the externals. We often say an action taken under stress or danger, “Really showed that person’s character” or “Who that person is.” Our (mental) picture of a person is how we know them.

Even our language about sexuality speaks about experience and knowing. To “know” someone in the Biblical way. To “be” with another person. To “be intimate” with someone. It is an awesome thing to be that close to another.

Imminence, being truly there in a moment, in a place with someone is powerful. It helps us to know them as far as we can as different persons. We need to stop identifying people as part of an artificial grouping and start interacting with them as persons, one on one. Each as deserving of love and respect as the next, as much as we are.

God gave us the perfect example of this in His Son, Jesus Christ. God in His essence is the ultimate “mountain in the distance,” ultimately other, distant, and unknowable. But he bridged the gap that we could not. He became imminent.

Jesus Christ is the express image (icon) of God the Father. He became one of us in every way except disconnection with God (sin), so that we could know Him. We can know the image of God in a way we could never know His transcendent divinity.