As many of you know, it can be quite the mini-adventure living next to one of the canyons here in Los Alamos. Not only do we have the beauty of the pines, the oaks, the geology, the pleasing contours of the land, but we also are treated to a panoply of wildlife traipsing even through our yards.

Over at IHM I’ve seen all sorts of wildlife in my five years here—raccoons, bears, foxes, Pokemoners (just kidding! … but they DO seem to be most prevalent. When’s huntin’ season for them things up here, anyway? Well … most of ‘em are kind of scrawny, anyway.) Loads of deer; some bucks with impressive racks have virtually taken up residence, often bedding down a few feet behind my rectory/parsonage. They have rather a penchant for acorns … as do crows, apparently. Caught a cool video of a mountain lion a few years ago, though I didn’t see him/her live, and no sign since. Coyotes have a major headquarters in Acid Canyon behind my house; is probably why no rabbits this year.

Of course, there are also the ubiquitous squirrels and chipmunks. And the other evening I was privileged to watch the first bobcat I’ve seen here from my window vantage point … he absorbed with typical feline telltale post-dining ablutions of the feet—the “pause for the paws”—which spoke perhaps of =>1 fewer squirrels around the house. Now that I think about it, chipmunks have been unusually scarce this year. Maybe ol’ Bob has been hanging around longer than I thought.

No elk have shown up around the church, though I’ve almost run into some up in the Jemez.  But, then, who hasn’t? I DID almost literally collide with a bighorn sheep over by the Valle a couple of years ago; with his rack, it would have been a pretty even match.

Haven’t found any rattlesnakes around yet, though I’m not complaining; I had quite enough of adrenaline-producing sudden encounters with them growing up in west Texas, thank you, and diamondbacks tend to be nastier-tempered than the prairie rattlers around here. Have had to step over a few other species of slitherins, though; that’s probably why the local mouse population seems to have diminished over the last couple of years. I could also do without so many ravens; I used to feed them a bit when they came rapping around my chamber door, but with their incessant raucous calling … nevermore.

By the way, many people ask about the poor little coyote that I wrote about several months ago.  I catch a glimpse of her now and again, and her coat has been thickening, so she seems to be getting healthier. I suspect she’s the mom of the coyote chorale that feels compelled to serenade the neighborhood with virtually every siren that passes by.

Yet, even with all of our local beauty, I must admit that I miss some of the wildlife up near my old parish in Clayton, in the northeast corner of New Mexico (I used to brag that my parish was so big that it bordered three states … and it—encompassing all of Union County—WAS about the size of Delaware). The pronghorns were so beautiful to watch, especially as they would lope lazily along when something disturbed them—at speeds nothing else could match. It was told that they evolved their speed as a defense against a cheetah-like cat now extinct, and, of course, against wolves that used to be much more prevalent. Of course, they’ll likely lose some of their communal blazing speed over the centuries as slower individuals are able to now also survive and have progeny. Wouldn’t it be fascinating to watch natural selection at work in that area over the next million years or so and see how that predator/prey relationship evolves?

So, yes … we are truly blessed here in New Mexico, able to observe God’s nature so close at hand. Even as I write this on Friday evening here at 7,200 feet, a lovely electric light and sound show from the heavens is on display.

In an old comic strip called Bloom County, popular in the 80’s, the stress relief was to go lie in a field of dandelions and observe the clouds. Here the beauty of the mountains, the canyons and the wildlife are just as, if not more, soothing. So … on this Labor Day and week in which we celebrate the blessings of human labor, let us not omit taking a break and give thanks also for the beautiful creative work of God.

“And God saw everything that he had made, and behold, it was very good…and he rested on the seventh day from all his work which he had done.” (Genesis 1:31-2:1) 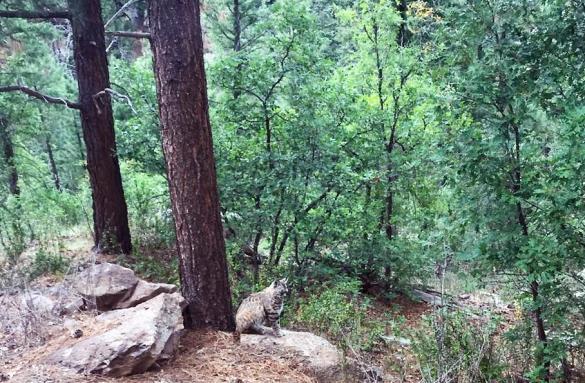 Bobcat observed sitting on a rock Friday in the wooded area behind Immaculate Heart of Mary Catholic Church on Canyon Road. Photo by Fr. Glenn Jones