Fr. Glenn: Do Whatever He Tells You 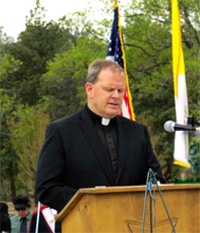 Hmmm … classified documents in President Biden’s home. Same for former President Trump. Representatives and senators lying to be elected. Bribes. Voter fraud allegations. Financial schemes, scams, hatreds. Lie, cheat, steal. Rampant shoplifting. Sigh. Who are we able to trust to do the right and the good? To borrow from Thomas Paine: “These are the times that try men’s souls.” (“The Crisis”)

Each time new such news arises, are we not left with a miserable feeling of being let down and more disillusioned, regardless of who it is? Often one “side” or position revels in bad news for their opponent, but what does it say about those who do so? If one has to lie, cheat and steal to have one’s position advance, then that position (or candidate, or philosophy, or way of governance) apparently has weakness that truth will spotlight. Regardless, moral turpitude diminishes all persons. Borrowing from poet John Donne, we see how “No man is an island, Entire of itself. Each is a piece of the continent, A part of the main…Each man’s [moral] death diminishes ME, For I am involved in mankind.” (“For Whom the Bell Tolls”).

Now, as the old saying goes, “If you lie down with dogs, you rise up with fleas”; in other words, when we see and associate with those who have lesser moral standards, it is easy to be swayed by the attraction of immediate temporal gain, whether that be in political, financial or simply in seeking acceptance by the same. And even if we don’t surrender morals right away, the frog boiling slowly dies nonetheless. Likewise, constant exposure to immorality can weaken even the most steadfast.

Yet even totally secular men and women will likely value some moral code, having witnessed (or experienced) the harms of negative actions toward themselves or others. Even the secular realize the necessity and goodness of the Golden Rule: “Do to others as you would have them do to you.” (Luke 6:31) Indeed, one wonders how an orderly society could exist without such direction.

And, of course, the religious person understands that the march of time inexorably leads him/her closer to eternal life (or death), and the sincere believer will ever hold before mind’s eye the awareness of “…what does it profit a man, to gain the whole world and forfeit his life?” (Mark 8:36) For “…no man can ransom himself, or give to God the price of his life, for the ransom of his/her life is costly, and can never suffice, that he should continue to live on forever…” (Psalm 49:7-8)

And so each person must decide what kind of person he will be—good, moral and just…or not. But, if moral, what will be his standard? His guide?

If one believes in a standard and teaching, then that person will follow such teaching with his whole heart, mind, soul and strength, and despite occasional failures due to weakness, he will return to that teaching at soonest opportunity, like a salmon returning against the world’s current to its place of origin.

For the truly believing Christian, this is the Way, the Truth and the life that Jesus is, and thus deviations from His teaching are by definition deviation from Him, the Good. Can there be any actual advantage to deviate from the path He gives so clearly? Do we not, brothers and sisters in Christ, hear those words from Him: “The good man out of his good treasure brings forth good, and the evil man out of his evil treasure brings forth evil. I tell you, on the day of judgment men will render account for every careless word they utter.” (Mathew 12:35-36) … just as we hear near the very end of the Bible: “…the dead were judged by what was written in the books, by what they had done.” (Revelation 20:12), and that “…all who are in the tombs will hear his voice and come forth, those who have done good, to the resurrection of life, and those who have done evil, to the resurrection of judgment.” (John 5:28-29) Is our life’s foundation on sand, or is it on rock? (Matthew 7:24-27)

The sure road is, and always will be, that road of the teaching of Christ, regardless of the narrowness of the gate and difficulty of the road in our now temporally-bound lives. Some claim “universal salvation” for all regardless of how they have lived, but that certainly doesn’t seem so by scripture; in fact, Jesus Himself explicitly laments that those who attain eternal life “are few” (Matthew 7:14), and even St. Paul did not presume on his own salvation: “I am not aware of anything against myself, but I am not thereby acquitted. It is the Lord who judges me … who will bring to light the things now hidden in darkness and will disclose the purposes of the heart. Then every man will receive his commendation from God.” (1 Corinthians 4:4-5)

Thus we cannot help but mourn with Christ those who do not come to life, and thus always striving to convince others of the rightness of the path and to set the example of goodness by our words and actions—being charitable, gracious and kind. By such we, as St. Paul recounts desperately, “…might by all means save some.” (1 Corinthians 9:22) For it is not wealth, power or fame that are of value, but only how we have loved God and one another, and how better to love another than to lead him to eternal life in God?

Jesus tells His disciples: “You are my friends if you do what I command you.” (John 15:14) Desiring to be His friends—indeed, His very brothers and sisters—let us follow His Word with whole heart … hear the Words of His Mother: “Do whatever He tells you,” (John 2:5) … heed the command of the Father: “This is my beloved Son; listen to Him.” (Mark 9:7) In doing so, we’ll find with St. Teresa of Avila that, even though this life can at times be “as a night in a bad inn,” we know that the eternal embrace of God awaits, and that the lights of home come nearer each day.