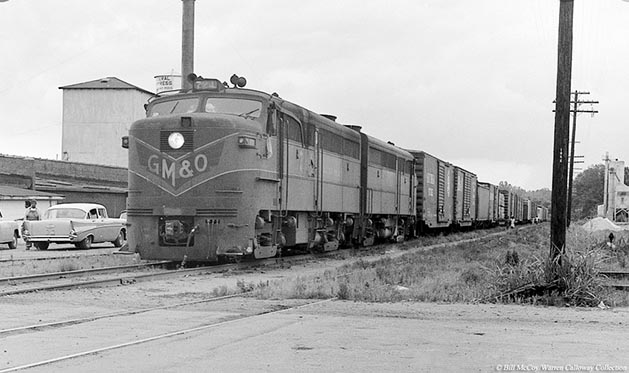 Editor’s note: When Dave Fox of Los Alamos was a young boy, he and his cousin would pay one visit each summer to their grandmother and grandfather in Mobile, Ala.

“Twas an overnight trip; left St Louis, Mo (our hometown) in time for dinner followed by the heavyweight sounds of a train thru the night, stopping throughout the trip at the small towns of Mississippi,” Fox recalled. “At many a stop, from the top bunks of our Pullman sleeping car we’d stare out at the night-lit scene described in this poem, not really understanding what we were seeing, but boyishly bemused and half-enchanted by what, as it turned out, we did not understand until high school years, to be the midnight dramas of escape from the deepest South and the diesel-horn role of railroads like Gulf Mobile & Ohio R.R.”

Remembering those years of his childhood, Fox wrote the following poem:

You did not have to be there
more than half a century ago.

You’ve seen it before
caught in photos or movies
black and white.
Mathematics of trusses,
soot dark, iron thick,
suspending the arch of roof
above the great railway shed,
broad as city blocks,
Mother to two dozen trains at a time-
of the Frisco, the Mo Pac and the GM&O,
steel wheels polished as swords
brake hoses steaming.
The whole industrial business idled
under no strain at all,
hissed at once
to the conductor’s call
“Bo-Ard!”

Now the queen train
of the Gulf, Mobil & Ohio Railroad,
named on passenger schedules
The “Rebel” of the GM&O,
slams, lurches at its couplings,
startles flocks of doves up in the trusses
flagging the Rebel’s move from North to South.
To foaming surf sand.
Scampering crab.
Beached umbrellas.
Sunburned feet.
Corinthian columns
in beds of azaleas
in warm pine straw.