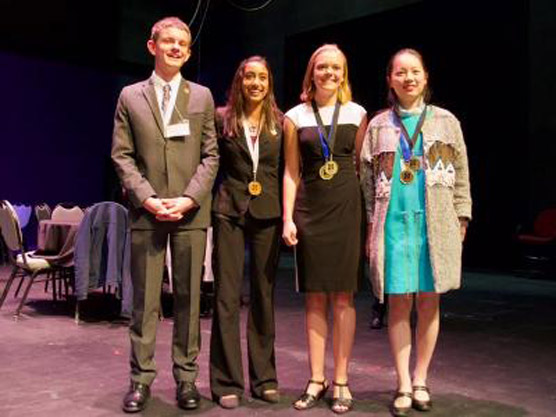 LAHS juniors Priyanka Velappan, Alex Ionkov and Sophia Li, along with freshman Lillian Peterson won all expense paid trips to Intel ISEF by winning Grand Awards at the Northeastern New Mexico Science and Engineering Fair and the New Mexico State Science and Fair. This will be Velappan’s, Ionkov’s and Li’s second time competing at Intel ISEF.

The Intel International Science and Engineering Fair (Intel ISEF), a program of Society for Science & the Public (the Society), is the world’s largest international pre-college science competition. Each year, approximately 1,800 high school students from more than 75 countries, regions, and territories are awarded the opportunity to showcase their independent research and compete for on average $4 million in prizes.

Today, millions of students worldwide compete each year in local and school-sponsored science and engineering fairs; the winners of these events go on to participate in Society-affiliated regional and state fairs from which the best win the opportunity to attend Intel ISEF. Intel ISEF unites these top young scientific minds, showcasing their talents on an international stage, where doctoral level scientists review and judge their work.

Intel ISEF is hosted each year in a different city (Los Angeles, Pittsburgh and Phoenix through 2019). The Local Arrangements Committees from each city partner with the Society and Intel to provide support for the event including the recruitment of thousands of volunteers and judges and in organizing an education outreach day in which more than 3,000 middle and high school students visit.

My name is Lillian Peterson, for the past two years, I evaluated weather data using python code in order to examine how our climate is changing. This year, I decided to study the impacts of climate change–and I realized that nothing is more important than food!  I created a statistical model that found correlations between historical crop yields and weather data for every county in the U.S. since 1970. This model was used to predict yields out to 2100 for two future climate scenarios. Climate change results in a loss of $23 billion for corn and $11.5 billion for soy per year in 2100 for the high emissions scenario, in today’s prices. This study highlights the importance of accounting for future costs of climate change when choosing today’s energy policies, and motivates continued improvements in agricultural technology to compensate for warming temperatures.

Our team project, by Priyanka Velappan and Alex Ionkov, delves into the allergy signal cascade, specifically into an immune cell called the mast cell which is highly involved in allergies. Using both experimental and computation biology, we explore the kinetics of a specific receptor on the surface of the mast cell. This receptor initiates the signal within the cell that results in its death, and that is then communicated to other immune cells in the body. If we can understand the initiation of this reaction, we can potentially understand a way to stop it. The methodology used in this project is also applicable for studying other diseases to understand that signaling as well.