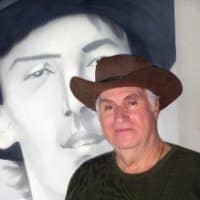 Maurice Turetsky from professional profile. Courtesy/LinkedIn
NMHS News:
FORT STANTON ― Fort Stanton Historic Site has announced that a new art exhibit entitled, “Becoming Billy” will open inside the site’s main museum with a reception and official opening at 6 p.m. Friday, July 6.
The entire New Mexico Department of Cultural Affairs family is still mourning the loss of Santa Fe artist Maurice Turetsky who died in February. A professional artist, painter and sculptor, Turetsky, a Philadelphia native and his wife Susan moved to Santa Fe in 1995. Turetsky was a fervent supporter of New Mexico Historic Sites, specifically those in Lincoln County.
The “Becoming Billy” exhibit features the works of Maurice Turetsky, who was an artist, a passionate creator and a student of Lincoln County History. This exhibit will allow visitors to share Maurice’s interest in the complicated character of Billy the Kid and to engage with New Mexico’s history through the lens of fine art.
Department of Cultural Affairs Cabinet Secretary Veronica Gonzales said, “Last year we opened a stunning exhibition with several of Maurice’s paintings at Lincoln. These special portraits utterly transformed the gallery space at our Visitors center. Maurice was a treasure and we miss him dearly.”
Turetsky’s exhibition “The Principal Characters of the Lincoln County War” now serves as the anchor exhibit in the recently opened “Lincoln Gallery of Western Art.” Turetsky’s 32 large pastel portraits bring to life the individuals who participated in one of New Mexico’s most significant historical events in ways that are often lost through traditional museum exhibits.
“Maurice Turetsky’s passing marks the loss of a true champion of New Mexico cultural history,” said Tim Roberts, manager of the Lincoln and Fort Stanton Historic Site. “We at Lincoln Historic and Fort Stanton Historic Site are especially saddened at this news as Maurice’s contributions to the site through his artwork has been a major component of interpretive efforts for well over a decade. The loss of Maurice is deeply saddening but his work and love for our state’s heritage will live on through the artwork he poured so much love and talent into.”

Turetsky acknowledged he had never seen the famous tintype of Billy the Kid until he was nearly 60 years old. Subsequently he rendered versions of it in pastel paintings, bronze sculptures and painted steel cutouts. Lincoln State Monument has many of Turetsky’s portraits of Billy the Kid and other key figures in the in the Lincoln County War.

Turetsky graduated from Philadelphia’s Tyler School of Fine Arts where he was a protégé of Dean Boris Blai who had been an assistant to Auguste Rodin.
In 2010 Turetsky was honored with the award for Outstanding Single Contribution to Wild West History, in recognition of his artistic and historical portrayal of the Principal Characters of the Lincoln County War exhibit by the State of New Mexico at the State Historic Site in Lincoln.
“Maurice Turetsky was a devoted friend to New Mexico’s historic sites” said Dr. Patrick Moore, director of New Mexico Historic Sites. “His love and fascination of the West created a ripple effect that sparked curiosity and exploration among those who experienced his art. He will be greatly missed.”
LOS ALAMOS