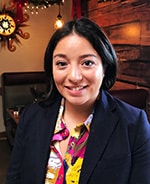 Democratic nominee for House Dist. 46 and former executive director of the Regional Coalition of LANL Communities (RCLC) Saturday issued a statement regarding the results of a recent audit by the office of State Auditor Wayne Johnson and an investigative report from the law firm of Adams+Crow, which was commissioned by the Los Alamos County Council.

In an email accompanying the statement, Romero said since the controversy over the RCLC began, there have been a lot of assumptions and finger-pointing, particularly in the media.

“I have taken responsibility for my actions and now I’d like to provide a bit more background,” she said. “Thank you to all of you who have refrained from rushing to judgment until all of the facts are out.”

The Regional Coalition adopted its Travel Policy in 2012, well before I arrived in 2015. During my orientation, I was trained to handle reimbursements just as they had been handled since 2012 – which was for the executive director to pay in advance for meetings, travel, and other Regional Coalition expenses, and then submit a reimbursement request to Los Alamos County. This is exactly what I did.

The Coalition’s Treasurer, Santa Fe County Commissioner Henry Roybal, had the responsibility to approve or disapprove all reimbursement requests. In practice, he shared this duty with Los Alamos County.As I have stated numerous times, I take full responsibility for several improper requests – alcohol consumed at board member meals and baseball tickets for board members and Department of Energy guests for example – and refunded the Coalition for those board costs months ago. However, the State Auditor alleges that $51,519.45 in reimbursements over the past four years, including $26,862.18 that I paid for out of my own pocket for expenses for RCLC business and its board members, were unauthorized. This is not true. All reimbursement requests were authorized, including improper ones, by either Treasurer Roybal and/or by Los Alamos County, and was reported publicly in every RCLC meeting.

Excepting improper reimbursements, there are two original sins that account for most of the findings in the Audit. First, the Regional Coalition enacted its own Travel Policy in 2012, when it should have acted as a state entity and been covered under the existing state regulations for travel and reimbursement, including caps on per diem. Los Alamos County informed the Coalition in late 2017 that it had provided the Coalition the wrong travel policy and took sole responsibility for this mistake.

Second, acting on incorrect advice from Los Alamos County, the Regional Coalition never conducted annual audits, which it would have otherwise invited, and would likely have resulted in the discovery of these errors earlier. Neither I, nor any board member, knowingly or deliberately violated any standard for reimbursement. Both the State Auditor and the law firm hired by Los Alamos County reached the same conclusion. When I paid for hotel rooms and airline tickets on my personal credit card, it was for RCLC travel to important meetings. When a board member agreed to take time out of his or her schedule and attend a trip out of town on behalf of RCLC, and was promised reimbursement for his or her airfare and hotel, there was no intent to exceed the state’s travel policy, because the Regional Coalition was not operating under those sets of regulations. We were all acting in good faith to try to do the business of the Regional Coalition. No one benefited financially from these errors – in fact, no one knew we were acting in error.

Similarly, there was no attempt to cover up or hide changes to my contract or the Coalition’s Travel Policy. With Los Alamos County’s lead, we were attempting to identify a solution to the issues raised. Although I am no longer with the Coalition, it is my understanding that the fixes we were seeking to make, were included in the revised contract offered to the new Executive Director Services contractor.

Finally, the Adams+Crow report suggests that reimbursement practices were done to avoid the approval process. Nothing could be further from the truth. The Los Alamos County and Treasurer reviewed all expenses each month before issuing payment; expenditures of the Coalition were presented, and a budget was reported by Los Alamos County publicly at every RCLC meeting; any and all travel was pre-approved by the Board; and all financial documents were public. Further, all reimbursements had been approved, either by Treasurer Roybal and/or Los Alamos County.

I remain committed to working with the Coalition, Los Alamos County and the State Auditor. I would also urge that if there are any additional improper reimbursements, the State Auditor determine what those are and asks the responsible party to pay them back.