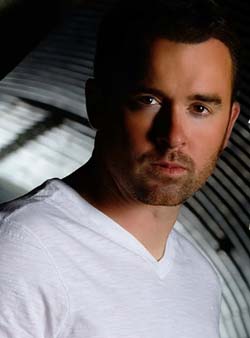 The deal comes just prior to Carothers’ performance from the DRX Artist Showcase stage at 3rd and Lindsley, at 6 p.m. Tuesday. Hosted by singer/songwriter and SiriusXM “Prime Country” personality Deborah Allen, the event will stream live HERE; Facebook fans can learn more at FB Events.

Carothers honed his chops on the Southwest touring circuit and lived in Los Alamos. His wife Jill Osenbaugh Carothers worked at Los Alamos County until the couple’s recent move to Nashville.

“It was important to me to get back to my roots,” Carothers said about his move to Nashville. “And this is still where the rubber meets the road on the business end of things.”

Carothers is hailed for his “gut-bucket baritone”, compelling songwriting and commanding stage presence. The entertainer is easily winning over even the most-jaded movers and shakers in Nashville, including MusicRow magazine’s Robert K. Oermann, who recently reviewed “I Must Be Alive.”

“This moaning ode to a lost love has a super deep resonance and burning passion. As a song, it’s quite well crafted, with admirably dynamic melodic range as well as sturdy lyrics,” Oermann said.

The single continues to gain support with radio programmers and is “On Deck” – soon to be charting on MusicRow.

Carothers, who has been compared to Waylon Jennings and Jamey Johnson, produced his current CD, HONKY TONK LAND (Renegade Mountain Records). An eight-track tour-de-force of true Country music, the disc features seven Carothers’ originals, and takes the listener back to a time when songs of life’s triumphs and struggles filled the Country airwaves. The album is available for purchase now at iTunes, Amazon, Amazon UK and GooglePlay.

A native of McNairy County, Tennessee, James spent his boyhood leading the a cappella choir at the local Church of Christ before the family moved out west. After 20 years as a resident of New Mexico, Carothers has returned to his Southern roots, bringing his young family to Nashville this year. Considered a star in-the-making by some of the music industry’s top pundits, he comes by his Country style honestly, counting Waylon, Willie, Merle and Johnny Cash as major overall influences, while naming Keith Whitley and George Jones as inspirations for his distinctive phrasing and singing. As a writer, he admires the talents of Billy Joe Shaver and Hank Williams. An adept lead guitar player ala Vince Gill, James is an engaging entertainer who leaves his audiences clamoring for more after every show. http://JamesCarothers.com  https://www.facebook.com/JamesCarothersOfficial