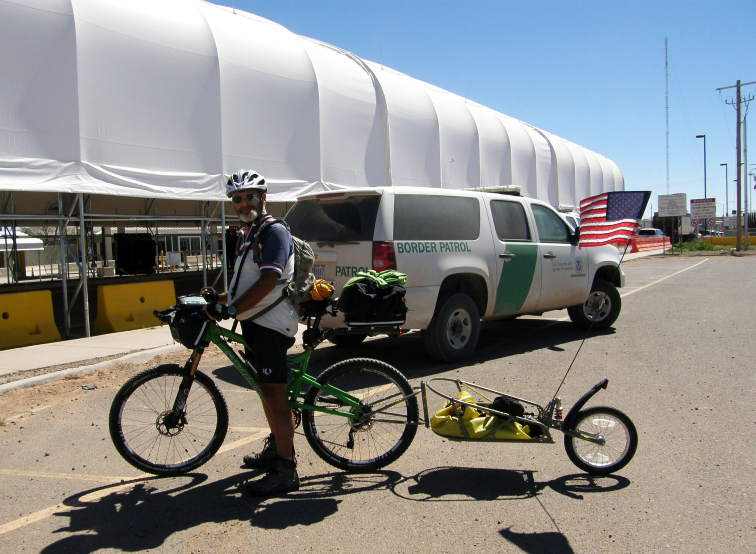 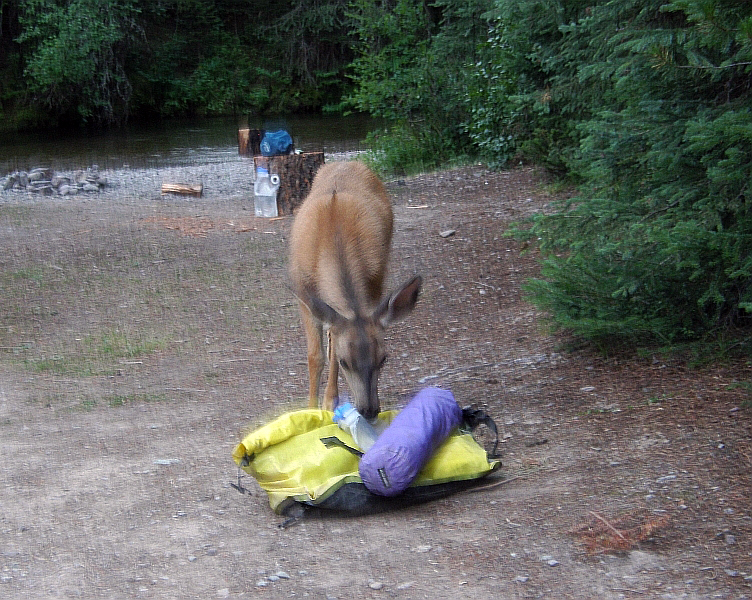 Attracted to the salt, this deer ate Jack Killeen’s glove, the inside of his bike helmet and one of the white arm guards he wore to protect against the sun. Photo by Jack Killeen

It was 3 a.m. and the sound of a large animal outside his tent brought former Los Alamos National Laboratory Security Division Leader Jack Killeen to his feet. When the moon cleared and illuminated his isolated campsite, Killeen saw a deer eating his belongings.

“I chased him off three times but he kept coming back to suck the salt out of my clothes,” Killeen said during a recent interview at the Los Alamos Daily Post headquarters. “He ate one of my gloves, the inside of my bike helmet and one of the white arm guards I wore to protect against the sun.”

Killeen retired from LANL in mid-July and left on his adventure through the wilderness a week later. Loading his bike and camping equipment into the back of his pickup, Killeen traveled to the Whitefish Bike Retreat near White Fish, Mont., to begin his nine-week, 2,700 mile trek. Cricket Butler, being an enthusiastic cyclist, created the retreat that now draws cyclists from Canada, the U.S. and Europe to enjoy the best trails and routes Montana has to offer.

Killeen spent the night at the retreat then rode the Great Divide Trail south, crisscrossing the Continental Divide and staying in campsites along the way. Occasionally he found a bed and breakfast where he showered and washed his clothes before heading back into the wilderness. The route Killeen traveled took him through a part of Idaho, through the Red Desert and Great Divide Basin in Wyoming and into Colorado where he encountered a 100 year flood.

“I had to hunker down for a while and then travel by pavement for several days,” he said. “The western Wyoming stretch was really tough – the rangers told me they couldn’t guarantee me water for 225 miles.”

Along the way, Killeen was adopted by a group of Mormons who gave him water and let him stay the night.

“People would stop and tell me I was crazy but then give me power bars and water,” he said.

Killeen experienced firsthand the impact of good nutrition. After eating good meals, he could ride until 5 p.m. without any problem, but would wear out by 1 p.m. in remote areas where small stores only carried things like ramen noodles and spaghettio’s. Killeen lost 32 pounds during his nine-week ride. 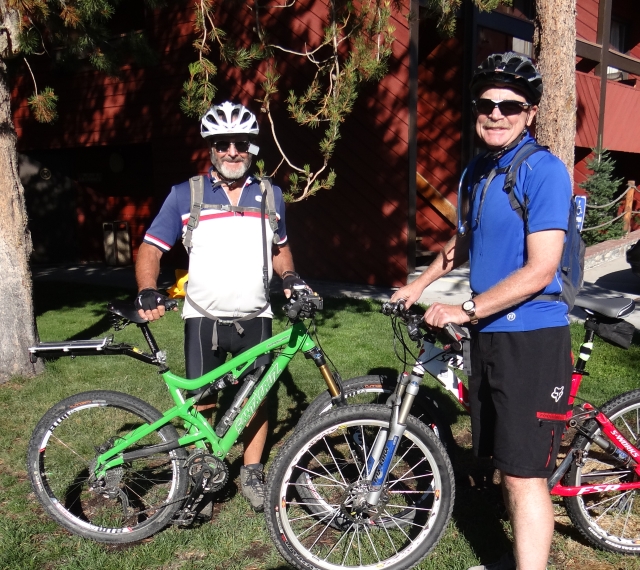 Friends and fellow riders tracked Killeen’s progress as he pedaled through Montana and Wyoming through his SPOT Satellite GPS Messenger service.

That cadre included Killeen’s replacement as the LANL Physical Security Division Leader, Mike Wismer. According to Wismer, he was a bit envious of the adventures Killeen was experiencing on his scenic tour of the Continental Divide.

As he tracked Killen’s progress, Wismer “became concerned” that Killeen might be longing for news regarding LANL’s security program and might need an update and decided to join Killen for a portion of the ride so he could swap security stories, Wismer recently told the Los Alamos Daily Post.

“That was as good of an excuse as any to venture out to Colorado to try to connect with that solo cyclist,” Wismer said. “After extrapolating his position and comparing our respective schedules, my wife Lisa and I drove to Dillon, Colo., on Friday, Sept. 6 and met with Jack and had a nice dinner. I hardly recognized him. He had a beard and had lost 30 pounds or so. He was beaming with stories and tales from the trail. Much to my dismay, he wasn’t at all interested in my security update.”

Wismer and his wife took a fun ride with Killeen Saturday, then Killeen and Wismer peeled off for an exciting but challenging ride up to Vail, Colo., and back down.

“The next day, I rode to Breckenridge with Jack and we said our goodbyes. It was a great two days of cycling and storytelling. I admire Jack for completing that trip, all 2,700 miles of it,” Wismer said. “We offered to stage water for him but he wouldn’t have any of that. He had to change his route of few times to make sure he always had a water source but he made it. It’s a great accomplishment and I was thrilled to have spent a few days with him.”

Alone again, Killeen’s journey continued into New Mexico, through Chama, Abiquiu, Cuba, over to the Navajo Nation, Malpais and Silver City and ended at Palomas just this side of the Mexican border.

“I saw three grizzles and one wolf but they were all at a respectable distance,” Killeen said. “There were thousands of antelope, wild horses and varmints and I saw a bald eagle snatch a seagull out of the water in Montana. There were no black bears on my trip.”

Killeen logged six to nine hours a day on his 26-inch Santa Cruz lightweight mountain bike and Beast of Burden trailer. He averaged 45-50 miles a day and recalled his shortest day was 26 miles over bad roads and steep climbs in Montana. His longest day was 68 miles along the route through Abiquiu. The final third portion of his trip, Killeen said was a lot more black top than he had planned due to the fierce storms in Colorado and New Mexico that trashed the trails. He had one flat tire on his trailer the entire trip, adding that he replaced his tires in Salida, Colo., because they were worn down.

“I had planned to make this kind of ride for four or five years, Killeen said, but it was a combination of restorative physical fitness beyond what you can do working long hours and my love of the wilderness that made me want to do it.” 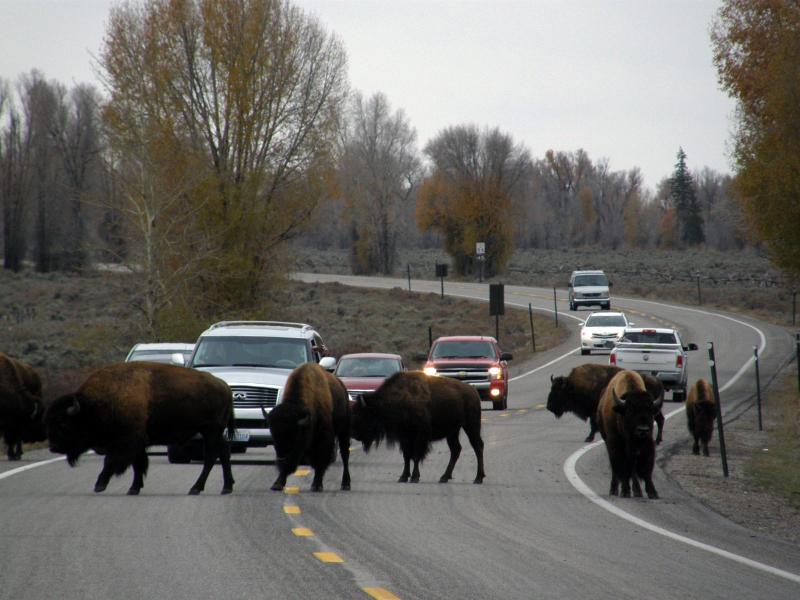 Buffalo meander across the road. Photo by Jack Killeen 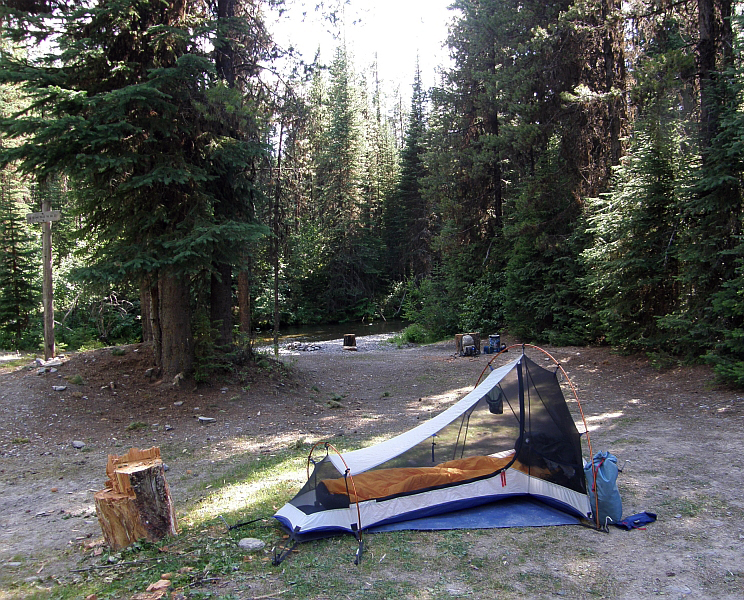 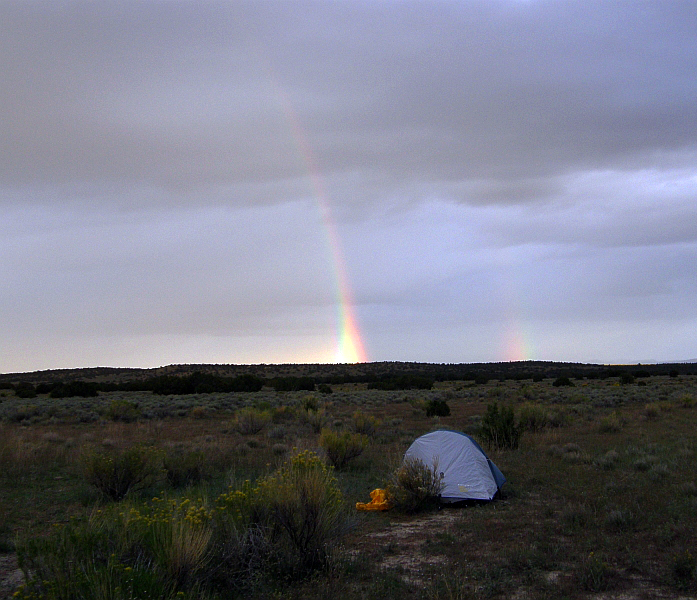 A double rainbow in the sky reflects the many unique sights Jack Killeen encountered riding his mountain bike through the wilderness. Photo by Jack Killeen