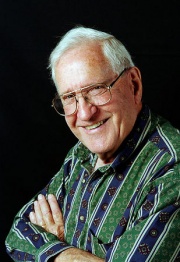 Agnew was present at Fermi’s first neutron chain reaction Dec. 2, 1942, director of the Los Alamos Scientific Laboratory for 10 years and for 10 years president of General Atomics.

He had been afflicted with chronic lymphocytic leukemia since spring.

Agnew worked on the Manhattan Project at Los Alamos from 1943 to 1945. He flew as a scientific observer during the mission to Hiroshima Aug. 6, 1945 to measure the yield of the atomic bomb explosion.

After completing his graduate degree under Fermi at the University of Chicago in 1949, Agnew returned to Los Alamos, and became the laboratory’s Weapons Division leader from 1964 to 1970. He served as Laboratory director from 1970-1979.

Agnew retired from Los Alamos in 1979, and served as a scientific advisor to NATO, chaired the General Advisory Committee of the Arms Control and Disarmament Agency (1974-1978), and served as White House science councilor (1982-1989).

Agnew received the E.O. Lawrence Award (1966) and the Department of Energy Enrico Fermi Award (1987). Along with Hans Bethe, Agnew was the first to receive the Los Alamos National Laboratory Medal.