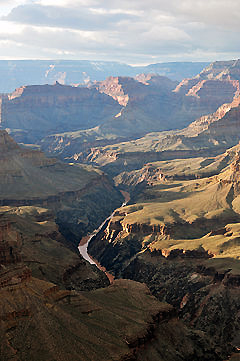 View from Mohave Point of the Colorado River flowing through the Grand Canyon. Courtesy/wikipedia
EJ News:
FLAGSTAFF, Ariz. — The U.S. Forest Service on Friday began paving the way for a sprawling urban development near the southern edge of the Grand Canyon that would include more than 2,100 housing units and 3 million square feet of retail space along with hotels, a spa and conference center.
The superintendent of Grand Canyon National Park has called the project one of the greatest threats to Grand Canyon in the 96-year-history of the park.
The proposal, by the Stilo Development Group, would transform the 580-resident community of Tusayan, Ariz.— which sits near the southern entrance to the national park — from a small, quiet tourist town into a sprawling complex of high-end homes, strip malls, and resorts only a mile from the Grand Canyon National Park boundary.
Stilo has partnered with the town of Tusayan in order to obtain the federal permit needed to expand road and utility access through public lands within the Kaibab National Forest so development can proceed. The agency today began moving forward with the process to approve that special-use permit.

“The Forest Service is putting Grand Canyon National Park in the crosshairs by considering Tusayan’s dangerous, damaging plan for a mega-resort,” said Kevin Dahl of the National Parks Conservation Association. “This proposal is not in the public interest and is one of the greatest threats Grand Canyon National Park has seen in its history. The Forest Service can and should have rejected it out of hand.”
The National Park Service considers the mega-development a significant threat to Grand Canyon because it will require vast quantities of water and could lower the aquifer that feeds seeps, springs, and streams that support wildlife and recreation on the park’s South Rim. Groundwater pumping accompanying the development could also lower the aquifer that is the exclusive source of all water for Havasu Falls, the cultural foundation of the Havasupai tribe.
“The Forest Service is paving the way for foreign investors to exploit America’s most treasured natural landmark all to turn a profit,” Earthjustice attorney Ted Zukoski said. “The Forest Service is throwing out its responsibility to serve the public interest by endangering the water, wildlife, and wilderness that make the Grand Canyon so special.”
Earthjustice, on behalf of the National Parks Conservation Association, the Grand Canyon Trust, Sierra Club, and the Center for Biological Diversity, has submitted a letter protesting the Forest Service’s consideration of the rights-of-way permit. The city of Flagstaff and regional businesses have already passed resolutions opposing this development, saying that it would negatively impact surrounding communities and Grand Canyon National Park.
“When President Theodore Roosevelt protected Grand Canyon in 1908, he stated: ‘Leave it as it is. You cannot improve on it. The ages have been at work on it, and man can only mar it.’ Teddy was right. It will be a stain on President Obama’s legacy if he allows for this defacement of Grand Canyon,” said Sandy Bahr of the Sierra Club.
This latest development project comes amid concerns from conservation groups and tribal communities about proposals for re-starting operations of a nearby uranium mine and another major resort development right outside the park at the confluence of the Colorado and Little Colorado rivers.
“Whether it’s uranium-mining companies or greedy developers some will always see the Grand Canyon as a cash register, not one of Earth’s most awe-inspiring and precious places,” said Robin Silver, a founder of the Center for Biological Diversity. “This is a place worth fighting for. We plan to fight shoulder to shoulder with millions of other Americans to defeat this latest scheme to commercialize the Grand Canyon. Shopping malls don’t belong here.”
The Forest Service will take public comment on the proposal through June 3. The Forest Service will also hold informational meetings on the proposal in Tusayan (May 19), Williams (May 18), and Flagstaff, Ariz.(May 20).
Letter to Forest Service: http://earthjustice.org/
Forest Service’s April 24 announcement:  http://www.fs.usda.gov/
Online Version: http://earthjustice.org/news/
Menu
Los Alamos
43°
Fair
6:35am5:59pm MST
Feels like: 34°F
Wind: 16mph WSW
Humidity: 14%
Pressure: 29.8"Hg
UV index: 0
SunMonTue
37/23°F
39/25°F
48/30°F
Weather forecast Los Alamos, New Mexico ▸