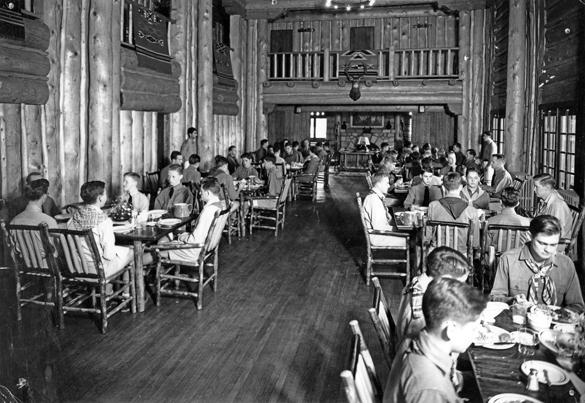 Boys of the Los Alamos Ranch School at dinner in the Dining Hall at Fuller Lodge, ca. 1930s. Courtesy photo

As Thanksgiving approaches, thoughts turn to food and get-togethers of family and friends. When you gather ‘round with loved ones this holiday season, remember some warm excerpts from Los Alamos history related to food.

From a memoir by Doris Barker, the 1930s’ dietician and housekeeper at the Ranch School:
There was no way a boy could break the dietary rules. At dinner and supper each boy was required to take and eat an average portion of each item of food served. If he wanted a second serving of meat, he was required to eat a second serving of vegetables (except potatoes). If any item of food was passed by, the young man was invited to eat at Mr. Connell’s table where he was served only the food he had refused until he voluntarily agreed to never repeat the incident.

In one comical incident I recall, Tommy Waring, one of the masters, did not like rabbit. At a Sunday dinner, Tommy caught my attention and raised his eyebrows. I nodded my head, yes, it was chicken; he understood it to mean yes, it was rabbit. He wasn’t at all happy when he discovered he had passed up fried chicken.

From The House at Otowi Bridge by Peggy Pond Church:
The civilians who came to work at Los Alamos were also closely guarded and apparently never allowed to leave the mesa. But in the early spring of 1943 the civilian head of the project began coming down once a week with his wife to Edith Warner’s house for dinner [at Otowi Crossing]. Curiously enough he turned out to be a man she knew. Looking a little like the slim and wiry hero of a Western movie, in blue jeans and cowboy boots and spurs, he had stopped at the little house years ago at the beginning of a pack trip. Edith had given him tea and a slice of the magical chocolate cake that seemed to compel whoever tasted it to come back for more. This man too had come back…

Oppenheimer persuaded the military authorities to let small groups of men and women come down from “the Hill” for dinner at the little house by the river. Caught up as he now was in the whirlpool of war, the furious plans to construct a deadly weapon, the impossible and often agonizing decisions that must be weighed and implemented from day to day, and often from moment to moment, he never forgot that the heart must have its nourishment. He sensed that uprooted people had a particular need that these hours at Edith’s house could fill…

The meals that Edith served were always simple: a stew flavored with herbs on big terra-cotta Mexican plates; posole, an Indian dish made of parched corn; lettuce in a black pottery bowl; fresh bread; a sweet tomato relish; watermelon pickles, spiced peaches or apricots; a dessert of raspberries. Tilano served and sometimes joked a little, his long braids swinging as he poured hot coffee into big pottery cups.

From Standing By and Making Do: Women of Wartime Los Alamos, Jane S. Wilson and Charlotte Serber, editors:
We had a commissary on the mesa, and there were sharp differences of opinion as to how cheap or how good it was. Many of the national shortages hit us until we were groggy. We had, as well, a flurry of local shortages unique, as far as I know, to Los Alamos. Fruits and vegetables, doubtless weary and ailing to begin with, made the long trek from Santa Fe and expired on the commissary shelves. Fresh eggs were never available, but after the housewives howled for months, the post veterinarian candled each egg before it was sold. Canned goods often went unlabeled, and when the brands could be identified, they were usually unfamiliar. Meat, on the other hand, was good and remarkably inexpensive. …

We could also eat at Fuller Lodge, which would serve splendid food for a few months and then slump back to its usual standard of mediocre cooking. There were two civilian mess halls about which I can, after a great deal of thought, find only one good thing to say: they were cheap. The cafeteria was a much later and much better development. For once, something was large enough for our needs and did not require an annex the month after it had been built. It was a splendid place to eat. “Steak night” occurred once a week, and with inch-thick filet mignon that cost a dollar, cuisine at Los Alamos reached its all-time peak.

From all of us at the Los Alamos Historical Society: Enjoy your food and Happy Holidays!