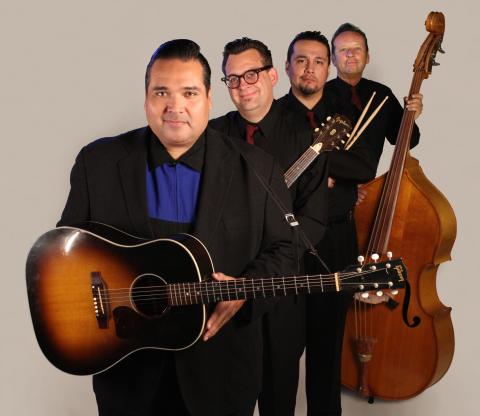 In those years, the Boys have released 14 albums, traveled hundreds of thousands of miles all over the world and have played over 3,000 concerts, including a dynamite show in Los Alamos about ten years ago. Welcome back Big Sandy.

The band coming Friday will be pretty much the same guys that started out in Sandy’s Anaheim garage in 1988. They still play swing and rockabilly plus doo-wop, honky-tonk, R&B, Soul and have lately added a touch of folk, bluegrass, Cajun, Mariachi and even some reggae and ska-influenced tunes.

Big Sandy & His Fly-Rite Boys are members of the Rockabilly Hall of Fame in Jackson, Tenn., along with such music icons as Elvis, Carl Perkins, Chuck Berry, Wanda Jackson, Bill Haley, Brian Setzer and Link Wray ─ a fantastic fraternity. The band has been featured on “Late Night With Connan O’Brien,” NPR’s “Fresh Air,” and “All Things Considered” and have played The Grand Ole Opry.

Growing up, Big Sandy says he was influenced by Ray Charles, Bob Wills, Hank Thompson, Spade Cooley, Gene Vincent, Hank Williams and Elvis. Sandy says he plays the country style boogie of the late ‘40s and early ‘50s. He calls it “Hillbilly Bop.” If you have any 50’s styles clothing or western wear, this would be a good time to get duded up.

You can read about and listen to Big Sandy & His Fly-Rite Boys at YouTube, his Face Book page and www.bigsandy.net. I do believe that all people and at all ages will really enjoy this show. That goes for you metal heads and even rap lovers. Hey, this is something different and good. Besides there are lots of nice people hanging around and ready for you to check them out and for them to check you. Oooh!

Next Friday, Aug. 2, we’ll bring back one of the best acts from last year, the Guy Forsyth Band. It’ll be a night of Texas blues-rock. He has loads of great energy and his music is rowdy fun. He was a founding member of the Asylum Street Spankers for those of you that can dig that. Check Guy out at www.guyforsyth.com and all the other places on the net. he has a very cool website! This show will be Credit Union Night with special thanks to Del Norte Zia. and the Los Alamos  Schools Credit Unions.

Try hard to make these shows or we’re gonna be having a great time without you!