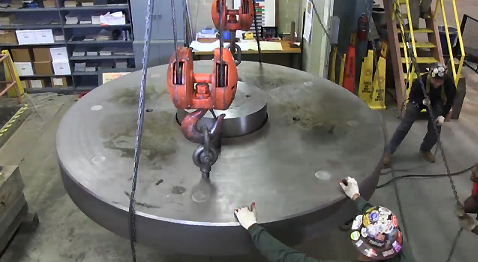 MILLION-POUND MAKEOVER: Highlights of the disassembly of NIST’s 4.45-million newton (1 million pounds-force) deadweight machine, the largest in the world, in preparation for cleaning, restoration, and recalibration. Video by Jennifer Lauren Lee. Courtesy/NIST

For the first time in half a century, NIST’s 4.45-million newton (equivalent to one million pounds-force) deadweight machine – the largest in the world – is being disassembled for cleaning, restoration, and recalibration. 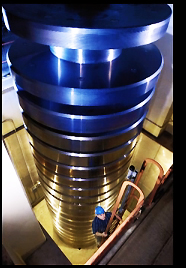 The first stage of the process, dismantling the top half of the three-story stack of weights, is now complete and the individual pieces are being cleaned in preparation for recalibration.

Customers who rely on this unique machine include US aerospace manufacturers, US military laboratories, and several top-end commercial force calibration labs, which have performed hundreds or thousands of calibrations, all directly traceable to NIST.

Built in 1965, the deadweight system consists of a stack of 20 stainless steel discs about three meters in diameter (a little less than 10 feet) when assembled. Their average mass is about 22,696 kg (just over 50,000 pounds) each.

In addition to cleaning and recalibration, some of the surfaces deep within the weight stack are being restored by minor machining to permit more free operation at those interfaces. Theorists are also modeling the stack to give researchers insight into the deflections occurring where the stresses are highest.

Dismantling the weight stack took several weeks, because each piece had to be unbolted and carefully lifted with a series of cranes. Watch the video reel here for highlights of the disassembly process.

The machine is expected to be back online later this year.

The National Institute of Standards and Technology (NIST) is an agency of the U.S. Department of Commerce.