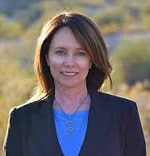 Brenda Burman
DOI News:
WASHINGTON, D.C. ― The U.S. Senate Friday confirmed Brenda Burman as the U.S. Department of the Interior Bureau of Reclamation Commissioner. She is the first woman to ever lead the Bureau.
“Finally! After more than 142 days, I’m excited to welcome Brenda Burman to lead the Bureau of Reclamation,” said U.S. Secretary of the Interior Ryan Zinke. “Brenda is a veteran of the Bureau and her extensive experience on water projects across the country will be an incredible asset for the Department. After senseless and unprecedented hold-ups in the Senate, we can finally move forward with key water projects across the country.”
“I am deeply honored for the opportunity to lead this organization,” Burman said. “The employees of Reclamation are dedicated to working through the most difficult water issues and managing water in the West. I look forward to working with Secretary Zinke, the Administration, and our many partners, contractors, and customers to solve our most pressing water issues.”
The Bureau of Reclamation is a contemporary water management agency and the largest wholesale provider of water in the country. It delivers water to more than 31 million people and provides one out of five western farmers with irrigation water for farmland that produces much of the nation’s produce. Reclamation is also the second largest producer of hydroelectric power in the western United States.

Burman is the first female to lead the Bureau. From 2006 to 2008, she served as Reclamation’s Deputy Commissioner for External and Intergovernmental Affairs and the Deputy Assistant Secretary. Burman comes to Interior after working as the Director of Water Policy for Arizona’s Salt River Project. Prior to that, she worked for the Metropolitan Water District of Southern California, The Nature Conservancy, and U.S. Sen. Jon Kyl. She earned her Juris Doctor degree from the University of Arizona College of Law and a Bachelor of Arts from Kenyon College.