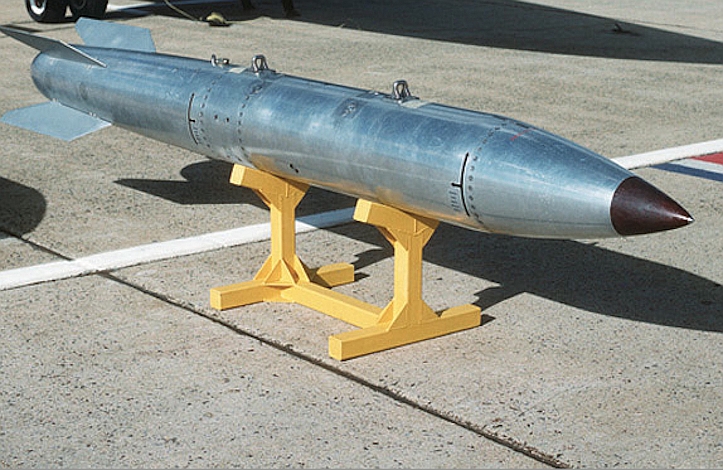 A B61 nuclear gravity bomb. Courtesy/DOD

The role Los Alamos National Laboratory plays in stockpile stewardship is the focus of the final 70th Anniversary Lecture at 5:30 p.m., Dec. 18 at the Bradbury Science Museum. Jon Ventura, Los Alamos’s executive staff advisor to the Principal Associate Director for Weapons Programs, will give the talk.

“For 70 years the men and women of Los Alamos have explored the frontiers of science and engineering to meet a broad array of national security challenges,” Ventura said. “The core mission of the Laboratory has been and continues to provide the nation with a safe, secure and reliable nuclear deterrent, which remains a cornerstone of national security.”

Ventura’s talk, titled “Stockpile Stewardship: Keeping the Nation’s Stockpile Safe, Secure and Reliable with Science and Engineering,” will highlight some of the experimental, engineering and computational tools used to monitor nuclear weapons. The talk will also focus on how the Laboratory fits into the broader Department of Energy and National Nuclear Security Administration complex, the relationships with United States’ armed forces and how stewardship tools solve national security challenges.

For decades, the Laboratory designed, tested and built weapons for the stockpile; however, that paradigm shifted from 1989 to 1992 with the closure of Rocky Flats, the end of nuclear testing and the collapse of the Soviet Union. The new paradigm, stockpile stewardship, is based on a scientific understanding of weapon performance through a comprehensive suite of experimental activities, improved modeling and simulation capabilities, enhanced surveillance techniques and restoring critical manufacturing capabilities needed to support the stockpile, Ventura said.

His professional career includes direct support to the U.S. Air Force and the Inter-continental Ballistic Missile Modernization Program under President Reagan and more than 15 years as the executive officer to five assistant secretaries of Energy for Defense programs in Washington, D.C.