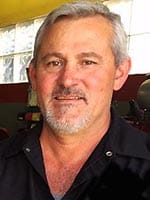 Fidel J. Naranjo, 52, of Los Alamos has been charged with aggravated battery with a deadly weapon following a May 31 incident in Santa Fe County in which he shot another man, Michael Gonzales in the leg.

Naranjo also is charged with two counts of aggravated assault against Andrew Gonzales and Monica Tarango and carrying a firearm while under the influence of an intoxicant or narcotic.

According to documents filed in Santa Fe Magistrate Court, Santa Fe County patrol deputies responded at around 10:30 p.m. to an address on Mystic Lane in Santa Fe to reports that a man had been shot and that the subject was still on the scene.

Andrew Gonzales told Arndt that Heck was in the doorway behind his brother and Naranjo while they were arguing. He said when the physical altercation took place, Naranjo raised the gun and chambered a round. He said at that point, Heck was between his brother and Naranjo, that Naranjo fired the first round and shortly after, fired the second round hitting Michael Gonzales in the leg.

Tarango told Arndt she was in the back of the vehicle talking on her cell phone and that when she heard the first shot she looked up and thought she saw Michael Gonzales and Naranjo in a physical altercation. Tarango said the second shot was 30 seconds to a minute later and that Michael and Andrew Gonzales walked back to the vehicle while Naranjo continued to point the gun at them as Andrew Gonzales spoke on the phone with the 911 operator.

Arndt’s report indicates that Michael Gonzales told Det. Eric Eccles at the hospital that he had texted Naranjo earlier in the evening and Naranjo had told him to come on over. He told Eccles that when he arrived, Naranjo was holding a gun and had pushed him. He said he had defended himself by pushing Naranjo back and that Naranjo had fired one round toward the vehicle and the second round struck him in the leg.

Heck, who lives with Naranjo, told Arndt he had been texting Michael Gonzales for Naranjo earlier in the evening and that Michael was claiming Naranjo owed him money for landscaping work. He texted Gonzales telling him that Naranjo said he was squared up because of $200 he had paid him the previous week. He told Arndt he thought Naranjo had gone to sleep but he woke up and told Heck that Michael Gonzales threatened him over the phone and was coming over for his money.

Heck said he was not present when Naranjo opened the door but when he approached the two men, Naranjo told him Michael Gonzales punched him in the face. He said he saw Naranjo with the gun in his hand so he walked in front of him. He said Naranjo fired one shot which, caught everyone off guard and then brought the gun down and shot it a second time hitting Michael Gonzales in the leg. Heck told Arndt he did not hear or see the threats or the physical assault. He said Naranjo put the gun in the house, and he, Heck, called 911.

Naranjo told Arndt he owns a body shop at the Mystic Lane address and that Andrew Gonzales worked for him. He said he hired Michael Gonzales to do yard work on Mondays and Tuesdays and would pay him $200 on Wednesdays. He said he told Michael Gonzales he couldn’t afford to employ him. Naranjo told Arndt he went to work at his other business, the Kwik Lube in Los Alamos on Trinity Drive, and that when he came home he had a couple of small Coronas and a shot of Fireball while he watered his plants.

Naranjo stated he had been contacted by Michael Gonzales by text and phone call claiming Naranjo owed him money for work done May 26 and had told Gonzales he paid him for that work and didn’t believe he owed him any money. He claimed Gonzales told him on the phone that he needed to pay him or he was going to bash his head in and go to his house to collect. Naranjo said Gonzales sounded like he was amped up and seemed to be talking to someone else as well making it hard to have a conversation with him. He said he didn’t think Gonzales was going to come to his house but he put his .40 caliber pistol by the door.

Naranjo claimed that when he opened the door Michael Gonzales punched him in the mouth and then punched him in the face and head five times. He said Andrew Gonzales never battered him but was coming at him. Arndt’s report states that Naranjo claimed that during the physical altercation he was able to reach for his pistol, remove it from the holster, rack the slide on the pistol and point it at the Gonzales brothers, telling them to get the (expletive) off his porch. He claimed the two brothers kept coming at him so he fired two shots above their heads. He said they didn’t stop so he shot Michael Gonzales in the leg.

After that, Naranjo said the two brothers backed up and told him they were calling the police. He said Heck came to the door after the altercation and he repeatedly said he fired two shots into the air to back the Gonzales brothers off and chose to shoot Michael Gonzales because he didn’t want to kill him.

Arndt’s report states that he didn’t see any injury on Naranjo consistent with him being involved in the physical altercation he alleged took place. He states that Naranjo gave a descriptive account of the force he claimed Michael Gonzales used on him but that he did not observe any swelling, bruising, blood or redness to Naranjo’s face, cheeks, chin, mouth or teeth. Arndt also said statements from witnesses did not corroborate with Naranjo’s statement.

Naranjo has been slated for a preliminary hearing June 27 before Santa Fe Magistrate Court Judge George Anaya, Jr. Conditions of release were granted with a $5,000 unsecured appearance bond and GPS after the Court found Naranjo poses a danger to the alleged victims and the community at large.