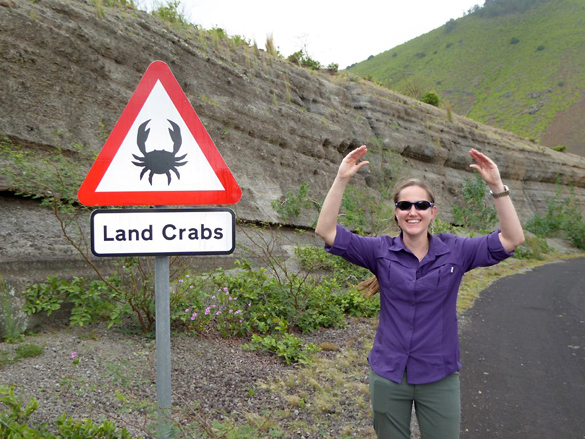 Allison C. Aiken is a chemist at Los Alamos National Laboratory in the Earth and Environmental Sciences Division. In 2014, at the age of 34, she was named one of  ‘The World’s Most Influential Scientific Minds’ by Thomson Reuters for being in the top 1 percent of geoscientists to have her work cited. She is posing in front of a crab sign on Ascension Island, where she installs instruments to collect data about black carbon aerosols. The island is tropical, but very isolated with rugged volcanic terrain and dominated by non-native species. There are, however, some interesting and rare indigenous species, such as large land crabs, marine crabs, nesting sea turtles, frigate birds, and three species of boobies. Most of the human residents are associated with the two military bases for the United States and United Kingdom. Courtesy/LANL

Each year, during the dry season, a large swath of the African countryside goes up in flames. During two distinct seasons—October through March in the northern hemisphere, and June through November in the southern hemisphere—fires are set to clear land, remove dead and unwanted vegetation and drive grazing animals to less-preferred growing areas. This is called “biomass burning,” and Africa is responsible for an estimated 30 to 50 percent of the total amount burned globally each year. Biomass burning also occurs when fires start naturally (such as after a lightning strike on the savannah), but they’re rare. Worldwide, 90 percent of biomass burning can be attributed to humans.

In addition to large-scale fires, biomass is a primary source of cooking fuel for 753 million sub-Saharan Africans, or 80 percent of the population. This takes place year-round and is a serious health risk to those who use it. According to the International Energy Agency, about 1.3 million people—mostly women and children—die prematurely each year because of exposure to indoor air pollution from biomass.

But the negative impacts of biomass burning are actually much bigger than that. Whenever biomass is burned, small particles, known as aerosols, escape into the air. Among these aerosols is black carbon, the strongest light-absorbing component of particulate matter. So when black carbon is released into the atmosphere, it heats up the air, which can mean bad news for the climate. At least half of the black carbon in the atmosphere is a result of biomass burning—and most of that comes from Africa.

All those fires form a plume of smoke that’s stretching across the Atlantic—from Angola to Brazil. In the middle of its path is Ascension Island, where instruments are collecting data about the aerosols within that plume. My job, along with a team of other scientists, is to ensure high-quality measurements and study the data to help us answer critical questions about biomass aerosols. For example, how much of these aerosols are purely light absorbing (black carbon) and thus contribute to global warming? How much are light scattering and thus reflect light, helping to cool the planet? And how much both absorb and scatter light?

The instruments on Ascension Island take a broad range of measurements from the plume, including particle number, size distribution, water uptake properties, and chemical composition (ammonium, nitrates, sulfates, and more) to help us answer these questions. Our goal: to understand how biomass aerosols age in the atmosphere as they make their trip across the Atlantic. This is important because, as black carbon ages, more organic aerosols can condense onto it. That can trigger a greater uptake of water, which in turn aids in the creation of clouds. Our current climate models don’t factor in this process (some try, but not accurately), which means we’re not getting a complete picture of the impacts biomass burning has on the environment.

We’ll compare the information from these instruments to data we’ve acquired from controlled laboratory experiments burning African grasses and other biomass fuels. We’ll then combine the data to refine global atmospheric models of climate change. The better models we have, the better we can understand—and combat—climate change.

I do this work through FIDO, a field operations team funded by the Energy Department’s Office of Science’s ARM Climate Research Facility, as part of my job as a chemist at Los Alamos National Laboratory. Aerosol research at Los Alamos began decades ago, stemming from a need to better understand nuclear fallout, specifically the feedbacks between particles, clouds, land-atmosphere interactions, and the hydrological cycle—the infamous “nuclear winter.” It’s interesting to think that the work to understand the harmful impacts of a very modern technology is now helping us understand the harmful impacts of a tool as old as civilization itself: fire.

As we gather data from the instruments on Ascension Island and apply them to climate models, I’m hopeful that we’ll have a better understanding of how biomass burning alters our environment. Armed with that information, perhaps alternative, affordable methods for clearing land and cooking meals that are safer for both people and the environment can be championed and put to use in even the most remote and underdeveloped parts of our world.