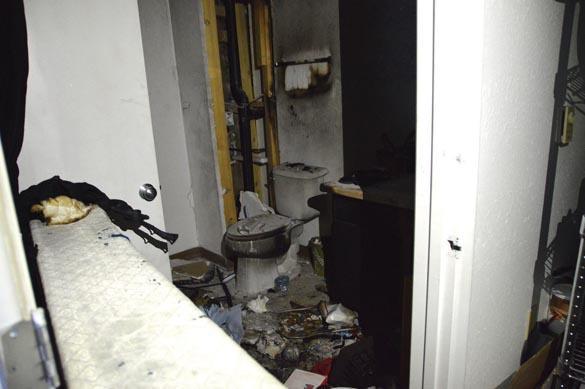 The bathroom where an explosion from a marijuana wax process occurred in May 2016 at the Caballo Peak Apartments on Canyon Road. Photo by Carol A. Clark/ladailypost.com
By MAIRE O’NEILL
Los Alamos Daily Post
marire@ladailypost.com

Joseph Gonzales, accused of causing an explosion at an apartment at 3301 Canyon Road in Los Alamos in May 2016 has been indicted on three counts in U. S. District Court and is slated for a jury trial Oct. 2 in Albuquerque.

Gonzales is charged with endangering human life while illegally manufacturing a controlled substance, manufacturing a controlled substance and maintaining a drug-involved premises. The indictment was unsealed July 31 following his arrest and Gonzales was arraigned Aug. 1 before Magistrate Judge William P. Lynch. Federal Public Defender John Van Butcher has been appointed to represent him.

Gonzales was originally slated for a preliminary hearing May 4 in Los Alamos Magistrate Court almost a year after the incident. A criminal complaint filed in November 2016 charged him with negligent arson, child abuse, attempted distribution/possession with intent to distribute a controlled substance, use or possession of drug paraphernalia, possession of marijuana or synthetic cannabinoids – second offense, and trafficking of a controlled substance by manufacturing.

The Magistrate Court preliminary hearing was continued several times by Assistant District Attorney Kent Wahlquist and Public Defender Michael Jones while awaiting possible federal charges. The federal documents accuse Gonzales of maintaining the apartment for the purpose of distribution, storage and use of marijuana and hash oil.

The apartment explosion occurred at about 1:24 a.m. May 9, 2016. Immediately afterward, Gonzales was transported to a hospital in Denver, Colo., for treatment of his injuries and has been free on his own recognizance to allow him to receive medical services. According to Jim Hall, who owns the apartment complex with his son, Marcus, the apartment sustained some $100,000 in damage. He said the explosion had enough force to break the floor joists in the apartment.

Los Alamos Police Department records indicate they believe Gonzales entered the master bathroom at the apartment for the purpose of smoking marijuana using a large glass smoking device. They also allege that while smoking his product, there was butane throughout the residence, which ignited “upon Joseph lighting his product, causing an explosion and fire”.

Many of the items found in the apartment resulted in the Magistrate Court drug charges, including individual packages of marijuana, large amounts of cash, five cell phones, glass smoking devices and grinders, a silver pipe with fittings for a butane bottle on one end and a screen on the other, and a Shatter Vac, which is allegedly used for applying heat and maintaining a safe pressure while manufacturing marijuana wax. A large amount of marijuana in individual containers was allegedly found in Gonzales’s bedroom.

Court records filed by LAPD Det. Joseph Robinson indicate that he arrived at the apartment at around 1:44 a.m. and began taking photos. He noticed a room on the west side of the building that was believed to have been occupied by a child in which the window and frame had been blown out of the wall by the blast and were resting 10 to 15 feet from the building. The right side of a window to the living room also was blown out as well as the window to the master bedroom, and there was damage to the structure pillar outside. Several items had been blown through the window including minor computer equipment and two cell phones.

Robinson observed that the master bathroom door had been blown off and that there was a silver-colored device in the middle of the bathroom and a pot with a heating device attached to the bottom.

“The purpose of these items, from my training and experience, was that this is used in conjunction with marijuana and butane to manufacture marijuana wax,” Robinson’s report said. He also observed a large glass smoking device and a small jar containing a green, leafy substance “consistent with marijuana” which was covered with melted plastic, as well as a green propane torch lighting device resting in front of the toilet. He also found two cases of butane fuel in a closet in the bathroom and an open safe containing several cell phones, a bag of unused hypodermic needles, a large amount of money, and home drug test kits. He also found several heat-sealed bags containing a green leafy substance.

On the dresser in the master bedroom, Robinson said there was an open case with several items of drug paraphernalia including a glass smoking device and a grinder.

“Throughout the apartment, I noticed structural damage to the ceiling as it separated from the walls during the blast,” he said.

Incident/investigation reports were filed by several LAPD officers who responded to the scene including Cpl.  Robert Larsen whose report states that on arrival he found Joseph Gonzales and his brother, Juan Gonzales standing on the sidewalk in front of an apartment. Joseph Gonzales appeared to have sustained a deep cut to his right foot and several burns to his face and body. He told Larsen he had been filling up his refillable lighter in the bathroom when it exploded. After LAFD cleared the apartment they advised police the damage to the building was not caused by an exploding tank and the apartment was declared a crime scene.