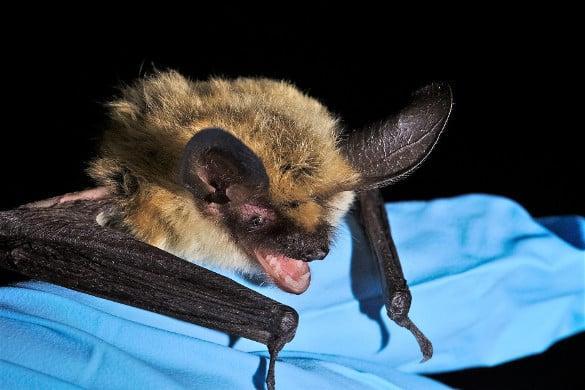 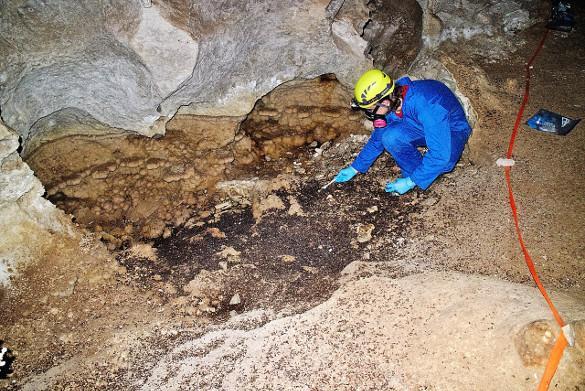 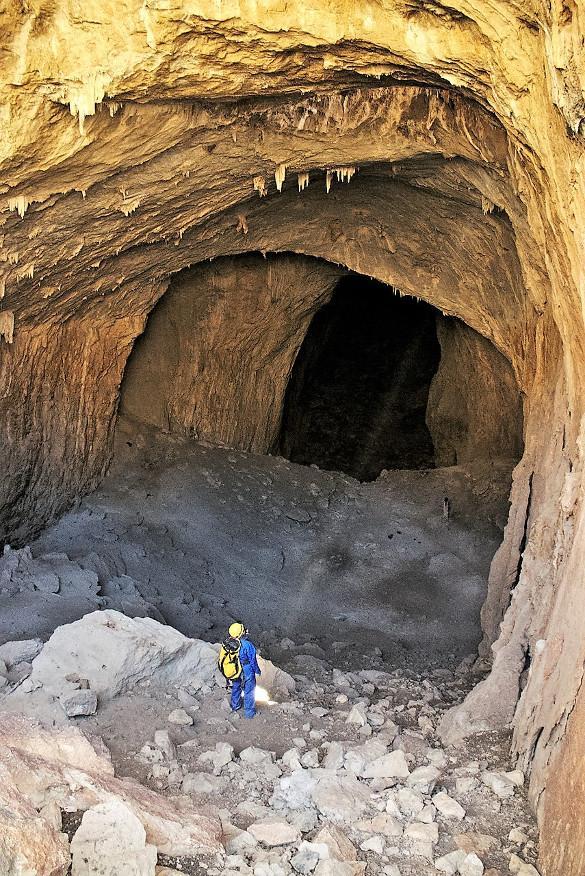 Research leader Diana Northup of the University of New Mexico enters a New Mexico cave in March 2018 to collect samples to test for P. destructans, the fungus that causes white-nose syndrome in bats. Photo by Kenneth Ingham, copyright 2018
STATE News:
Federal agencies that manage popular caves on public lands in New Mexico are taking disease-prevention precautions and restricting entry to some sites to help prevent spreading the fungus that causes the fatal disease in bats known as white-nose syndrome (WNS).
With more than 2,100 natural caves and thousands more abandoned mines in New Mexico, bats are at potential risk of infection if people spread or track microscopic spores of the fungus Pseudogymnoascus destructans (Pd) into or out of caves and mines. Initial tests by an Arizona laboratory of cave soil and bat guano samples gathered by New Mexico researchers this spring in two national parks, a national forest and other federal lands suggested the presence of Pd fungus. However, subsequent confirmation tests completed this week at the U.S. Geological Survey’s National Wildlife Health Center in Wisconsin did not detect any evidence of the fungus.
Nonetheless, recent detections of Pd in Texas and Wyoming and the confirmation of WNS in Oklahoma and South Dakota have prompted federal lands managers in New Mexico to elevate precautions to protect bats in caves and abandoned mines. Among the locations taking additional decontamination or access measures are Carlsbad Caverns National Park and El Malpais National Monument (National Park Service), Fort Stanton Cave in Lincoln County (Bureau of Land Management), and Cottonwood Cave in Lincoln National Forest (USDA Forest Service).
WNS is now confirmed in 33 states and seven Canadian provinces, mainly in the East and Midwest, where the pathogen has killed millions of bats since it was first detected in 2006.
Fungal spores, but not WNS, have been found in three other states. Any new sign of its spread is worrisome because bats are vital for healthy ecosystems. Voracious insect-eaters, bats contribute at least $3 billion annually to the U.S. agricultural economy through pest control.
“As the leading edge of the white-nose syndrome disease front advances, we do not fully know how the fungus will behave in these environments, particularly in the Southwest,” said Dr. Jeremy Coleman, the U.S. Fish and Wildlife Service’s coordinator for the disease. “Given the documented spread in 2018, we encourage land managers to follow national guidance by taking action to limit further spread of the fungus.”
Although bats themselves are the primary way the fungus spreads, possible spread by human activity in caves is a major concern. Neither the fungus nor the disease affects humans or pets, but people can help limit their spread. State and federal agencies in New Mexico and throughout the West ask that outdoors enthusiasts help by following these recommendations:
According to the guidance established under the national WNS response plan, New Mexico is in the “intermediate” category for decontamination protocols because it borders a state (Oklahoma) where WNS has been confirmed. Among such measures is that gear and clothing used while visiting a cave in a place where Pd fungus has been found should not be used or worn in a cave where the Pd status is unknown. (See full range of national decontamination guidance at https://www.whitenosesyndrome.org/topics/decontamination.)
Here are examples of additional precautions planned at four New Mexico locations where field researchers gathered samples for Pd DNA testing:
For more information:
National white-nose syndrome website: https://www.whitenosesyndrome.org/
Map of WNS occurrence by county: https://www.whitenosesyndrome.org/static-page/where-is-wns-now
National Park Service white-nose subject pages, with videos, photos, maps: https://www.nps.gov/subjects/bats/white-nose-syndrome.htm
LOS ALAMOS