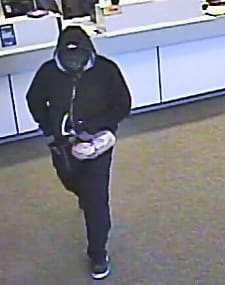 Bank robber at LANB in White Rock. Courtesy/FBI
FBI News:
The FBI has released photos of the man who robbed the Los Alamos National Bank at approximately 11:50 a.m. today at 77 Rover Blvd., in White Rock.
The suspect wore a dark hooded jacket, a dark baseball cap, and his face was covered. He was described as male, approximately 5’10” to 6′ tall, with a thin build.
He displayed a handgun and demanded money from a teller, who handed over an undisclosed amount of money to the suspect. The suspect left the bank. 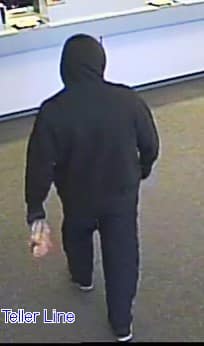 Back of bank robber at LANB in White Rock. Courtesy/FBI
The FBI may pay a reward of up to $1,000 for information leading to the arrest and conviction of the suspect.
Anyone with information about this robbery is asked to call the FBI at 505.889.1300. Tips can also be submitted online at tips.fbi.gov.
Information about other bank robbers wanted by the FBI can be found at bankrobbers.fbi.gov.
Menu
LOS ALAMOS