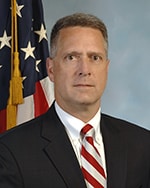 FBI Director Christopher Wray has named James C. Langenberg as special agent in charge of the Albuquerque Field Office. Mr. Langenberg most recently served as the chief of the External Audits and Compliance Section in the Inspection Division at FBI Headquarters (FBIHQ).

Mr. Langenberg entered on duty with the FBI in 1996, and was first assigned to the Albuquerque Field Office, where he investigated white collar crime, counterintelligence, and violent crime and major offender matters. He was a member of the Albuquerque SWAT team, a certified sniper, and served as the Associate Division Counsel.

In 2001, Mr. Langenberg was promoted to supervisory special agent in the Office of Public and Congressional Affairs, FBIHQ, where he served as the FBI’s liaison to the Senate Select Committee on Intelligence, the House Permanent Select Committee on Intelligence, and the Senate Judiciary Committee. In 2002, Mr. Langenberg transferred to the Counterintelligence Division, FBIHQ, and became a charter member of the new Counterespionage Section.