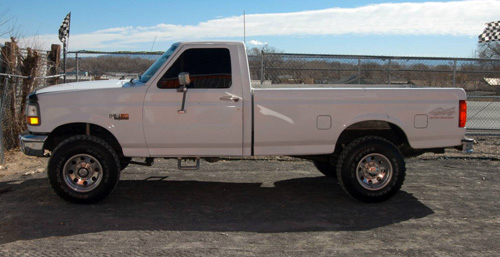 Shooting suspects were last seen leaving the area in a 1990s-model, white, two-door Ford F-250 with tinted windows similar to this one. The vehicle had a single step under each door, chrome rims and body damage on the passenger-side tailgate area. Courtesy/FBI

ALBUQUERQUE—Today marks the 5-year anniversary of when a park ranger was shot near Abiquiu Lake.

Authorities announced at a press conference at FBI Headquarters Friday that they are offering a $55,000 reward for help in cracking the case.

The crime began on the morning of Dec. 1, 2007 when Alfred J. Chavez, a U.S. Army Corps of Engineers park ranger, noticed someone had tampered with a lock and chain on the gate of a Corps-owned pump house near Abiquiu Lake.

As Chavez investigated, two men left the pump house. One of the men pulled out a revolver and fired two shots at Chavez.

One bullet whizzed by his head and the other struck him just above his right knee. Chavez survived the shooting but five years later his wounded leg remains in a brace.

The men who shot him fled and have not been apprehended.

As the fifth anniversary approached Friday, the FBI reminded the public it is offering a $25,000 reward for the arrest and conviction of the individuals involved.

The suspects were described at the time as follows:

Suspect #1 (shooter): White or Hispanic male in his early to mid-20s, approximately five feet six inches tall and weighing about 140 pounds. He had black hair and a very pronounced tattoo of some sort of figure on the side of his neck.

Suspect #2: White or Hispanic male, late teens to early 20s, approximately five feet eight inches tall and weighing about 200 pounds. He had short, light brown hair and a mustache. The suspect had a colored tattoo on at least one forearm.

The suspects were last seen leaving the area in a 1990s-model, white, two-door Ford F-250 with tinted windows. The vehicle had a single step under each door, chrome rims and body damage on the passenger-side tailgate area.