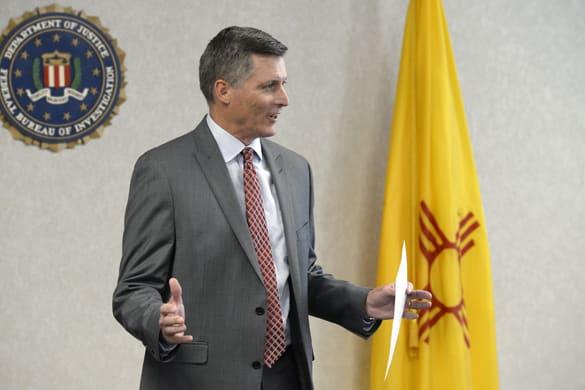 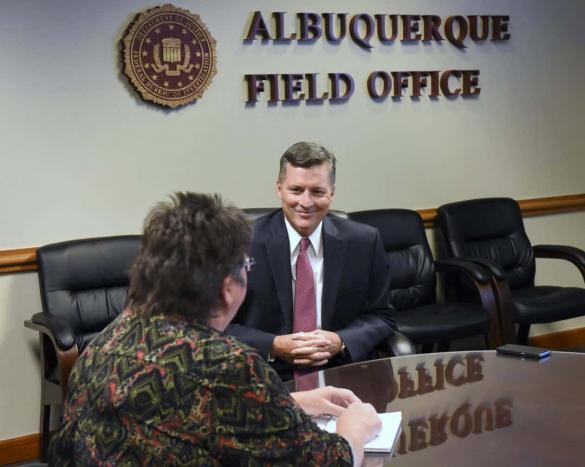 Wade, a native of Chattanooga, Okla., said when he went through Quantico he was a small-town Okie and remembers thinking he would never raise his hand to be sent there.

“And this will be the third time I’ve raised my hand to go back to D.C. I never pictured myself in Los Angeles or Baghdad either. It’s one of the beauties of the Bureau. It takes you on a ride that you can’t plan,” Wade told the Los Alamos Daily Post Tuesday morning as he announced his departure at the end of the month to take over his new position as assistant director for the Inspection Division at the J. Edgar Hoover Building.

Wade was named SAC of the Albuquerque Division in December 2015. He also spent some time in Albuquerque as Assistant Special Agent in Charge in 2007 with responsibility for counterterrorism, counterintelligence, cyber and intelligence programs as well as the crisis management program and the SWAT team.

He began his law enforcement career in Oklahoma where he served as an agent with the Oklahoma State Bureau of Investigation and became an FBI agent in 1996. His first assignment was in Helena, Mont., where he worked violations within the FBI’s jurisdiction with an emphasis on domestic terrorism cases.

Wade then transferred to the Oklahoma City Division where he primarily worked violent crimes, drug and white-collar matters. In 2001, he was promoted to a supervisory position in the Criminal Investigations Division at Headquarters. From there, in 2003, he went to the Flagstaff Resident Agency as supervisory special agent. From December 2008 to April 2009, Wade served as on-scene commander in Baghdad, Iraq. Prior to his most recent assignment in Albuquerque, he was the special agent in charge of the criminal division of the Los Angeles Field Office.

Looking back over his time in Albuquerque, Wade said he is proud of the increased cooperation and the relationships the FBI has with its partners because that is so important.

“I feel we are at a good place. It can always be better. It’s something that we always pay attention to and give constant care and feeding to – making sure that we’re responsive and respectful to all of our partners,” he said.

Asked what resources the FBI brings to Albuquerque amid the current rash of violent crime, Wade said once again it is about being partners.

“We have limited resources. We’re not going to be able to go out and enhance the Albuquerque Police Department or Bernalillo County Sheriff’s Office’s patrol capabilities or anything like that. What we can do is be a force multiplier through our Safe Streets Task Forces, through intelligence-driven targeting of certain areas,” he said.

Wade said New Mexico is a good place in that most of the departments here are not territorial.

“We’re spread thin. We’re a large state geographically and sparsely populated in a lot of areas, so people understand there’s more work than people. Some of those areas depend heavily on the state police and on us to augment them as there is really no other game in town,” he said.

Wade said the southwest border has its own unique challenges.

“Obviously being a border state we’re a corridor state for the trafficking of narcotics. How that directly relates to violent crime here in Albuquerque it’s hard to say specifically,” he said.

Wade said the priority he sees for his successor is to continue focusing on the partnerships making sure that the FBI is adding value to all of their partnerships, ensuring that the Bureau maintains an enhanced level of trust.

In response to a question on how the Division is affected by current issues with the FBI at a national level, Wade said Director Wray has repeated to the workforce a number of times that doing the right things the right way is what they are going to focus on.

“We can’t control public narrative and we should not get drawn into the public narrative. We make sure the work speaks for itself,” he said. “When I talk to our employees there are some that are oblivious to it and there are some that sometimes bring it up to us. We have to make sure we are focused on the right things and not distracted,” he said.

Wade said that in a large organization of more than 36,000 employees, the inspection division has a wide mandate.

“It reviews policy and procedure, ensures compliance with that. It’s also searching for best practices and efficiency, things that we can be doing better. We also have the internal investigations and as far as trust within the organization, and then public trust, people have to have confidence that we are policing ourselves,” he said.

Looking back on his tenure in Albuquerque, Wade said the Division has a really unique area of responsibility with the southwest border, two extremely important national security labs, Indian Country and then just all of the other things we have in New Mexico.

Wade said the Ashlynne Mike case really encapsulated what the Bureau’s mission in New Mexico is about to him. He described the response and cooperation of the various law enforcement agencies involved as “full court press”. He said one of his senior agents later told him that as they were ready to go out and make the arrest in the case, he thought to himself that there was nowhere else he would rather be right then than with those people, doing what they were doing.

“And that kind of speaks to the importance of what the Bureau does and getting to be a part of those type of cases where it matters. I was so proud of the cooperation of law enforcement there,” he said.

Wade said there are a handful of things with the Los Alamos and Sandia National Labs and national security that he can’t go into but that he is extremely proud of the work that’s there.

“The agents, analysts, that work on those cases, sometimes I feel bad for them because people don’t get to see the things that they do. There are things that we really don’t claim stats on that matter to the men and women of New Mexico and the United States. Those are some unsung heroes, those are some things I am real proud of here and really again proud of where we are in our partnerships,” he said.

Wade said the work is ever-present and that the importance of the work can’t be overstated.

“The things the big brains in Los Alamos are responsible for are some of the most important assets for our United States government, the protection of those valuable resources and making sure everyone’s aware of the safeguards,” he said.

In response to a comment that he does not seem to fit the stereotype image of FBI agents with his engaging smile and ready laugh, Wade said, “Maybe you’ve seen more of me because I generally don’t get that”.

Wade noted that he has felt very comfortable with the Division’s Citizens Academy, a nine-week program designed to promote a more informed community by educating community representatives including media about the mission, resources and jurisdiction of the FBI. Wade said the Citizens Academy is always a reaffirmation of the support the FBI has and that it really needs to maintain because without it “we’ll never succeed”.

Asked if he would ever write a book, Wade said he would not.

“It’s not false humility. There’s tons of people that have had more interesting careers than me,” he said.

“I still run, not as fast as I did when I went to the Academy, but I still run. Outside of family things my biggest passion is Oklahoma University football. I’m a huge OU fan, a native Okie. I follow my Sooners and I’m still getting over the Rose Bowl loss, but it’s time to turn the page and get ready for this season,” he said.

Asked to briefly describe what it is like to work for the FBI, Wade said, “Invigorating, challenging, never dull!”