Famine To Feast Makes It Easy To Donate Food 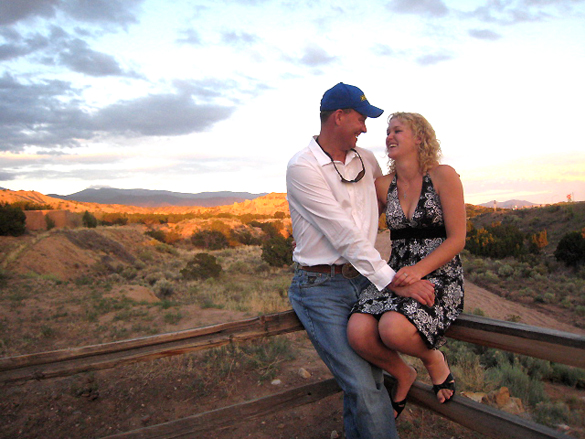 Inspiration struck Jen and Jaret McDonald while on vacation about how they could help others feed the hungry. Courtesy photo
By MANDY MARKSTEINER
Los Alamos

Los Alamos residents Jen and Jaret McDonald’s vacation was winding down when they came up with an idea that could reduce food waste by 1 percent and help people facing hunger.

Inspiration struck when they were cleaning out their vacation rental and realized that they had at least $100 worth of food and other supplies left over.

They didn’t have the space to take it with them and wanted to donate it to a local food shelf, but they didn’t know where to find one. Plus they needed to catch a plane and were strapped for time.

Instead of giving their extra stuff to someone who could use it, they ended up throwing it all away. It’s a shame to see food go to waste so they are developing an app that lets people donate food quickly.

The McDonalds are forming a non-profit called Famine to Feast. The non-profit will create a simple app that uses GPS to connect the dots between people with extra food and those who need it.

The best part? When using the app, just enter the information about what’s being donated and click send – that’s it. Nearby shelters or food banks are notified of the donation and a driver arrives to pick up the food. The food donor pays the driver a small fee and receives a receipt for taxes purposes.

According to the Roadrunner Food Bank of New Mexico, the number of families who need food assistance in New Mexico is growing. The recession, high unemployment, underemployment, and low job wages contribute to the problem. Even though the New Mexico Foodbank distributed 30 million pounds of food last year, they say it wasn’t enough. Food shelves across the country face similar problems.

Even though hunger seems like an overwhelming problem, the McDonalds recognize a straight forward solution. Forty percent of the food produced in the United States is thrown away, uneaten. That’s $165 billion worth of wasted food. Their goal is to make the Famine to Feast app so popular and simple to use that people across the country develop the habit of donating unused food, instead of throwing it away. Since people will be able to donate with the push of a button, it will be an easy habit to pick up.

Famine to Feast can be used in any situation where there are “extras”. When a family goes on vacation, they often end up with extra food, but they don’t have the time to donate it. Food banks and shelters also accept donations of paper products, baby items and hygiene products.

The McDonalds are raising funds to develop the app and market the Famine to Feast concept. Visit www.faminetofeastnow.com to donate.