‘Faces of Lannan’ Coming to Library 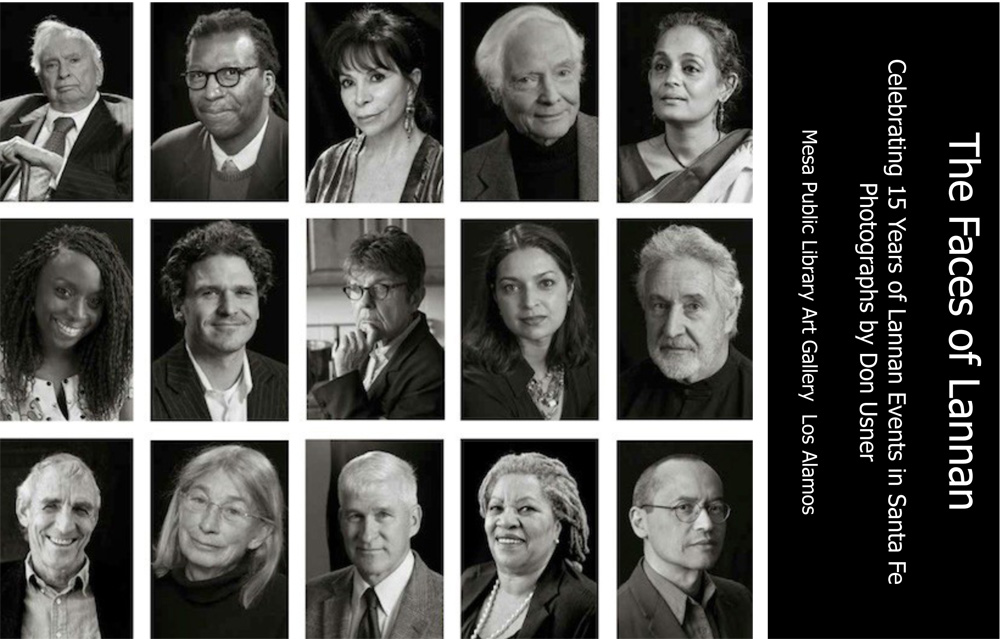 Mesa Public Library Art Gallery presents seventy remarkable photographic portraits by Don Usner of participants in the Lannan Foundation’s Readings and Conversations literary series of the last 15 years. All the portraits are black and white and eloquently reveal the personality of each author.

The Library is honored to present this exhibition along with a selection of books by each author and digital access in the gallery to podcasts and video casts of the events on the Lannan Foundation website, www.lannan.org.

The exhibition is made possible with support from the Lannan Foundation and the Friends of Los Alamos County Libraries.

According to the Lannan website, “the Foundation is particularly interested in projects that encourage freedom of inquiry, imagination, and expression,” an aim so closely allied with that of libraries.”

The exhibition will open to the public on Friday, Nov. 8 with an artist reception from 4-5:30 p.m. Thursday, Nov. 21 At 7 p.m. the same evening, Don Usner will be guest

speaker for the monthly Authors Speak event. Both an author and photographer, he will discuss his experience meeting and photographing the Lannan authors as well as his own books.

From Toni Morrison to Gore Vidal, Lawrence Ferlinghetti to Amy Goodman, and Susan Sontag to Robert Creeley and Cornel West, Usner’s subjects include many of the 20th century’s most celebrated thinkers.

Usner was born in Embudo, near Taos in 1957 and spent his youth in Los Alamos and Chimayó. His family has a long history in the Rio Grande Valley and its landscape and history have been a significant inspiration in his photography.

Usner’s work has been presented in several exhibitions and publications, including Sabino’s Map: Life in Chimayó’s Old Plaza and Route 66 On Tour: Legendary Architecture from Glenrio to Gallup.

His other publications include, with William de Buys, Valles Caldera: A Vision for New Mexico’s National Preserve, and a collection of folk tales told by his grandmother, Benigna’s Chimayó, Cuentos from the Old Plaza.

Usner has served as Lannan Foundation’s official photographer since 1997. Learn more about Usner’s work at  http://www.donusner.com/.

The Lannan Foundation is a family foundation dedicated to cultural freedom, diversity and creativity through projects which support exceptional contemporary artists and writers, as well as inspired Native activists in rural indigenous communities.

The Foundation recognizes the profound and often unquantifiable value of the creative process and is willing to take risks and make substantial investments in ambitious and experimental thinking. Understanding that globalization threatens all cultures and ecosystems, the Foundation is particularly interested in projects that encourage freedom of inquiry, imagination, and expression.

The Foundation supports this mission by making grants to nonprofit organizations in the areas of contempary visiual art, literatire, indigenous communities and cultural freedon.

The Foundation also gives awards and fellowships to writers and in the area of cultural freedom. Awards recognize individuals for extraordinary work in their fields. Fellowships provide time and support to continue with or to complete specific projects and also recognize those who show potential for future outstanding work.

The most visible of these programs is the very popular Readings & Conversations series which brings nationally and internationally recognized poets and writers to Santa Fe to read and discuss their work in a public setting. In 2011, Lannan added a new series called In Pursuit of Cultural Freedom, a lecture series featuring philosophers, writers, scholars, and social justice activists discussing political, economic, environmental, and human rights issues.

Authors Speak is a monthly event primarily featuring New Mexican authors speaking about their writing on a variety of subjects such as local and state history, travel, outdoor activities, New Mexico fiction, history and culture, poetry and more.

The talks are free, so come by and relax, listen to and meet each one in the fascinating lineup of authors. Most of the talks are scheduled for the fourth Thursday of each month at 7 p.m., and are usually held in the Upstairs Rotunda of Mesa Public Library.

Mesa Public Library has a large, beautiful, light filled gallery space on the third floor. The gallery is available free of charge for exhibitions by individual artists, groups of artists, regional cultural organizations, and traveling museum shows. The gallery fosters collaboration and cooperation among many community organizations including other local museums, Los Alamos schools, and universities statewide. As the only general purpose exhibition space in Los Alamos, the Library, in keeping with its general mission, offers a broad range from 3D photographs of caves to Santa Fe Opera costumes and props; cutting edge contemporary art  installations to quilts by local craftspeople.