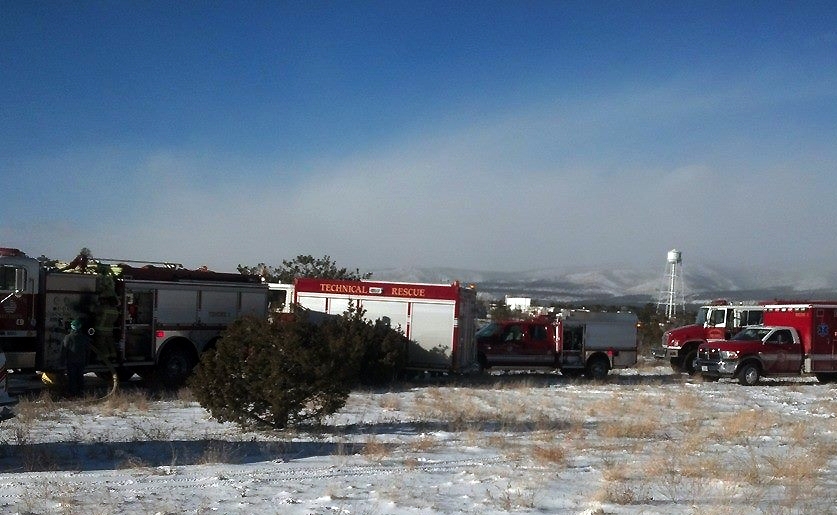 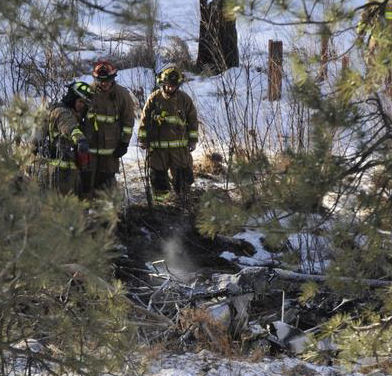 UPDATE: The County just released a statement saying The Office of the Medical Investigator (OMI) has completed its investigation at the site of the single engine plane crash that occurred at approximately 8:10 a.m. today on Canyon Rim Trail just south of the Los Alamos Airport. The OMI findings have not yet been released.

Driving east past the airport heading for coffee at the Los Alamos Cooperative Market, a Los Alamos woman witnessed an inbound plane disappear from the sky this morning.

“It was about 8 a.m. and I saw snow whirling down near the far end of the airport and then a little plane coming out of that whirling snow,” Patty Wills told the Los Alamos Daily Post. “It was about halfway down the runway when it pulled up and banked toward me, making a U-turn like it was heading for Santa Fe. I looked up in the sky for the plane but couldn’t see it.”

Wills recalled entering the Co+op to buy her coffee and seeing smoke when she came back out.

“There was a humongous ball of black smoke … really big … really black,” she said. “I thought, ‘Oh God the plane’ and called 911. I got in my car and drove past where I saw the smoke and the fire emergency vehicles where already getting there … it’s kind of frightening.”

Wills drove on to her job at the Pajarito Brewpub & Grill in Los Alamos.

Firefighters from the Los Alamos Fire Department responded to the scene and Deputy Fire Chief Justin Grider confirmed this morning that the plane had crashed into Los Alamos Canyon.

“There are an unknown number of victims on the plane,” Grider said during an interview earlier today, adding that the crash site has been sealed off.

No information is available for release yet about the number of passengers, pilot of the plane, tail number or make of the plane, she said.

A fire at the scene of the crash has been extinguished, Habiger said, and crews are preserving the scene for the FAA investigation, which is now pending.

“The Office of the Medical Investigator (OMI) is on scene,” Habiger said. “We do NOT have confirmation of any deaths at this time.”

She said information on any deaths will come from the OMI, which is closed today.

“The public and media are asked to stay clear of the crash site and Canyon Rim Trail parking lot along N.M. 502 to allow fire and police responders to complete their work,” Habiger said.

The Los Alamos Daily Post will continue to report information on this plane crash as it becomes available.