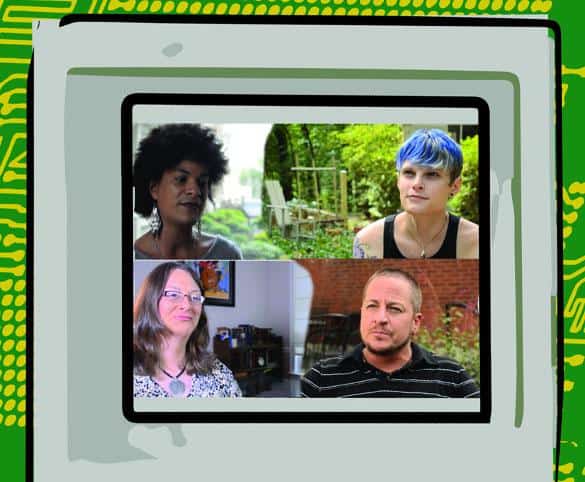 Courtesy photo
COMMUNITY News:
One Los Alamos and FLAP/Friends of Los Alamos Pride present Movie Night: TransGeek 6-8 p.m., Friday, Jan. 25 in the Building 2 Lecture Hall at UNM-LA, 4000 University Dr.
The documentary explores the intersection of gender identity and geek culture, and will be followed by a Q&A with producer/director Kevin McCarthy and a panel from the local trans/tech community.
McCarthy, director and co-producer of TransGeek, answered a few questions in a recent interview.
“I am very much looking forward to visiting Los Alamos, and to the screening Friday night. I think the Los Alamos audience is a natural fit for our film,” he said. “Usually I would want to bring my co-producers, Sayer Johnson and Mallory Wood, in on these questions. I think it is important to center trans voices whenever possible. But given the short time frame, I will answer the questions for you.”
The production team also includes co-producers Sayer Johnson, a trans activist working in St. Louis, and Mallory Anna Wood, a trans, lesbian, feminist activist, writer and gamer.
Q: Why does it matter to you “to bring a better understanding of the role gender identity plays in our culture to a wide audience through your work,” as you say on your website?
“The stories of trans folks are all too often told by the cisgender, heteronormative, media for a similar audience. Again and again trans lives are forced to conform to stereotypes that are not true to their experience. When trans people tell their own authentic stories, it is empowering not only to the trans community, but helps the wider audience to understand that trans lives are lived day-to-day, and cannot be reduced to ‘transition stories,’ or tragic/comic tropes.”
Q: What would you say to people who don’t know anything about the trans/information technology (IT) professional connection to explain it?
“There is a strong affinity towards geek culture for a large number of trans folks. Science fiction, fandom, and gaming, at their best, provide a unique and welcoming environment where people can explore and express their gender identity. These are also some of the few areas of popular culture where trans people can see depictions of themselves, even if is only through allegory.”
“The tech community has a complicated history when it comes to LGBTQ people—as it does with women, people of color, and those living with disabilities. Tech prides itself on promoting a culture of meritocracy. In reality, it is dominated by affluent white men. The successes and failures of tech’s aspiration to meritocracy have real impacts on the lives of trans folks, and the future of the industry. It is only through honestly hearing the stories of capable, talented people that don’t fit the dominant picture of a techie, that both they and their employers and colleges can truly flourish.”
Q: Why would this movie appeal to non-trans folks?
“Everyone knows trans folks, even if they are not aware of it. The stories that are told in TransGeek are fascinating and will resonate with anyone curious about tech, gaming, science fiction, and history. The general appeal of these stories lies in the realization that the lives of trans folks are every bit as full and complex and yours. There is no ‘trans narrative’ that encompasses the fullness of any person’s authentically lived life.”
Q: What did you learn as a cisgender man working with trans folks that could help others who may be new to understanding transgender issues?
“The first thing I learned, (and am still learning), was to shut up and listen. When we enter a new situation, it is so easy to miss the truth of it because we bring our own preconceptions and biases. It is only when we listen to others, let their stories unfold, and ask thoughtful questions that come from a place of love and curiosity, that we can begin to see other truths.”
Q: Anything else you want to add to encourage attendance?
“This is a film for geeks. This is a film for the LGBTQ community and their allies. This is film that celebrates authenticity. This is a film about amazing people. Who wouldn’t want to see it?”
The showing is free, but donations to support the film will be accepted at the door. Other sponsors include LAPS Healthy Schools Initiative, LAHS Genders and Sexualities Alliance (GSA), Prism/LANL’s LGBTQ Group, Unitarian Church of Los Alamos and UNM-LA. This event is part of Diversity Week, which celebrates the community’s diversity with a series of art and cultural events.
Menu
Los Alamos
59°
Mostly Cloudy
6:31am7:38pm MDT
Feels like: 57°F
Wind: 12mph SE
Humidity: 28%
Pressure: 29.7"Hg
UV index: 0
ThuFriSat
63/37°F
55/30°F
50/32°F
Weather forecast Los Alamos, New Mexico ▸