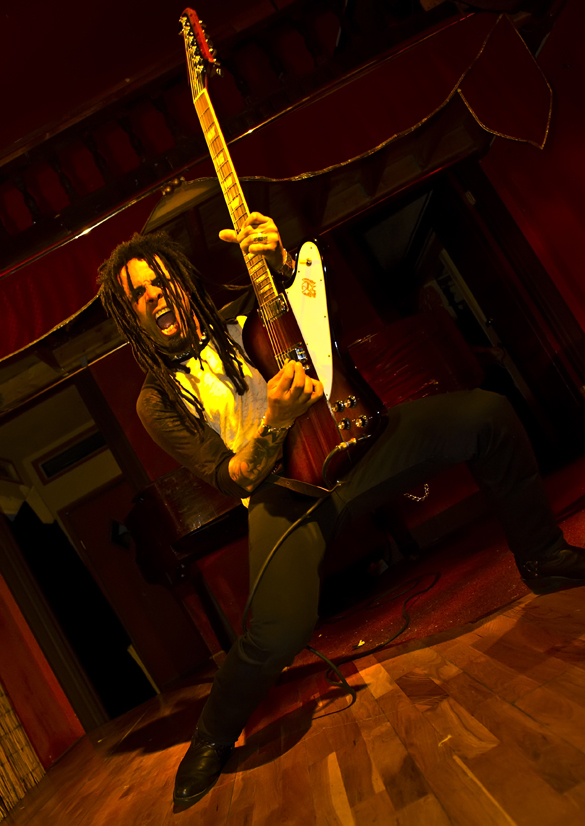 At 7 p.m. tonight at Ashley Pond, we’re going to be rocking. Not some mindless pop or even some great folk rock. No country Friday or country rock. Not even 50s or 60s rock.

The root of this music is the harder rock of the 70s, the punk and metal of the 80s and the grunge of Seattle’s 9’s. Playing tonight is the awe inspiring, raging rocker and guitar virtuoso Eric McFadden, with drummer Scott Beguin and bassExpectist Walden Cox.

He’s collaborated on stage and/or the studio with Bo Diddley, Keb Mo’, Living Colour, Ron Wood, Joe Strummer (the Clash’s late singer who nicknamed Eric, “Lightning” because of his miraculous speed on the guitar), Les Claypool, Bonnie Raitt, Bill Kreutzman, Pink, Widespread Panic, Jackson Browne, The Reverend Horton Heat, Grace Potter, Galactic, Jack Johnson, Stewart Copeland and many others. He is the classic session guitarist but we have him doing his own stratospheric thing Friday.

McFadden grew up in a musical family in New York City. His mother sang in one of my favorite 60s band, a punk band before there was such a genre, the Fugs. Bob Dylan crashed at their apartment and Beat poet Allen Ginsburg was a political activist friend.

His father turned him onto acts like Jimi Hendrix and the Mahavishnu Orchestra. You’ll hear their influence on Friday plus acts like the Talking Heads, Nine Inch Nails, Metallica, Tom Waits, Morphine, Gov’t Mule, Nick Cave and even some Mozart and other classical sounds.

“Lightning” moved to Albuquerque as a boy. He’s known drummer Beguin since they were young aspiring professionals in Albuquerque. Beguin grew up in Los Alamos and still lives in town. He’s one of the best drummers in New Mexico and can be most often heard with DK & the Affordables.

Bassist Walden also grew up in Los Alamos but now lives in Colorado where he and Beguin have big plans for their band, Ghost Like This. Walden lived in San Francisco for years, but recently moved to Los Angeles to keep growing in the music business.

Read more about Eric McFadden at www.ericmcfadden.com and about the Los Alamos County Summer Concert Series at www.gordonssummerconcerts.com.

Friday, July 18 we help with the grand opening week of the new Smith’s Marketplace. You can tell this is a small town when one of the biggest news stories in years is the opening of a new market, but I’ve checked it out and this place is unique and the only such store in New Mexico.

Also unique is the show we have scheduled. The fans of Raul Midon are incredibly excited. This will be a happening, an incredible event. As it said in the New York Times he’s “a one man band who turns a guitar into an orchestra and his voice into a chorus.”

I’ll write more about Midon l next week. Opening for Raul Midon will Santa Fe blues-rock band, the Tiho Dimitrov Band. Read about and listen to Raul Midon at www.raulmidon.com and Tiho Dimitrov at www.tihodimitrov.com.