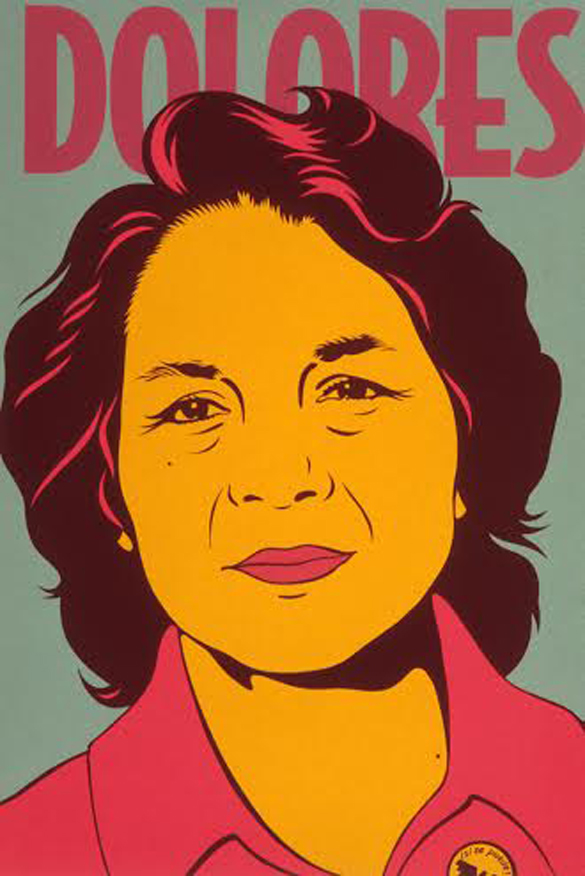 ‘Dolores Huerta’ by Barbara Carrasco, Silkscreen, 1999, National Portrait Gallery, Smithsonian Institution, ©1999 Barbara Carrasco
SMITHSONIAN News:
The story of the modern agricultural workers’ movement in the United States is deeply intertwined with that of Dolores Huerta, a Latina leader who worked tirelessly on behalf of farm workers.
The Smithsonian’s National Portrait Gallery will highlight her significant role in this movement of the 1960s and 1970s through the exhibition “One Life: Dolores Huerta,” July 3-May 15, 2016.
This 11th installment in the Portrait Gallery’s “One Life” series is the first devoted to a Latina. It will illuminate Huerta as the co-founder, with Cesar Chavez, of the United Farm Workers (UFW) and her position as the union’s lobbyist and contract negotiator. She was instrumental in achieving major legal protections and a better standard of living for farm workers. The exhibition will coincide with the 50th anniversary of the September 1965 Delano grape strike launched by the farm workers’ movement.
“I am proud that the National Portrait Gallery will recognize the invaluable contributions to the history of this nation made by Dolores Huerta,” said Kim Sajet, director of the museum. “The exhibition will be a visual study of Huerta’s commitment to the multicultural, nonviolent farm workers’ movement, her motivations and her organizing methods.”
Huerta’s confrontational style at the table negotiating contracts and her sincere commitment to social justice earned her the name La pasionaria, or “the passionate one.” At a time when organized labor was dominated by males, and Mexican American women were expected to dedicate themselves to family, Huerta advanced new models of womanhood, all while rearing 11 children. Huerta’s work for the union was far-reaching, encompassing the farm field, the picket line, the legislature and the bargaining table.
Huerta is the second living figure in the “One Life” series. In 1998, President Bill Clinton awarded her with the Eleanor Roosevelt Award for Human Rights. In 2012, President Barack Obama presented her with the Presidential Medal of Freedom.
Curated by Taína Caragol, the museum’s curator of Latino art and history, “One Life: Dolores Huerta” will feature more than 40 objects, including documentary photographs, original speeches presented by her to Congress, UFW ephemera and Chicano artworks.
“One Life: Dolores Huerta” is made possible by the Friends of the National Museum of the American Latino; through federal support from the Latino Initiatives Pool, administered by the Smithsonian Latino Center; and by the Guenther and Siewchin Sommer Endowment Fund.
The National Portrait Gallery’s “One Life” room has focused on the lives and influence of Katharine Graham, Martin Luther King Jr., President Abraham Lincoln, Sandra Day O’Connor, Thomas Paine, Elvis Presley, President Ronald Reagan and U.S. generals Ulysses S. Grant and Robert E. Lee.
National Portrait Gallery
The Smithsonian’s National Portrait Gallery tells the history of America through the individuals who have shaped its culture. Through the visual arts, performing arts and new media, the Portrait Gallery portrays poets and presidents, visionaries and villains, actors and activists whose lives tell the American story. The National Portrait Gallery is part of the Donald W. Reynolds Center for American Art and Portraiture at Eighth and F streets N.W., Washington, D.C.
Smithsonian Information: (202).633.1000.
Website: npg.si.edu. Follow the museum on social media at @NPG, Facebook, YouTube, Instagram and Tumblr.
Menu
Los Alamos
54°
Fair
6:53am4:52pm MST
Feels like: 54°F
Wind: 5mph E
Humidity: 21%
Pressure: 30.2"Hg
UV index: 3
SunMonTue
54/34°F
57/34°F
55/34°F
Weather forecast Los Alamos, New Mexico ▸