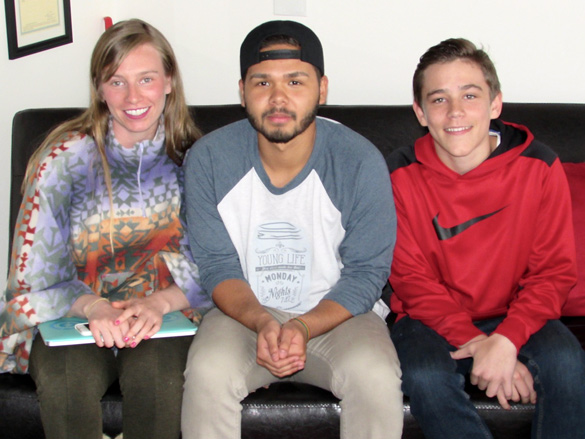 The family of Carlos Lopez, center, a foreign exchange student from Portoviejo, Ecuador, is struggling in the aftermath of the 7.8 earthquake that hit Ecuador April 16. In response, members of Lopez’s host family, Nicole and David Murphy, have established a GoFundMe account to help support the Lopez family. Photo by Kirsten Laskey/ladailypost.com 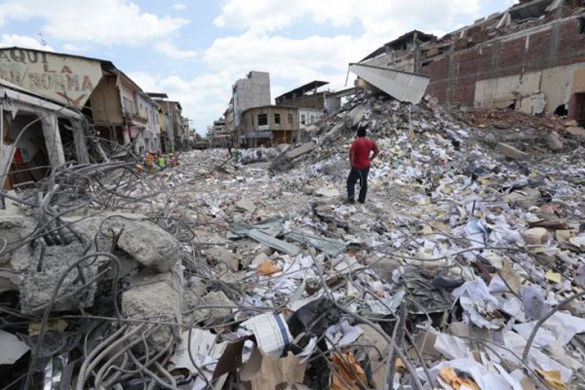 News of Ecuador’s 7.8 earthquake April 16 caused Carlos Lopez, 18, an exchange student from Portoviejo in Ecuador’s Manbi Province, to scramble to communicate with his family.

Lopez, who is attending St. Michael’s High School in Santa Fe, said he attempted to call his parents but the line went down. He was eventually able to connect with his mother and father who assured him his immediate family was alright and his house was not destroyed but it was a different story for the rest of the town.

“I know people who lost everything,” Lopez said.

In a telephone interview with the Los Alamos Daily Post, Lopez’s sister Samia commented that help has poured in; donations of water, nonperishable food and clothes have been delivered. Several countries including Columbia and Mexico have sent rescue workers to help find people trapped under buildings, she said.

The city’s center is all but destroyed. The economy has vanished along with jobs. In addition, there are many unstable buildings in the city. Samia also acted as a translator for her father, who said, that “things are hard for us – in the case of the economy and work.”

Samia added, there are “a lot of people who have no job at all.” Homelessness has shot up. When asked about looting after the earthquake, Samia said, “At first it was crazy.” People were breaking into stores and houses, she said.

When the earthquake struck, the family initially laughed it off; small, minor earthquakes happen frequently, Samia said. Suddenly, the movement became so intense the Lopez family was bumping into each other. “We were so scared,” Samia said.

Glass could be heard breaking. In the city center, where Lopez’s uncle lived, the building next to his uncle’s had collapsed. Samia said he ran barefoot outside and raced across shattered glass and debris to a bicycle to look for his family. Since it was night and dust and smoke filled the air, Samia said he couldn’t see far ahead.

One of the problems now is what to do with the shattered economy. Lopez’s father said the Ecuadorian government makes a lot of promises but haven’t done anything so far. He mentioned a two percent tax raise was instituted to pay for recovery but it will take time to see any difference.

Locally, Lopez’s foreign exchange family is taking action to assist Lopez and his family. Siblings Nicole and David Murphy established a GoFundMe account, www.gofundme.com/miraclematerial. The goal is to raise $5,000. So far, $910 has been raised.

Upon hearing about Carlos’ family’s situation, Nicole said, “This is hardcore; where do you even begin?” Helping Lopez out, she added, was a no-brainer. “He’s like our brother basically.”

David added, “We just want to do as much as we can for Carlos and his family.”

Lopez has lived with the Murphys for eight months through the Program of Academic Exchange or PAX. He will return home in five weeks. Living abroad was hard at the start, he said. However, Lopez has learned a new language, which he said was the goal. “It was a really good experience,” he said. Still, he really misses home.

Lopez also is grateful for the support he and his family have received in New Mexico. “It’s cool,” he said. “They support me a lot.”