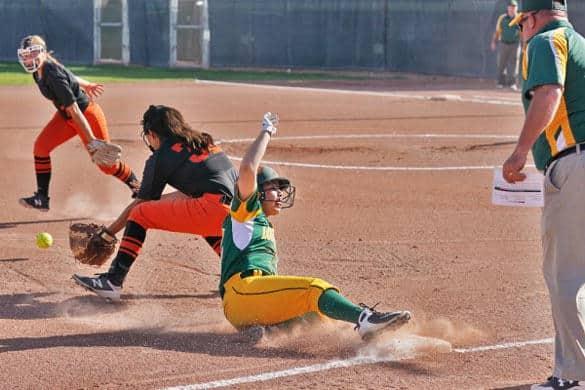 Alicia Gonzales slides into third base well ahead of the throw in the first inning. Photo by John McHale/ladailypost.com
By RJ MONTAÑO
Los Alamos Daily Post
rjmontano@ladailypost.com
Rio Rancho – It was the type of start you dream of while chasing a championship: timely hitting, flawless fielding, and a flustered and frustrated opposing pitcher. The Los Alamos Hilltopper softball team jumped out to a quick 5-0 lead after two innings against the Aztec Tigers, and were cruising in the play-in portion of the 2018 New Mexico Activities Association state tournament.
Enter the third inning, and the start of the nightmare finish. Tiger pitcher Avery Adair found her groove by striking out the side in the top half of the inning.
In the bottom half, Aztec picked up two singles, but a hit batter and four Hilltopper errors would allow the Tigers to claw their way back into the game.
With the frustrations of the last half inning looming over the Hilltoppers, and Adair gaining confidence with every pitch, Los Alamos did not find much success at plate in the fourth inning.
The same could not be said for Aztec. Three hits, Aztec’s Autumn Peterson getting hit by a pitch for the third time in the game, and another Hilltopper throwing error gave the Tigers an 8-5 lead after four innings.
Los Alamos started the fifth inning strong when Jordan Jaramillo hit a single to get on first base. Claire Bluhm then crushed a pitch to the left side that bounced off the third base bag and careened all the way to the fence in foul territory, scoring Jaramillo from first while Bluhm stood at second base with a stand up double. Then, in one of the more controversial calls of the season, the home plate umpire ruled that the ball was foul and the play didn’t happen. After meeting with the rest of the umpiring crew, it was obvious that none of the three umpires were paying attention to the play and the foul call stood.
The terrible call took the wind out of the Hilltopper sails, and the next three batters hit into uninspiring outs.
Aztec picked up another run in the fifth for a triple and three fly outs, earning a 9-5 lead.
After limiting the Tigers to one run after a leadoff triple, the Hilltoppers came to the plate with a little energy. Alicia Gonzales flew out to deep center field when Tiger Juliana Mitchell robbed a hit with a leaping grab.
Hilltopper Janessa Gonzales hit a grounder to third base that again hit the bag before being picked up and thrown to first base late. The home plate umpire, seemingly not knowing the rules for softball, ruled that the ball was foul and sent Janessa Gonzales back to the batter’s box. The Los Alamos fan base was not pleased with the two blatantly bad calls and let the official know it. The umpire refused to comment on the play or even reveal his name in a post-game interview.
Janessa Gonzales ended up popping up to the third baseman and Aztec got out of the inning.
After the two bad calls Los Alamos was out of sync, allowing seven hits and picking up another four errors to give Aztec the insurmountable 14-5 lead after six innings.
The Hilltoppers picked up a pair of runs in the top half of the seventh to close the gap to the 14-7 final score.
Eight of the 14 Aztec runs came off errors, something head coach Randy Burditt talked about after the game.
“[Los Alamos] came out hitting like we wanted them to, they got up when we needed it, but the throwing errors opened the door for [Aztec},” Burditt said.
When asked if he’d ever seen anything like the two calls from the home plate umpire that took the momentum away from his team, Burditt was obviously still disappointed. “I have to be politically correct, but I think that broke our back,” Burditt was able to say adding that he can’t comment specifically on officiating.
“I’m very proud of our seniors, and each year we’re getting better,” Burditt praised of his team. “We finished 18-9 and were competitive for much of the playoff game.”
Los Alamos finished the season with an 18-9 record, winning 13 of their last 15 games.
Menu
LOS ALAMOS