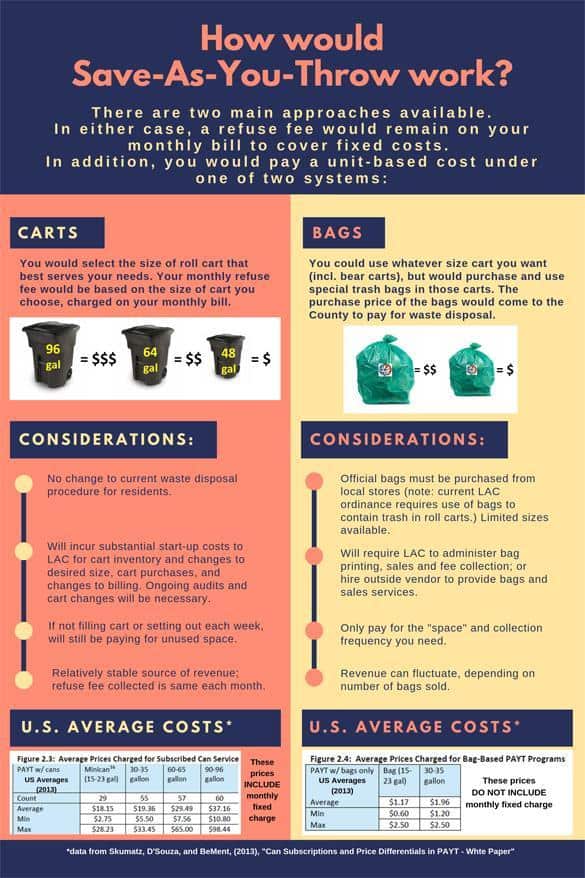 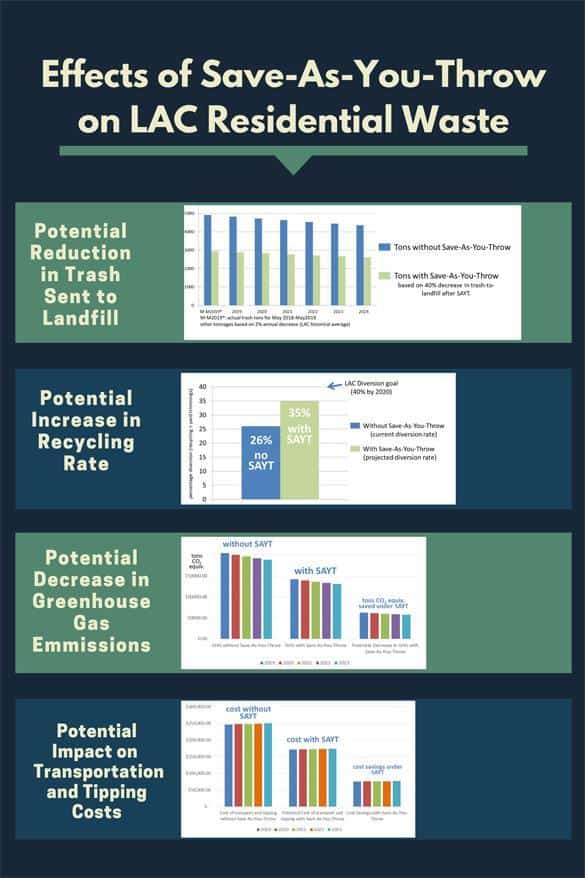 Every year the cost to collect and transport trash in Los Alamos County to the landfill rises, and the annual price tag is already pretty hefty. As the cost rises so does the amount of waste filling up the landfill.

The Environmental Sustainability Board’s (ESB) Save-As-You-Throw (SAYT) Research Subcommittee is considering new options that could not only reduce the amount of waste trucked to the landfill but also allow for more equity and control over residents’ trash collection fees.

The SAYT proposal will be discussed at the Open House  at 5:30 p.m. Thursday in Council Chambers. Refreshments will be served. Participants will have the chance to learn about the different options being considered to reform the trash collection system and give their feedback on them.

The first option, she said, is to keep the existing system. In the current waste collection system, Gurule said, all residents pay the same fee, regardless of how much they throw away. The fee increases every few years to cover the continuously rising cost to collect, transport and dump waste.

The next two options are similar to the collection system implemented for businesses, which are charged based on how much trash they throw away, ESB member Susan Barns said.

She added the other option is for residents to purchase special trash bags to place in their roll carts. They would put trash in those bags and be charged per filled bag.

People pay per gallon of milk, water, and gas, and they pay per kilowatt-hour of electricity, Gurule said; “That same concept that would be applied to  to trash.”

Gurule said regardless of the option, residents’ bills would all include a flat refuse fee to cover the collection system’s fixed costs such as the annual 12 loads to the Eco Station along with the Eco Station amenities (electronic, metal, oil and antifreeze recycling, yard trimming collection, recycle collection, etc).

Right now, Barns said all users pay the same fee for refuse services, which for residents is $25.

“It doesn’t have to be that way,” Barns said.

She pointed out that more than 7,000 communities across the country have implemented a tiered rate structure.

A tiered rate structure in Los Alamos could help residents save money and benefit the environment, Barns said.

“People pay more attention to how much they throw away when they have to pay,” she said.

Gurule agreed, saying, “If we (the County) can reduce our costs, it’s a cost savings for the residents. Everyone wins.”

While it isn’t known just how much the County or its residents could save if one of the tiered systems was implemented, Gurule said, “We do know in other communities that have implemented this that they have seen up to a 50 percent reduction in waste.”

Reducing waste is something people in the community have expressed an interest in, Barns said. She pointed out that during different events attended by ESB members-, people said they work to reduce their waste but question why they are charged the same fee as those who fill their trash cans.

“This is one way to respond to that,” Barns said.

She added that Los Alamos has more than an 80 percent participation rate in recycling.

“There are many people interested in diverting waste … and we love that and this is one way for us to recognize this value,” Barns said.

Gurule and Barns emphasized they want to hear from the public. If people can’t make the open house Thursday, they are encouraged to email the ESB at ESB@lacnm.us, or visit www.losalamosnm.us/gogreen.

Barns said a survey is expected to be posted on the Open Forum page on the County’s website in late July.

“We really want to engage the public and we’re doing our best to do that, we want them  them to make an informed decision,” Gurule said.

There will be other events where the public can learn about SAYT, too. According to the SAYT Calendar, the subcommittee will attend Science Fest July 13 at Ashley Pond Park and there will be a presentation made to the ESB during its meeting at 5:30 p.m. July 18 in the Municipal Building. The topic also will be discussed at EBS meetings Aug. 15, Sept. 15 and Oct. 15, before the final recommendation is brought to County Council in November. 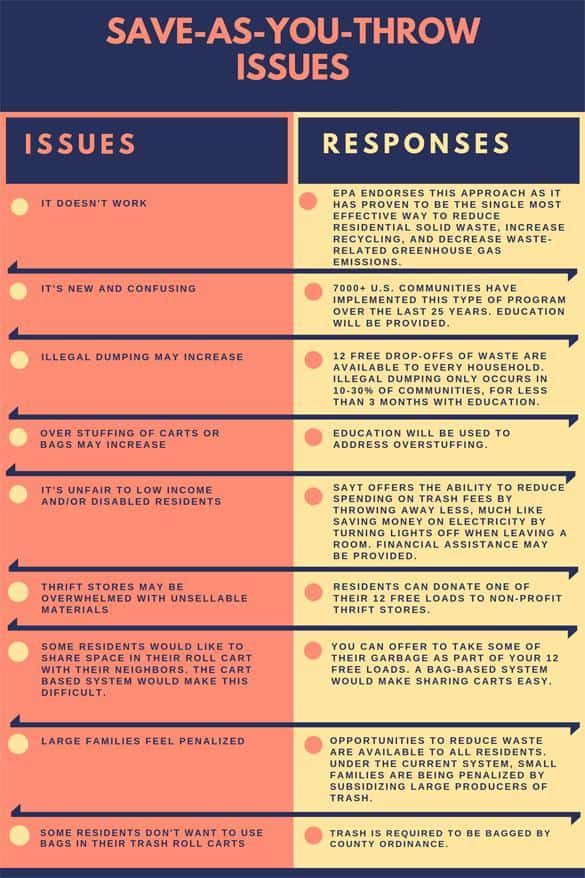 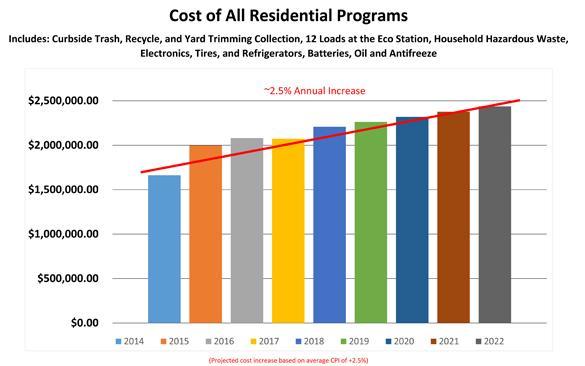