Environmental Sustainability Board Fails To Agree On Plastic Bag Recommendation 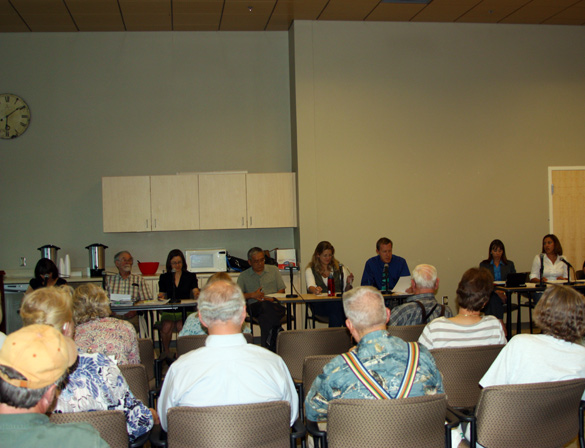 More than 30 people turned out for a public meeting of the Los Alamos County Environmental Sustainability Board Thursday night at the White Rock Fire Station on the subject of imposing a fee on single use shopping bags. Photo by Bonnie J. Gordon/ladailypost.com

It was a long road to nowhere for the Los Alamos County Environmental Sustainability Board Thursday night.

The Board was unable to reach a decision on what recommendation to give the County Council on the imposition of a fee for the use of disposable plastic and paper bags in the County. After three hours and four failed motions, the Board gave up on resolving the issue. This was the second public meeting on the bag issue.

The Board listened to two presentation, one in favor and one opposed to instituting a fee for use of single-use plastic bags. 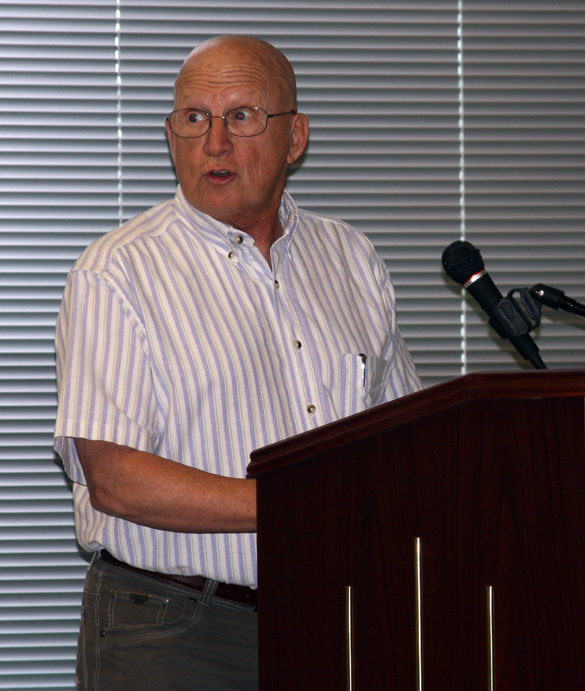 Mark Jones speaks in favor of the imposition of a fee on single-use bags. Photo by Bonnie J. Gordon/ladailypost.com

Mark Jones of the Sierra Club spoke in favor of the imposition of a fee. Jones went over the history of the issue.

“On Nov. 20 last year, this board voted unanimously to support a ban on single use plastic shopping bags,” Jones said. “Rather than sending the motion directly to the Council, however, the Board tasked the Sierra Club and League of Women Voters to gather public opinion through a petition and bring the bring the request to Council, which we did.”

The Council tasked the Environmental Sustainability Board with holding two public meetings on the issue and return to the Council with options and/or a proposed ordinance, Jones said.

The Sierra Club and the League of Women voters decided to pursue a fee rather than an outright ban, Jones said. The groups recommend a 10 cent fee, he said. The fee would be collected and kept by merchants.

Jones said there has been success with similar initiatives in a number of communities. Reduction of litter and support of environmental stewardship were two positive outcomes Jones pointed to.

“A fee on bags is a small, but useful step we can take,” Jones said.

Jones pointed to the number of people who bring reusable bags to the grocery store as proof that there is significant support for imposition of a fee on single-use bags. 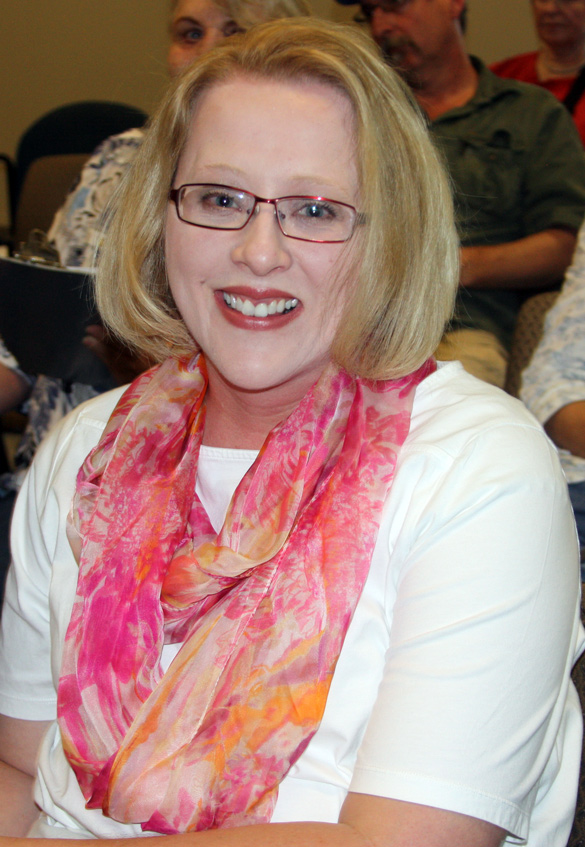 Joyce Anderson spoke in opposition to a fee on single-use bags. Photo by Bonnie J. Gordon/ladailypost.com

“It’s not selfish to want to make your own consumer and lifestyle decisions,” Anderson said. She also said the imposition of a fee interferes with the right of business owners to decide what to provide to their customers. Anderson said a fee on bags would make Los Alamos appear unfriendly to businesses.

She also questioned the legality of a tax on single-use bags and there is a chance the County could be sued over the imposition of a fee on bags. “When money is collected by a government agency, it must be voted on by the population,” Anderson said. She pointed out that an election would cost the County upwards of $30,000. The anti-donation law could preclude giving the collected fee to merchants, she said.

Machen surveyed the two Smith’s stores which are the major distributor of single-use bags. Smith’s Marketplace claimed to use about 36,000 bags per month. Paradoxically, the smaller White Rock Smith’s said it used 72,000 per month, Machen said. He said the managers had “no idea” what happened to the recycled bags they collect once they were shipped to Arizona.

County Staff Liaison to the Board Angelica Gurule said that the County does not recycle plastic bags because they have no market for them.

The first motion, made by Han, favored recommending a fee on plastic or paper bag single-use bags. It was supported by Machen and Haverman. Han said people would not think about bringing bags to the store if they were provided with free bags.

“The benefits outweigh the inconveniences,” Haverman said. “Sometimes decisions are made in a community or civilization for the greater good when the social cost is greater than the personal cost.”

“We’re talking about the whole world,” Machen said. “This is not something we can just blow off.”

Terrill said the community has shown it is not ready for the imposition of a fee on single-use bags. West agreed. Boerigter expressed irritation that the Council has not approved the Board’s Sustainability Plan, which he considers much more important than the bag issue. He said getting the Plan in place “would be a better place to put our energy.”

Comments from the public mostly reiterated what the two presenters had put forward. When the question was called, the lines were clear-three for and three against- and the motion failed. Next came a motion to take no action on single-use bags. This time Terrill and Boerigter voted yes and the remaining Board members, including West, voting no.

West suggested forming a committee to research alternatives to a fee system. This motion was defeated 5-1.

Terrill next proposed telling the Council that no future action should be taken on a bag ban or fee. This motion failed 4-2, with Terrill and Boerigter in support and the rest of the Board opposed.

At this point, the Board gave up on a recommendation to County Council and moved on with its agenda.