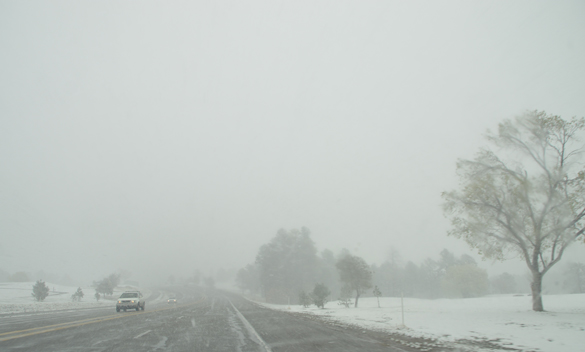 April showers turned into snow, wind and cold temperatures today throughout Los Alamos including along Diamond Drive near the golf course. Photo by Carol A. Clark/ladailypost.com 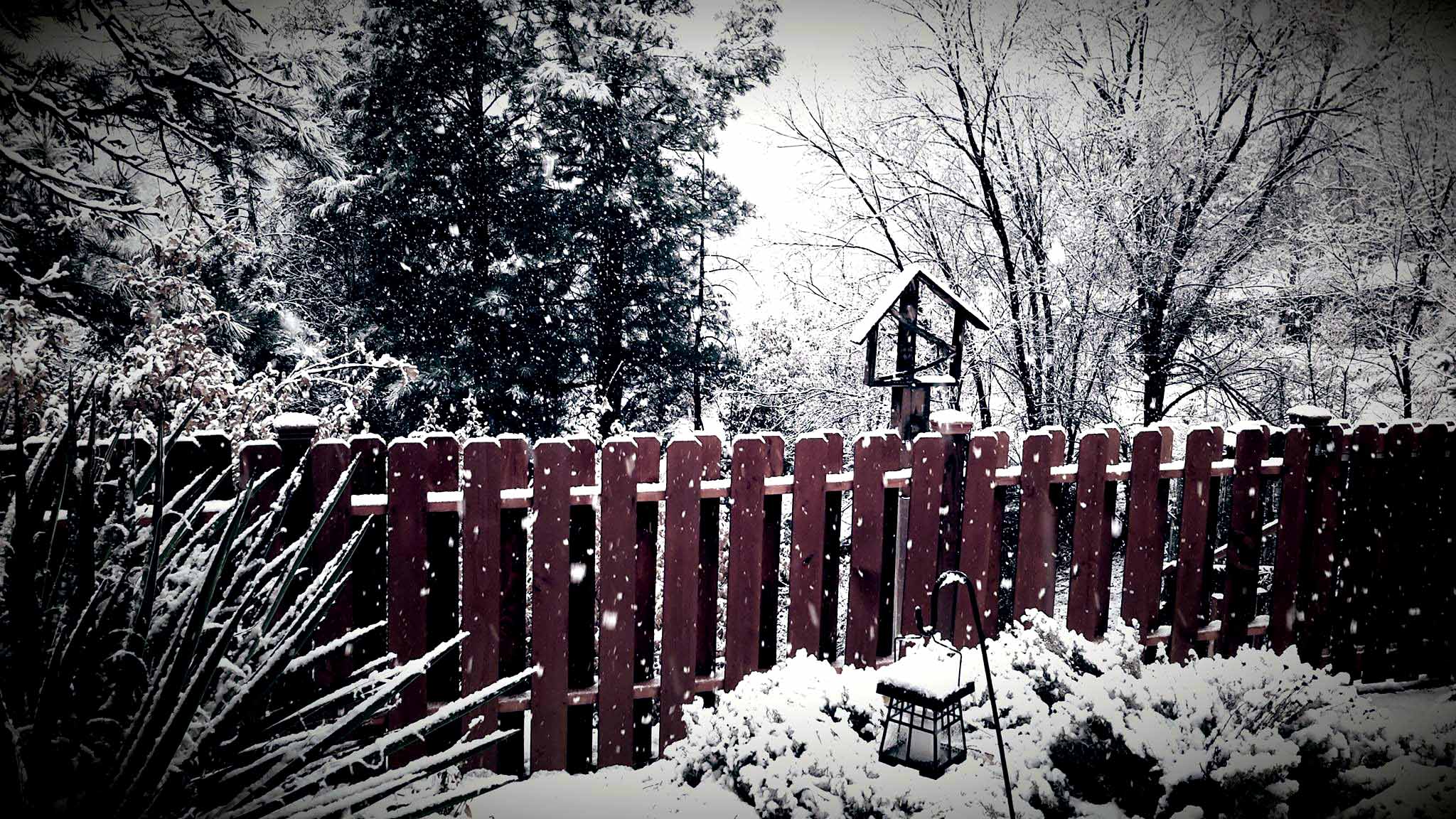 Snow and windy conditions caused riders to walk their bikes this afternoon on Diamond Drive. Photo by Carol A. Clark/ladailypost.com

Submitted by Chris Clark on April 4, 2017 No Comments 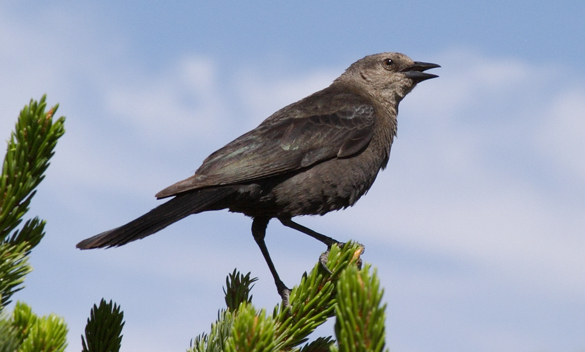 A mother Brewer’s Blackbird surveys the area from the top of a conifer. Photo by Bob Walker
PEEC News:
Want to know how to attract more birds to your back yard?
The Los Alamos Master Gardeners are working with the Pajarito Environmental Education Center (PEEC) to offer a free talk centered around creating a wildlife-friendly landscape from 7-8 p.m. Thursday, April 6, at the Los Alamos Nature Center.
Master Gardeners Carolyn Mangeng and Bob Walker will share how to make your back yard gardens a haven for native birds and wildlife.
This presentation,
Tags:
Community Education Environment 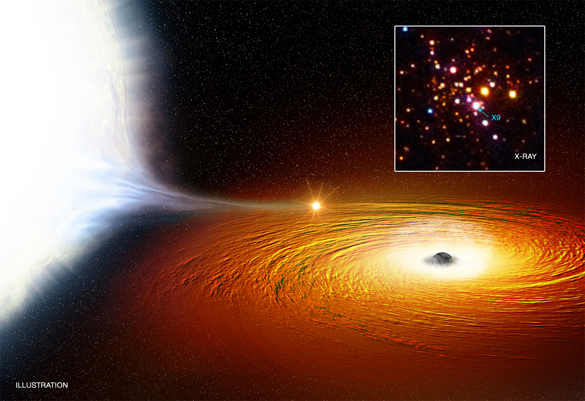 Credit: X-ray: NASA/CXC/University of Alberta/A.Bahramian et al.; Illustration: NASA/CXC/M.Weiss
NASA News:
Astronomers have found evidence for a star that whips around a black hole about twice an hour. This may be the tightest orbital dance ever witnessed for a likely black hole and a companion star.
This discovery was made using NASA’s Chandra X-ray Observatory as well as NASA’s NuSTAR and CSIRO’s Australia Telescope Compact Array (ATCA).
The close-in stellar couple — known as a binary — is located in the globular cluster 47 Tucanae,
Tags:
World Environment Science

SANTA FE – Updated Motor Vehicle Use Maps (MVUMs) that show all forest roads and trails open to motor vehicle travel on the 1.6 million-acre Santa Fe National Forest are now available in both electronic and hardcopy formats.

National forests are required to designate a system of roads, trails and areas open to motor vehicle use by class of vehicle and, when necessary, by time of year.  Public motor vehicle traffic is prohibited on all routes not shown on the MVUM. Visitors to the forest are reminded that it is their responsibility to determine if they are on routes designated for

AGU News:
WASHINGTON, D.C. — The last remaining piece of the vast ice sheet that once covered North America is doomed to vanish in the next few centuries, a new study finds.
Rising temperatures in the Arctic have caused the Barnes Ice Cap to melt at an extraordinary pace, and nothing short of removing carbon dioxide from the atmosphere can prevent it from completely disappearing, according to a new study modeling the ice cap’s behavior.
Under a business-as-usual greenhouse gas emissions scenario, the study’s authors project the ice cap will disappear within the next 300
Tags:
World Environment Science 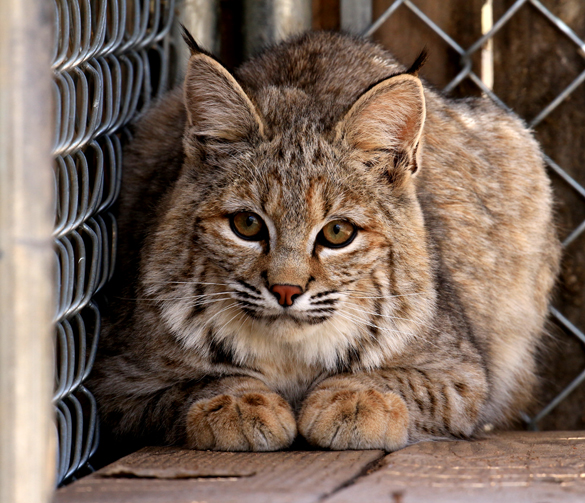 This rehabilitated bobcat rescued in the area is growing stronger every day under the care of Dr. Kathleen Ramsay of the Land of Enchantment Wildlife Foundation. The bobcat (Lynx rufus) is a North American cat that appeared during the Irvingtonian stage of around 1.8 million years ago (AEO). Containing 12 recognized subspecies, it ranges from southern Canada to central Mexico, including most of the contiguous United States. The bobcat populations are vulnerable to local extinction by coyotes and domestic animals. Though the bobcat prefers rabbits and hares, it hunts insects, chickens, 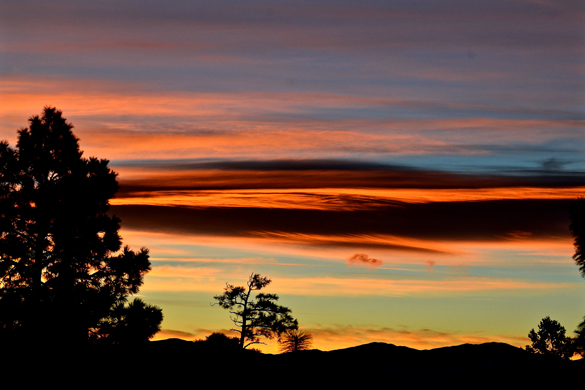 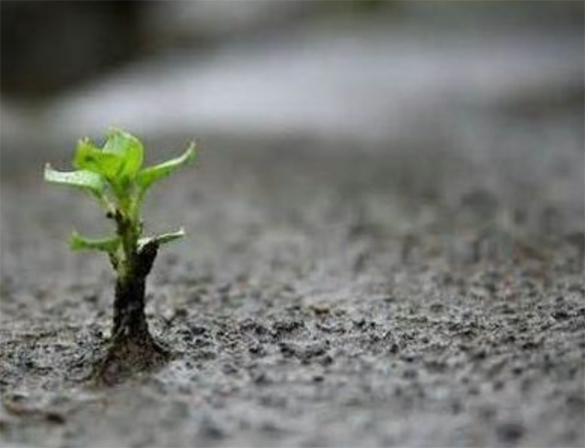 SANTA FE – Members of the public are invited to the 2017 “all hands” meeting for a comprehensive update on the largest landscape-scale forest restoration project in New Mexico April 12-13, 2017, at the Santa Fe Community College (SFCC). 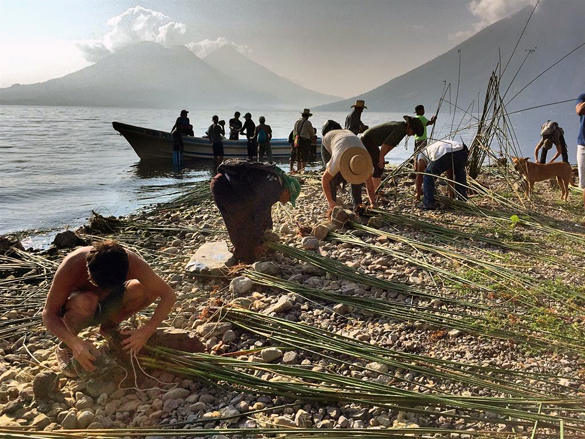 A friend recently told me that Rotary clubs in the US and Canada raise money, and in Central America the Rotary clubs spend it.

Since retiring, I have spent four winters in Guatemala. After seeing the wonderful programs that are supported down here by Rotary, I joined a club on Lake Atitlán. I have attended annual regional Project Fairs, first in Antigua, Guatemala, and subsequently in Nicaragua, Honduras, and El Salvador. I have seen 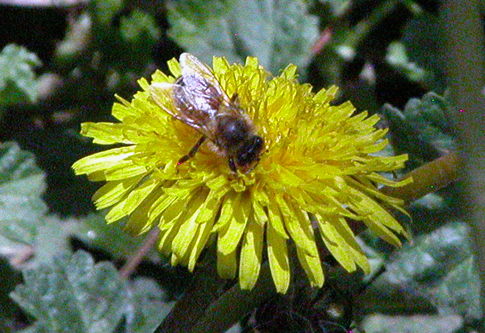 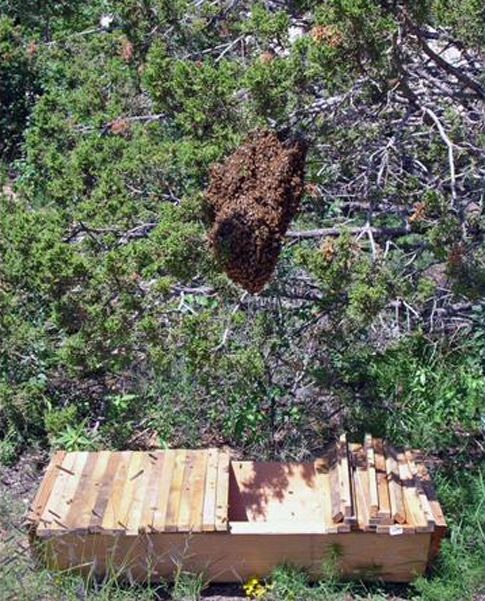 Ever wondered what goes on in the life of a busy bee? The Pajarito Environmental Education Center (PEEC) offers a workshop 1:30-3:30 p.m., April 9 with Dorothy Brown at the Los Alamos Nature Center about the biology and colony dynamics of honey bees. This is a great introduction for anyone curious about these non-native pollinators.

What is happening inside the seemingly crowded honey bee colonies? Brown will discuss the three castes of honey bee and how they contribute 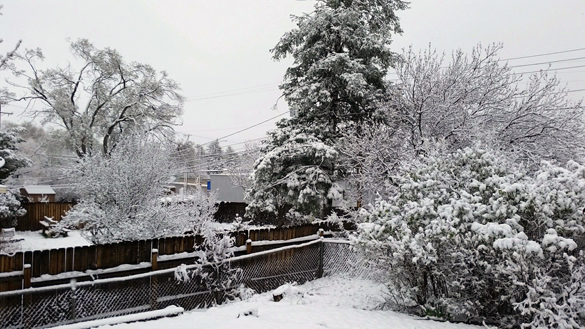 Snow falls this afternoon over Los Alamos including this yard on 39th Street. Photo by Julie Smith 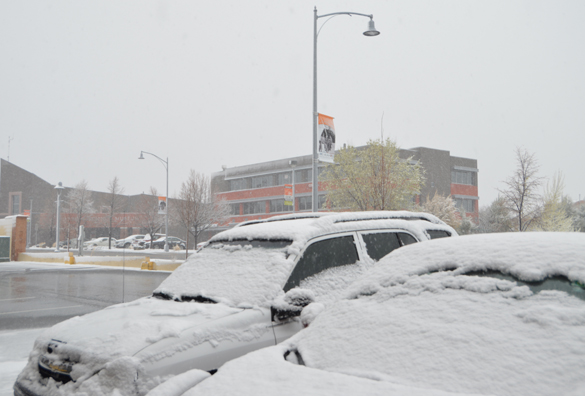 Snow falls this afternoon over downtown Los Alamos. Photo by Carol A. Clark/ladailypost.com

Submitted by Chris Clark on April 1, 2017 No Comments 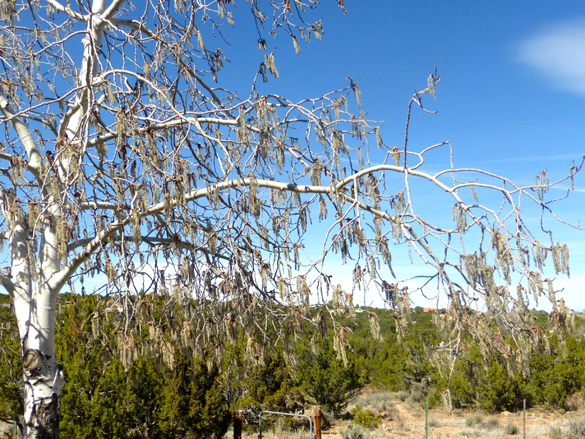 Daily Postcard: This year, the aspen tree in this back yard in Pajarito Acres has an excellent set of catkins. Technically a flower, it is one on the earliest blooms in the area. Photo by Bob Reedy

Submitted by Kirsten Laskey on March 31, 2017 No Comments 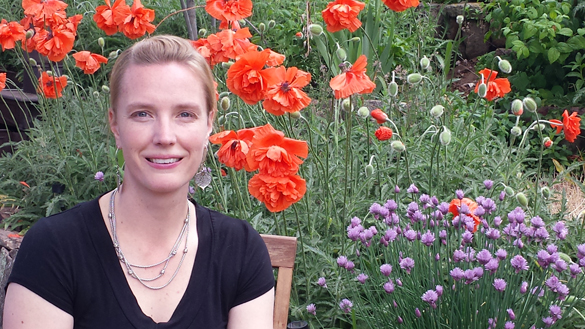 Laural Hardin, a certified horticulturalist and arborist as well as a new associate at the Pajarito Greenhouse, will be one of the presenters Monday at the Summit Garden Club meeting. Courtesy Photo

The program will be provided by Dave Fox, owner of Pajarito Greenhouse for 18 years now, and Laural Hardin, certified horticulturalist and arborist and new associate of the Greenhouse.

Hardin grew up in the nursery business in Arizona, and spent eight

Can The Southwest Endure A Change In Climate? 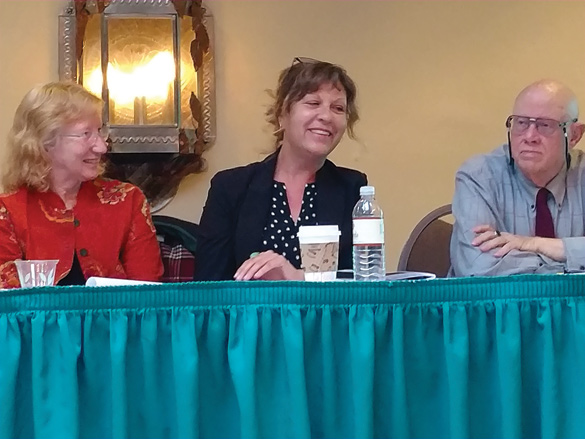 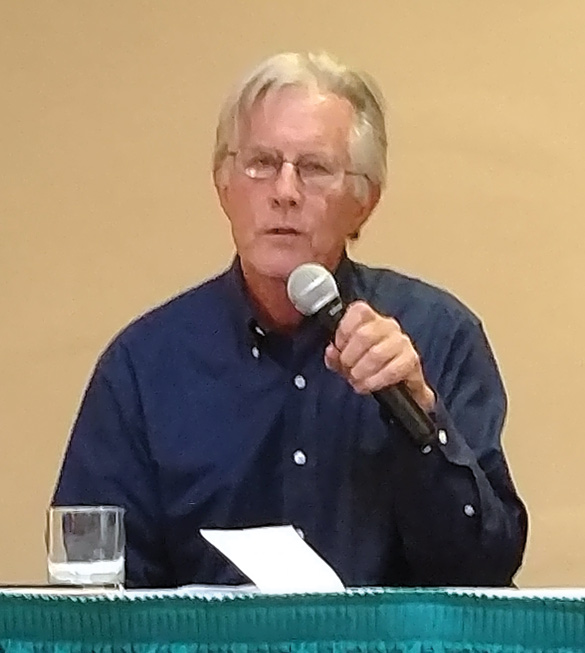 According to Bill deBuys, author and full-time humanist, climate change leads to an enervating depression trap. Photo by Roger Snodgrass/ladailypost.com

Tales Of Our Times: When Poisons Move, Risks Evolve

Toxic materials in nature are like a stack of ball bearings on a subway platform. They pose little risk until they start to move.

Follow the trail of the Earth’s store of hazardous materials and the shuffling that moves them through the air and water. The forces are geologic history, weather, time, and inexorably man. Without man’s doings, toxic substances are widely found in nature, in some places more than others. The bad stuff ranges from arsenic, sulfur, mercury and uranium

Submitted by Chris Clark on March 31, 2017 No Comments

NPS News:
WASHINGTON, D.C. ― Ring in spring with a visit to a national park during National Park Week, April 15 through 23.
Throughout the country, hundreds of programs and events will encourage visitors to explore new places and enjoy new experiences. More information is available at www.nationalparkweek.org.
“Our National Parks are our national treasure,” Secretary of the Interior Ryan Zinke said. “My formative years were spent in Glacier National Park and one of my biggest mentors was a park ranger and football coach. The
Tags:
Community Nation Recreation Environment 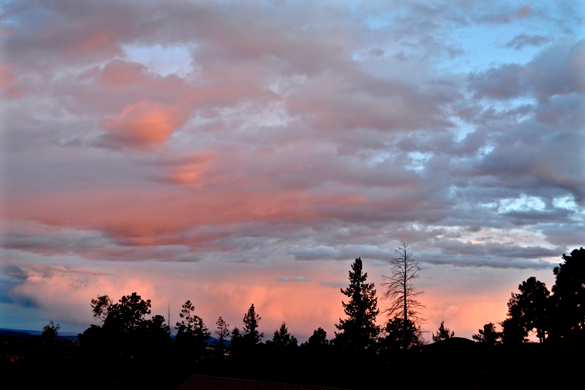 Submitted by Kirsten Laskey on March 30, 2017 No Comments

Sheep herding on a large scale developed in the early 20th century in the Valles Caldera. For example, Franklin Bond, the owner of this area, established 17 sheep camps for the summer of 1918 with an estimated 21,000 sheep among them.

He employed 73 people to help with the sheepherding. Another person estimated that 100,000 sheep were grazing in the area in the summers of 1917 and 1918.

This suggests that up to 350 people were involved in sheepherding when compared proportionally to the Franklin Bond employment. 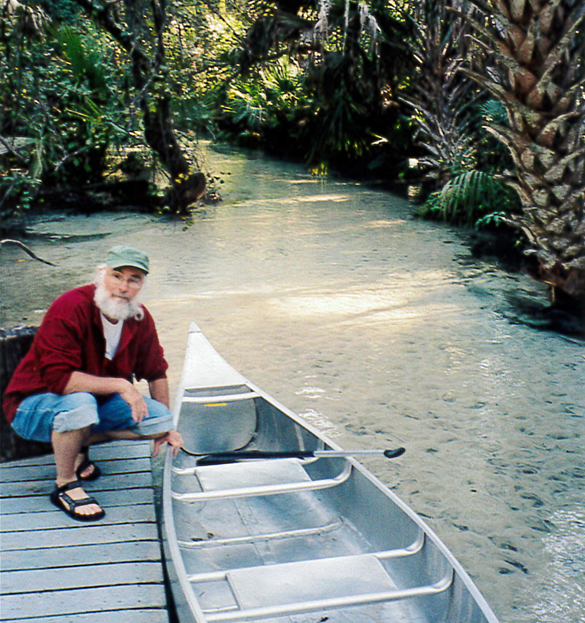 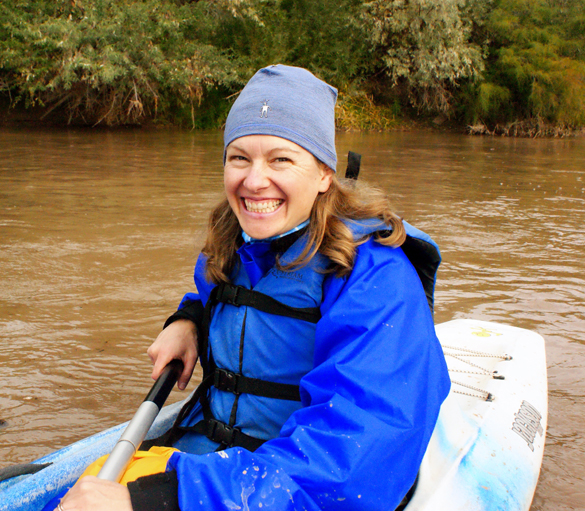 The Los Alamos Department of Public Utilities is bringing four speakers and a film to the Los Alamos Nature Center 6:30-8:30 p.m. Tuesday, April 4.

The evening starts with a discussion about local rivers and water issues by four speakers followed by a break with refreshments and a chance to meet the speakers. Afterward, they will show the documentary