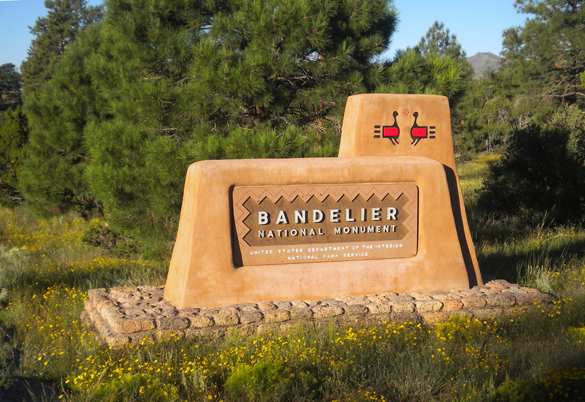 When looking for holiday gifts, Bandelier suggests considering giving gifts of entry to all the National Park areas in the country for a full year.
Drop by the Visitor Center at Bandelier and buy an Interagency Annual Pass. With this pass, the recipient can visit all the National Park Service areas across the country (think Petroglyph, Pecos, Grand Canyon, Everglades, Glacier, Rocky Mountain and 395 others.
The pass also includes areas under the Bureau of Land Management like Tent Rocks – Kasha Katuwe, US Forest Service including Mount St Helens and the US Fish and Wildlife with locations such as the Bosque del Apache and Las Vegas Wildlife Refuges. In addition, the Valles Caldera National Preserve may begin honoring these passes sometime in 2015.
For $80, the pass is good for a year from the month it is purchased, so one bought this December is good through the end of December 2015. Many of the larger parks, such as Yellowstone or the Grand Canyon, charge $25 per visit, so the pass can repay its cost in just a few visits. To make it all the better, many National Park Service areas will be raising their entrance fees in 2015 – but the annual pass will still apply. And money from passes bought at Bandelier stays in Bandelier. This year’s passes (good through 2015) will be available while supplies last; next year’s will come on sale beginning in January.
Or how about a full year of visits to Bandelier National Monument? If the person you have in mind isn’t planning any extended trips, an annual pass for just Bandelier might be just the thing. For only $30, the pass is good for a year from the month it is purchased, and the recipient can visit Bandelier, including the Tsankawi section, as many times as they wish during that time.
Unlike the Senior Pass or the Access Pass, which have to be issued to the holder in person, the Bandelier and Interagency Annual passes can be bought by anyone for anyone (of course, once they’re signed, they can’t be transferred). Their year begins on the date they are purchased, not the date they are given. They cannot be refunded. Both passes admit the card owner along with others who are in the same private vehicle. And – while you are thinking about passes as gifts, you might also think about getting one for yourself.
When you come down to the Bandelier Visitor Center to pick up one of the passes, be sure to also stop in at the bookstore and the Bandelier Trading gift shop. The bookstore has a fine offering of books and other educational and outdoors items, and they will be offering 20 percent off on hats and T-shirts until the end of December. Bandelier Trading carries high quality Native American jewelry, pottery, and rugs, as well as a great variety of gift items. Besides various in-store specials, they have an on-going 10 percent discount for local residents; just mention it anytime you make a purchase there.
Of course any visit to Bandelier is a good opportunity to take a walk along the trail to the cliff dwellings or to the Upper Falls, see the park movie, or spend some time in the museum. The shuttles won’t be running until next spring, so just drive on down.
For more information, call the Bandelier Visitor Center at 505.672.3861 x 517. 9 a.m. to 4:30 p.m. daily. The monument also offers a website, nps.gov/band, and a Facebook page, BandelierNPS.
Menu
Los Alamos
28°
Clear
6:38am5:57pm MST
Feels like: 28°F
Wind: 0mph WSW
Humidity: 82%
Pressure: 30.1"Hg
UV index: 0
FriSatSun
46/30°F
46/27°F
43/27°F
Weather forecast Los Alamos, New Mexico ▸