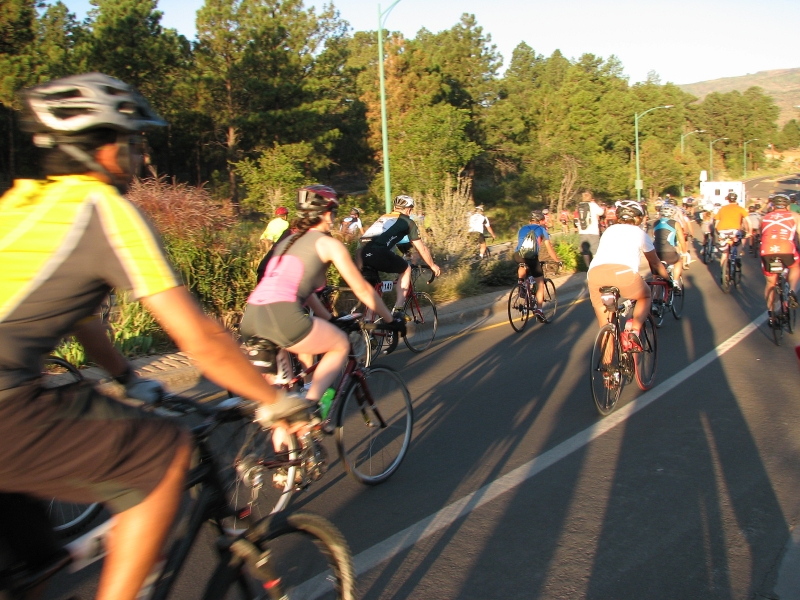 Whenever people drive by Gabe Wadt’s house in Los Alamos, they want to know what all that stuff in the garage is for. From out in the street it’s easy to imagine that a small UFO has landed in the driveway.

Actually, the green and black machines in Wadt’s garage have made it possible for the 24-year-old entrepreneur to walk away from a 9 to 5 business analytics job to create a higher paying career for himself from his home.

His business, Greenstar Studios, is one of the fastest growing businesses in Los Alamos. The screen printing and graphic design studio specializes in creating logos and prints for individuals, clubs, teams and businesses. They print on materials like shirts, hats, glass and steel.

One of the reasons that Wadt believes his business took off so quickly is that he is excited about working for himself, which gives him the confidence he needs to talk about his services.

“I didn’t like cold-calling when I was in the business world because I had no connection to, or passion for, the business,” he said. “Here, I feel something, and so it’s easy to go out and talk to people.”

CB FOX Department Store became one of his first customers. Greenstar Studios now makes the Atomic City t-shirts and a new design displaying Dr. J. Robert Oppenheimer, which is one of their best sellers, he said.

Wadt’s success at securing clients meant that he had to learn the finer details of the business fast, or pay the price. When a t-shirt or product is not up to a customer’s standards, Greenstar Studios’ policy is to re-do it, free of charge.

“If people knew about the work that goes into making a t-shirt, they would appreciate it more,” Wadt said.

As Wadt set up his business, he found mentoring and support from the owners of Red Barn Screen Prints and Los Alamos Landscaping. More recently, he met with Nicholas Seet (Nik), the founder of the Los Alamos Venture Accelerator, aka LAVA, to discuss how Greenstar Studios can expand.

Wadt first heard about Seet from his father, Bill Wadt, who is the chairman of the board for the Los Alamos Commerce and Development Corporation (LACDC). The LACDC, along with a few other investors, made LAVA possible by commissioning Seet to customize his online business accelerator to fit the needs of Los Alamos entrepreneurs. In preparation for the official launch of the LAVA program in September, Seet has been meeting with local entrepreneurs like Wadt.

“It was one of the best meetings I’ve had in my life,” Wadt said. “Nik was uplifting and empowering. He didn’t talk about himself but kept everything focused on what I’m doing. He sees everything on a bigger level, and on a grander scheme.”

One of the ways Seet plans to help new businesses is by helping them raise capital for initial business expenses like launching a website or buying equipment with crowd funding.

“I don’t need crowd funding right now because my business is making a profit,” Wadt said. “But I remember saving up for my equipment and scrounging for that money. It’s demoralizing to be slowed down trying to save money just to get started. If only I had met Nik during that time, he would have helped me write a business plan that I could have used to get funds to get that equipment and get into business much faster.”

Even though Wadt didn’t need Seet’s help to raise money, he said that he found LAVA to be very valuable.

“Nik is creating a network of like-mined individuals,” Wadt said. “That is so reassuring, because I don’t have that kind of a network in my life. My friends don’t understand what I’m doing.”

Another reason LAVA’s network of entrepreneurs, mentors, investors and service providers appeals to Wadt is that it will make it easier to find help when he needs it, he said.

“I realize that I am a job creator. I can’t do all this work on my own,” Wadt said. “With LAVA, I can find the resources I need because there will be people with different skills and experiences. They showed me how LAVA was applicable to any type of business. I think LAVA is one of the coolest, most innovative things in Los Alamos. I hope people can recognize the potential LAVA has as in incubator … it’s not about money, but about people to people who believe in themselves and in others. Even if your business idea fails through LAVA, you will have built up a group of supporters who will make it easy to move on to the next idea. Nik is the ideal person to lead the organization.”

Los Alamos Venture Accelerator is now recruiting entrepreneurs and mentors in anticipation of its official launch Sept. 5, at the Los Alamos Science Fest. People can get involved and stay informed by signing up at http://lava.guru.