Editor’s Note: This is the first in a series of six County Council candidate profiles. 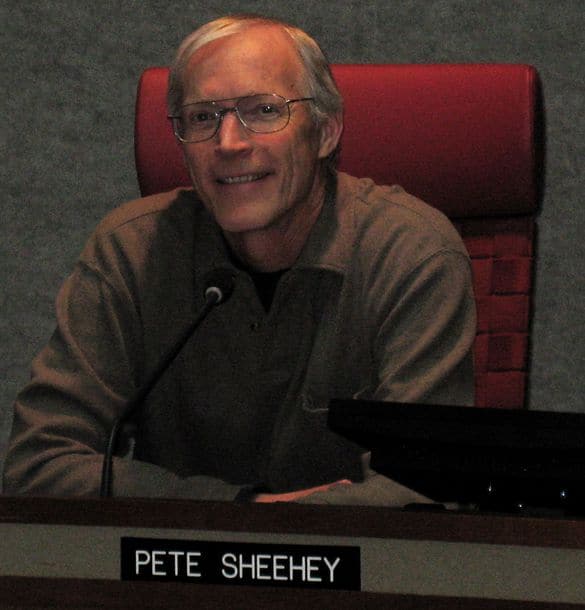 Scientist Peter T. (Pete) Sheehey describes his career at Los Alamos National Laboratory as satisfying but said that he was in a financial position that enables him to accept the Laboratory’s Voluntary Separation Program – “leaving room for younger scientists.” His final day at LANL is April 5.

“This allows me to offer my time and skills to making our government work better for the people of Los Alamos,” said Sheehey who filed to place his name on the June 5 Democratic primary election ballot for Los Alamos County Council.

“I have lived and worked in this community for 25 years,” he said. “Los Alamos has been a good home for me but I think we can make it better.”

Sheehey has long been active in the community. He has served on the Los Alamos County Planning and Zoning Commission since 2008 and currently serves as vice chair.

He is president of the Los Alamos Committee on Arms Control and International Security, a bi-partisan group that studies arms control and related issues.

“My wife Naishing and I have knocked on many doors and talked to many people here over the last few years,” Sheehey said, adding that he has come to realize that his experiences are typical of the people in this county.

“I believe that I could be a good representative for them on the County Council,” he said. “Los Alamos County government spends a great deal of taxpayers’ money every year, and we need to make sure it goes where it will do the most good.”

Sheehey discussed his stand on whether citizens should have the right to vote on Capital Improvement Projects, an issue that came before the Council and was rejected.

“Major new capital projects above a reasonable threshold, such as $5 million to $10 million, should be subject to a popular vote,” he said. “There aren’t that many such projects, no more than one or two each year, so this would not require many additional elections. It would require the Council and the proponents of any project to make a clear case to the people who will ultimately pay for the project. Capital expenditures to maintain existing infrastructure should not be subject to popular vote; that is one of the jobs we elect the County Council to do.”

Sheehey spoke in favor of the Trinity Place Project.

“I supported the project – it may not be everything we want but it is a step forward and will bring in some money for the schools and provide some additional shopping choices for the community,” he said. “This project did get approved by the voters and I believe the voters should have the last word on major projects. I disagree with those who say that this would hinder us from getting things done – the Trinity Place Project is an example in which voters approved the project and now it’s moving forward.”

Sheehey is an award-winning CD producer and received the 2006 New Mexico Music Awards for “Holy Ground,” by the Immaculate Heart of Mary Catholic Church Quartet for his non-profit “Sheehey Arts Foundation.”

Sheehey served in the U.S. Air Force from 1976 to 1979 and as a field engineer for General Electric Medical Systems and Bendix Field Engineering

To learn more about this candidate, visit www.petesheehey.com.