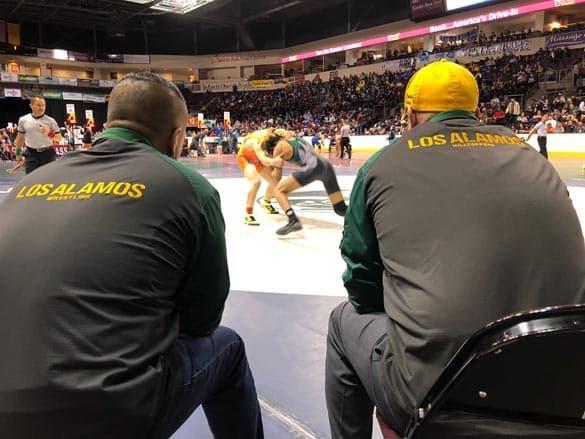 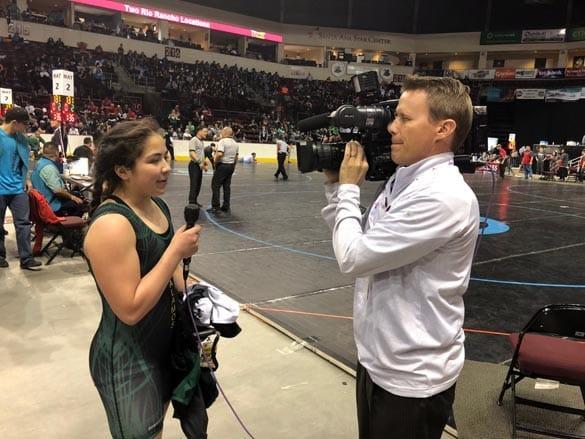 By RJ MONTAÑO
Los Alamos Daily Post
rjmontano@ladailypost.com
RIO RANCHO – A strong start for the Los Alamos Hilltopper wrestling team as eight athletes moved onto the winners bracket in the first round of the New Mexico Activities Association’s State boys’ and girls’ wrestling tournament held Friday and Saturday at the Santa Ana Star Center in Rio Rancho.
Consolation Round 1
Heading into the consolation round matches, Los Alamos was sitting tied for seventh place with Del Norte. The ‘Toppers needed a strong showing to stay in the top 10, and got more than that with a clean sweep of the first round consolation matches.
Los Alamos finished the first round of consolation matches alone in first place with 43 points.
Championship Quarterfinals
The championship quarterfinals didn’t go quite as well for the ‘Toppers. Los Alamos won the first match of the quarterfinals, but was swept for the rest.
Devin Atencio started the round off with a dominating performance over Kirtland Central’s Devin Montaño winning by pinfall 2:32 into the match. Atencio advances to Saturday’s semifinal match where he’ll take on Raul Sisneros out of Belen.
Devin Gonzales took Valencia’s Devon Martinez the distance dropping a 10-3 decision in a hard-fought match.
Israel Gellis lost by pinfall to Los Lunas Tiger Jordan Gallegos 2:24 into the match. Gallegos took control early in the match, wearing Gellis out for the pin.
Belen’s Rowdy Robinson didn’t need much time to pin Ty Nieto – 34 seconds to be exact.
There was a scary moment in the 182-lb match when Dylan Irish was in the middle of a very competitive match with Los Lunas Tiger Santiago Salas. Irish was trying to escape a grapple when suddenly Irish grimaced, stopped wrestling, and was pinned. Irish laid on the mat face down for several minutes in obvious pain while trainers worked on his left shoulder. Irish walked off the mat under his own power with a “shoulder tweak.”
Dimitri Bullock drew a familiar opponent in district foe Julian Sanchez of Capital. Sanchez earned a quick pin in under 50 seconds for the win.
Milo Light’s match against Deming’s Issac Acosta came down to the wire with Light falling in a 3-2 decision. Light took an accidental head-butt early in the match that gave him a bloody nose. The match was stopped several times to address the bloody nose.
With seconds left in the match, Light nearly scored on a takedown, but it was ruled both wrestlers came down out of bounds.
Gloria Ramos fell to Selvi Gallegos by a 6-2 decision in a very evenly matched quarterfinal. Gallegos picked up four points in the final minute to claim the decision.
“Gloria is going to be an MMA champion some day,” Head Coach James Hatt said. “If I had a team that gave as much effort and put in as much work as [Ramos], we’d be undefeated.”
Los Alamos finished the day in sixth place, four points behind Farmington. “Our goal is to finish in the top five,” Hatt said before the tournament. His team had some work to do on championship Saturday. 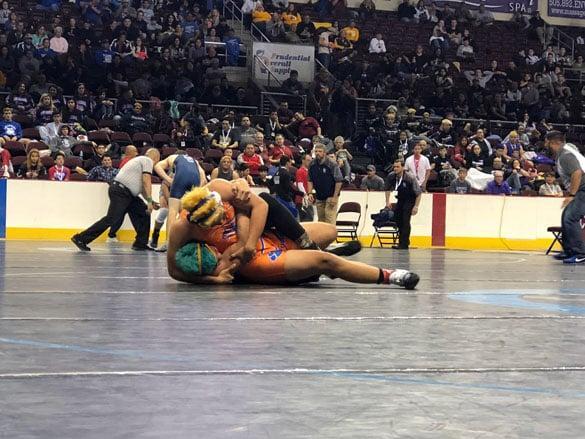