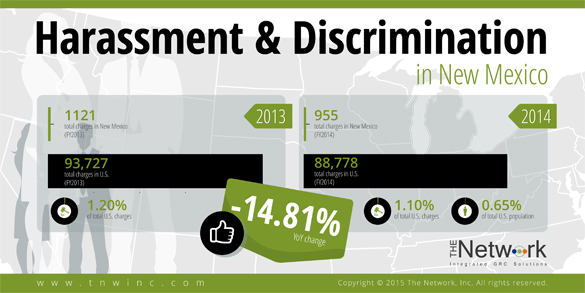 Additionally, the EEOC speculates this could a result of businesses  putting more time and effort into employee training programs to ensure employees understand what kinds of behavior constitute harassment and discrimination and how to report it if it occurs. Furthermore, the EEOC believes the data shows that workplaces in the state realize how important it is to eliminate harassment and discrimination. These types of cases are no longer swept under the rug; the EEOC has made a conscious effort to penalize organizations and individuals that participate in discrimination and harassment.

The bad news, however, is these findings could more of a result of the government shutdown that occurred during the first quarter of the reporting period. Charges filed nationally during the first quarter were 3,000 to 5,000 less than the other quarters. This could mean that the state’s data was also skewed by the government shutdown. It’s also possible that the declining trend may actually indicate a lack of awareness of reporting protocols rather than a decline in discrimination and harassment incidents.

Preventing harassment and discrimination in the workplace starts with a solid Code of Conduct, a zero-tolerance commitment and training that includes step-by-step instructions on how to report violations of the expected behavior set forth in the Code.

However, the EEOC argues companies often hand employees a 200-page Code of Conduct with little or no training around the company’s values and policies, even though such a lengthy tome (particularly when written in legalese) is unlikely to engage employees or inspire them to read it cover to cover.

The Code should be an interactive, approachable and engaging guide to the employer’s values and expectations for behavior. Employers must then back up the Code by providing supplemental training that reinforces key points and promotes retention. Training should clearly explain what counts as discrimination and harassment, and how to appropriately respond to these situations should they arise in the workplace.

The goal of every company should be to develop a speak-up culture. Employees should feel comfortable speaking up about unethical behavior they witness. Managers also need to know how to handle such reports and how to escalate them.