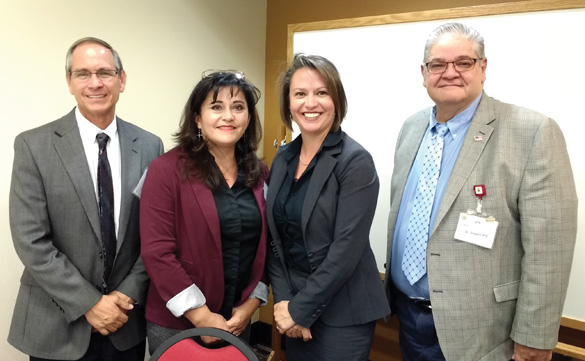 Hundreds of community leaders from throughout northern New Mexico gathered Sept. 28 at the Ohkay Owingeh Conference Center to discuss strategies for growing the regional economy at the Fourth Annual Regional Economic Development Initiative (REDI) State of the Region conference.

The REDI initiative, which is a formal partnership between Los Alamos, Rio Arriba, Santa Fe County Taos County, Espanola, the Town of Taos and the City of Santa Fe is a long-term strategy to grow northern New Mexico’s economy in targeted economic clusters. The seven original partner communities set specific strategy goals to work towards and at this year’s conference they held breakout sessions to delve deep into targeted areas.

Local economic development professionals, governmental representatives, elected officials and members of the business community gathered to tackle some of the issues facing economic growth in northern New Mexico through a series of panel discussions; each focused on a different theme.

One of the headline panels, which drew much of the attention at the conference, was the “Education” panel, tasked with addressing the question of the teacher shortage in New Mexico. Heading up the education panel as the facilitator was State Rep.  Stephanie Garcia Richard, herself an educator in northern New Mexico at the Pojoaque school district.

The panelists began by each giving a short background on their education experience and addressing the teacher shortage from their own perspective.  The panel then opened up to hear feedback from members of the audience, many of whom were teachers.

One of the major themes to come out of the panel discussion and influenced heavily by a question from Alan Webber, a participant at the conference was, “What does northern New Mexico have to offer that is unique?”

It was established by the discussion in the room that northern New Mexicans – and New Mexicans in general – want to remain in New Mexico to live and work.  This was bolstered by a statistic offered by Dr. Trujillo that “60 percent of teachers in New Mexico teach 20 miles from where they graduated high school”. Ideas were shared of how to better train and recruit local high school graduates into the teaching profession, rather than merely hiring to plug the shortage from out of state or even out of the country. Merely filling vacancies with unprepared teachers was viewed as part of the problem in retaining teachers and in maintaining school quality.

Notions of teacher pay and respect for the profession also were heavily focused on and what to do in order to “build a culture of respect for teachers and their profession”.

Finally, after the panel had gone significantly overtime, with multiple audience members wanting to weigh in, Dr. Cedric Page, Regional Development Corporation board member and Los Alamos University of New Mexico faculty member, piped up with a concrete idea.  Since, he mused, we had representation at the conference from so many businesses, wouldn’t it make sense for businesses themselves to try and influence the culture of education? He proposed that businesses should band together to offer parents paid time off to attend school functions such as conferences, performances or games. This, he concluded, would demonstrate the regard that businesses and the local community have for education and would in turn encourage parents to be more participatory in their child’s education.

The room broke into applause. This seemed like an appropriate and effective end to participatory and engaging discussion on education in northern New Mexico.