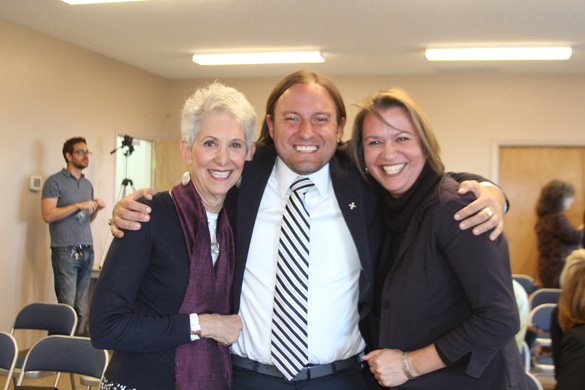 The Straight A Express rolled into Los Alamos Tuesday. New Mexico Education Secretary Christopher Ruszkowski is visiting the 121 schools in New Mexico that earned A grades in PED’s evaluations. He attended a reception Tuesday at the School Board Meeting Room.

“This is a district that earned six A grades,” Ruzkowski said. “Los Alamos takes kids to the next level.”

Los Alamos High School earned its fourth straight A ranking this year. Pinon, Chamisa, Mountain and Barranca Elementary Schools raised their ranking from B to A this year, while Aspen maintained it’s A rating.

“PED (Public Education Department) should be up here learning from you,” Ruzkowski said.

PED has been under fire for proposed changes to the Next Generation Science Standards in its proposal for new state science standards. New Mexico is set to become the 19th state to adopt the Standards.

Nearly everyone seems to agree that New Mexico needs to update its existing science standards, which were adopted in 2003, Ruzkowski said. “The proposal on the table is a massive upgrade. Let’s celebrate how much progress we have made,” he said.

The controversy centers on changes to the Standards, including deleting the word evolution and replacing “rise” in global temperatures with “fluctuations” in temperature.

The Los Alamos School Board and teacher’s organizations as well as parents and students have protested the changes. PED recently received a letter signed by 61 Los Alamos National Laboratory Fellows claiming the changes had “no scientific rationale.”

Ruzkowski assured the Los Alamos audience that the PED, “still has a lot of listening to do.” He also assured the group that PED is committed to “providing flexibility” to districts in science education.

The New Mexico Public Education Department will hold a public hearing on the proposed standards at 9 a.m. Monday at the Jerry Apodaca Education Building, 300 Don Gaspar Ave. in Santa Fe.