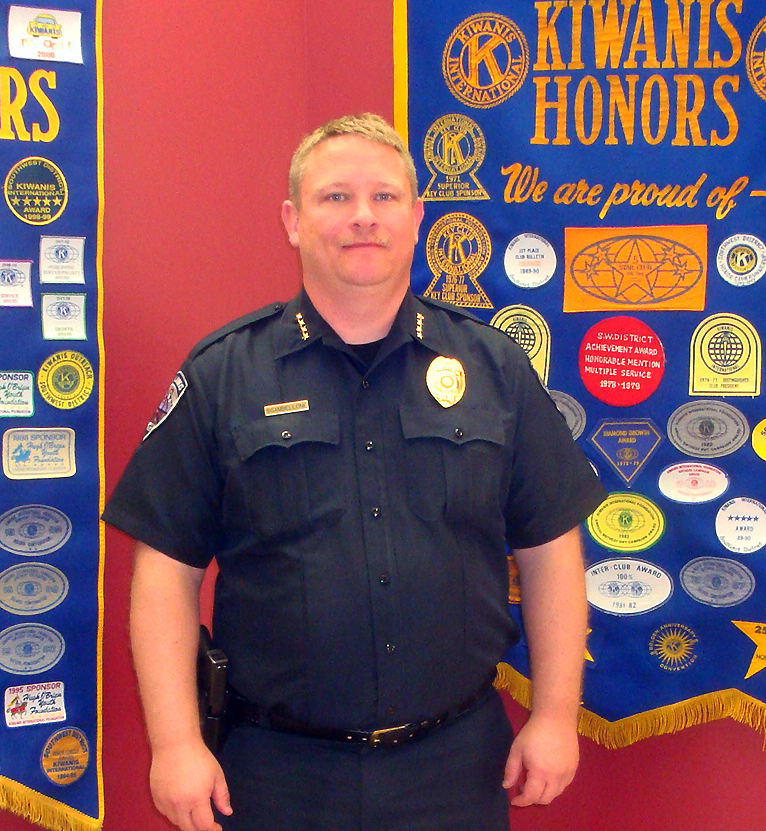 Los Alamos Police Chief Dino Sgambellone worked in Mansfield, Ohio, for more than 22 years before accepting his new post in Los Alamos last Novemeber. As the featured speaker at Kiwanis March 11, he shared many thoughts about the differences between policing in the two cities.

He also brought up some interesting ideas about changes he might make here.

Sgambellone served in the Air Force from 1987 to 1990, obtaining an Associate’s Degree in industrial security while he was in the service. He subsequently earned a master’s degree in business and a Ph.D. in public safety with a criminal justice specialization.

When he left the Air Force, he moved home to Mansfield, where his father was a firefighter. He took the tests for both the Fire Department and the Police Department, he said, but, “The police hired me first.” He went to work in Mansfield March 17, 1991, and served in numerous capacities within the department—including patrol, community policing, SWAT, field training, first line supervision, section commander for special investigations, and project director for a 10-county decentralized task force—before becoming chief of police. He left the Mansfield Police Department Nov. 12, 2013, and accepted the position as chief of police in Los Alamos, moving here with his wife Robyn, his son Nick, 16, daughter Emily, 11, and a schnauzer, Oreo.

He has been in Los Alamos about four months. “We love it,” he said. He added that the kids in school are “nice to his children,” and Los Alamos “has a great county government.”

His work for the Police Department in Mansfield, he said, was “challenging but rewarding.” He noted that in police work there, “You dealt with a lot of things other careers don’t have to.” In addition, Mansfield had lost a General Motors plant and was facing “fiscal challenges.” As a result, he said, he had no chance to be proactive during his three years as chief there.

Los Alamos, he said, is in a “much bettter fiscal position,” and has “an extremely low crime rate”—both factors that should allow for proactivity.

“I’m particularly fond of youth programming,” he said, adding that he thinks it is valuable for the public to see police as “something more than ticket-writers who take people to jail.”

Right now, he said, he is taking some time to understand the local point of view before making any changes.

Los Alamos has a great Police Department, he said, and good people “make all things possible.” Nevertheless, he expects that he will be making some organizational changes soon, he said. He noted that at the County Council’s request (to all departments), he is reducing the budget and holding off on some replacements, but he doesn’t foresee any downgrading of service. He recently hired three officers, increasing the number on the street to 32 (plus the detention and support staffs). He eliminated one position and left two empty.

He noted that the Los Alamos Police Department is accredited through the State of New Mexico, and he views that accreditation as important. “We may look at national accreditation,” he said.

“I’m going through an extensive policies and procedures review,” he said, adding that any changes he makes “will have a purpose.”

He feels that data collection is important, and he sees some limitations in the Los Alamos Police Department software. He would like to analyze crash data to see if any changes could be made to reduce accidents.

“A lot of my background has been in narcotics (enforcement)” he said. He has received feedback here that indicates that, “We do have a problem … Every school, every community does.” He wants to use not only enforcement but also prevention to try to reduce the problem. He plans to have a drug-disposal day for the community in April, he said, noting that “prescription medication is one of the most abused (substances) in this society.” In response to questions, he said he has heard that the major drugs here are methamphetamines, heroin, marijuana and prescription medication. He hasn’t heard of much cocaine or crack use.

He said Los Alamos saw “significant reductions in both property and violent crime” in 2013. “We’re a safe community. That’s great,” he said. However, in a town where the crime rate is so low, he said, he has concerns that officers will lose their edge. He said he will try to mitigate complacency “through effective training.”

“Education, prevention, enforcement,” he said, repeating one of his major themes.

One of the interesting questions that his audience asked was whether he thought most of the residential burglaries in Los Alamos might be committed by people from “down the hill.” He said that in his experience, burglaries are “crimes of opportunity. “People tell me that they don’t lock their doors … I don’t recommend that … The community should not get complacent either,” he said.