Education 101: Who Pays for K-12 Public Education?
By Save Our Schools Los Alamos

In evaluating the implications of this forecast, it’s helpful to have a baseline understanding of how K-12 public education is funded in Los Alamos, in the state of New Mexico, and throughout the United States. For Los Alamos, the key sources for K-12 public funding are the State of New Mexico, the Federal government, and the School District’s income from leased excess property.

For the current 2013-14 school year, Los Alamos Public Schools have an operating budget of about $36M, derived from the following sources: 70 percent ($25M+) from the New Mexico Public Education Department; 22 percent ($8M) from a special federal law under which the Department of Energy contributes a flat $8M to LAPS annually; and 8 percent ($3M) in revenue generated by LAPS, mostly by leasing out surplus property.

In the United States, each state is responsible for determining how K-12 public education is funded.  Some states treat education primarily as a local tax responsibility, and some states – like New Mexico – treat this cost as a state funding issue.

Percentage distribution of revenues for K-12 public education in the United States by source:  Fiscal year 2011 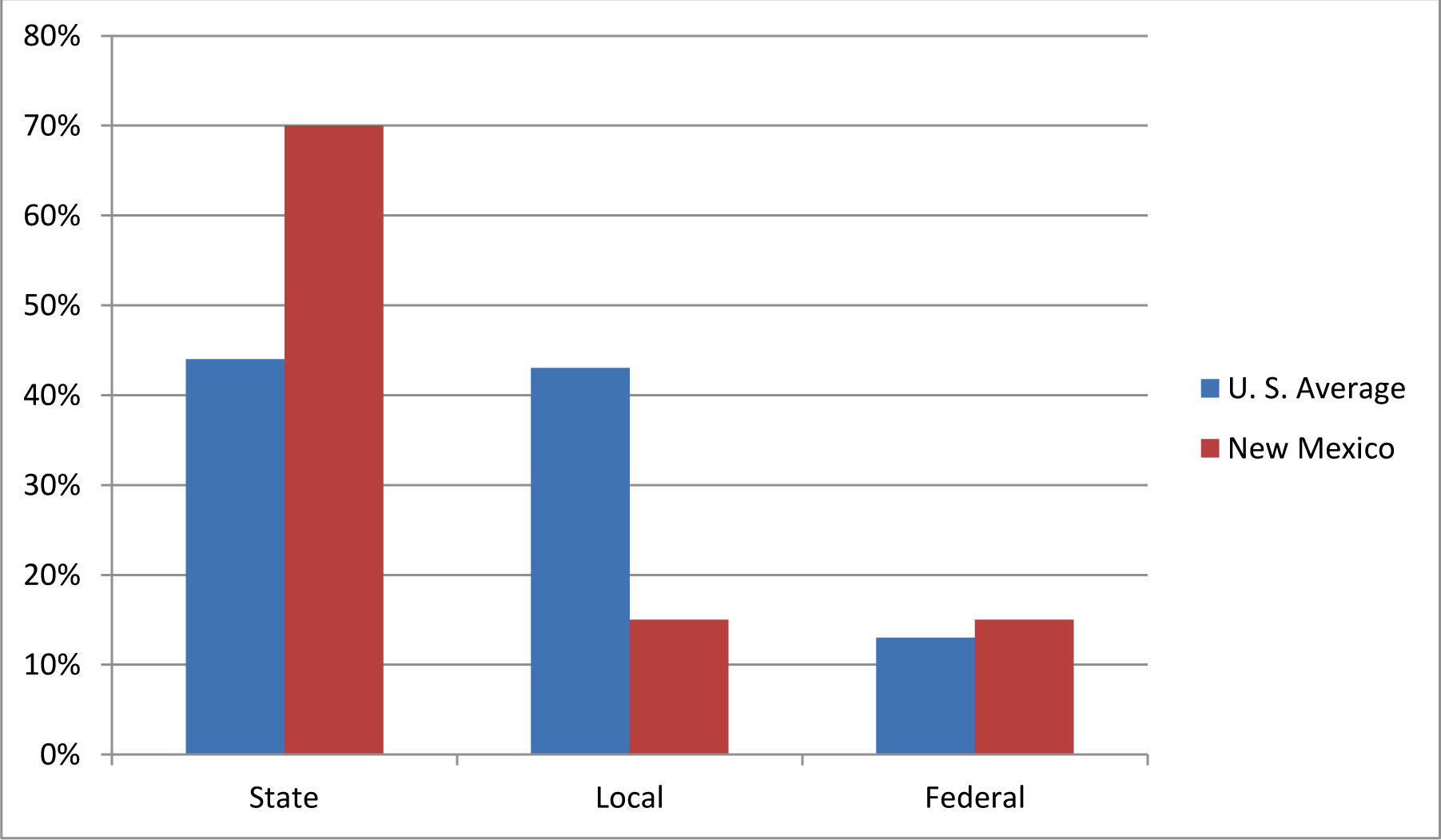 There is wide disparity across states in terms of how they use the mix of local or state funding for K-12 public education. 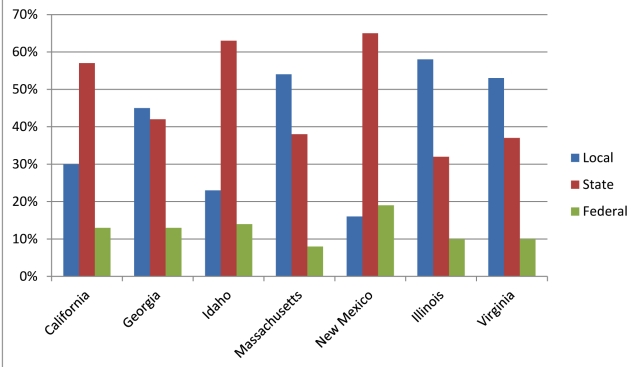 States that use local government funding for K-12 public education typically rely on property taxes as the funding source. The positive aspect of this approach is that local communities can decide on the level of K-12 education funding, and on school quality, as a matter of “Home Rule”; reflecting community standards, rather than statewide standards. The negative side of this approach is that a dependence on local funding can cause severe inequities in quality across the state, with higher-income school districts having better-funded schools than lower-income districts. Broadly, that outcome is problematic since it is generally agreed that more students from lower-income school districts typically need special services and support.

Forty years ago, the state of New Mexico found itself in that very situation – wealthier school districts had better funded schools than those in poor districts, worsening a performance gap and posing a strategic threat to the health and growth of the State. As a result, in 1974, New Mexico implemented legislation to create the State Equalization Guarantee.

The State Equalization Guarantee formula is the framework the state of New Mexico uses to determine how much each school district receives each year in state funding. Since 70 percent of K-12 funding comes from the state, this formula has significant impact on overall funding levels. It is a complicated formula that considers many variables including the wealth of the community, the number of special needs students, urban or rural locations, and the size of the individual schools within the district. Save Our Schools Los Alamos will write a dedicated article on the State Equalization Guarantee formula in the coming weeks to explain the system in more detail.

The goal of the State Equalization Guarantee is to ensure that all districts can provide a uniform and sufficient education as required by the New Mexico State Constitution. A key point is that to achieve “equalization,” these weighting factors result in different school districts receiving very different per-student payments. Because of the nature of the weighting factors, Los Alamos is on the low end of the per-student funding spectrum and is essentially a “donor district,” while other communities are “beneficiary districts”.

The New Mexico Public Education Department, under the Secretary of Education, administers the State Equalization Guarantee and is responsible for distributing state funding to school districts from the Public School Fund. In addition to funding for education, the Public School Fund provides money for in-district busing, for discretionary supplemental funding for emergencies, and for students who need to be educated outside of the state due to special needs.

The Public School Fund gets its funding from three principal sources: The General Fund, the Current School Fund, and Federal Mineral Leases. The New Mexico General Fund receives money from general and gross receipts taxes, income taxes, earned interest, rents and royalties, severance taxes, and licensing fees.  In 2012, 42 percent of the General Fund was allocated to public school funding. The Current School Fund contributes investment and lease income from its holdings. Federal Mineral Lease income arrives from the Federal government as a state share of earnings from mineral leases of federally owned land within New Mexico.

The overall system is good in that it helps the poorest of our communities have a school quality they might not otherwise be able to afford, but it is bad in that it holds communities that want and can afford excellent schools down to a lower common standard.

Facing pressure from declining enrollments, disadvantaged by the weighting factors in the State Equalization Guarantee formula, with heavy reliance on a flat federal subsidy that is not inflation indexed, and with a State administrative prohibition on local operating supplements for our schools; Save Our Schools Los Alamos is concerned that our community’s K-12 educational program is headed for a “perfect storm.”

Read more about New Mexico funding for K-12 public education at the links below or www.soslosalamos.com.

To see LAPS five year forecast, go to http://www.laschools.net/Page/5688 and click on the Full Agenda for the 10/24/2013 School Board Work Session.