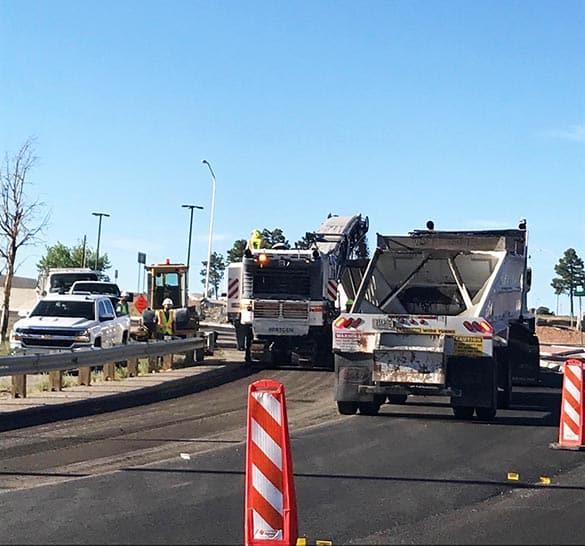 Commuters to and from Los Alamos are noticing delays along NM 4 and East Jemez Road since road improvement work recently commenced.

Work is expected to continue through October on several sections of highway from east of the Omega Bridge to the Totavi service station on NM 502 under a $7 million contract with Albuquerque Asphalt, Inc.

The road work is being funded under a settlement agreement reached between the Department of Energy and the New Mexico Environment Department following nuclear waste incidents in 2014 at the Waste Isolation Pilot Plant near Carlsbad. Under the agreement, instead of paying fines, DOE agreed to provide support estimated at $73 million for a variety of mutually beneficial and critical projects that will protect local communities and better safeguard transportation routes in New Mexico sites, which will improve the safety and security of nuclear materials and the designated roads on which they travel.

The contract for the work in Los Alamos County was awarded by the Army Corps of Engineers through an interagency agreement with DOE’s National Nuclear Security Administration.

Sections of road to undergo construction:

“The most important aspect of this project is that drivers get to work and back home safely,” said NNSA Los Alamos Field Office spokesperson Toni Chiri.

To do so, Chiri said drivers must practice patience, be flexible and follow driving instructions and traffic controls, which have been designed and implemented by project managers and engineers to minimize impact to traffic while keeping drivers and work crews safe.

“Work is primarily being performed between 6:30 a.m. and 4:30 p.m. Tuesdays through Thursdays with extended hours to 9 p.m. if feasible. Fridays through Sundays, work is between 6:30 a.m. and 9 p.m. Work is being performed during the day to provide for the safety of road crews and material delivery,” Chiri said, adding that occasionally an issue may arise that will make it necessary to extend the core work hours.

Drivers can expect to see temporary traffic lights along the route as well as pilot cars and flaggers, which are all implemented to control traffic and keep drivers safe.

Chiri said the Los Alamos Police Department has increased patrols on East Jemez Road and will continue onto NM 4 and NM 502 as work progresses. LAPD enforcement will include issues such as drivers not obeying the temporary stop light, drivers passing and making u-turns on double yellow lines, drivers not following the pilot car or driving through traffic control cones and using barricaded lanes.

Questions about this road work should be addressed to seproadwork@nnsa.doe.gov.