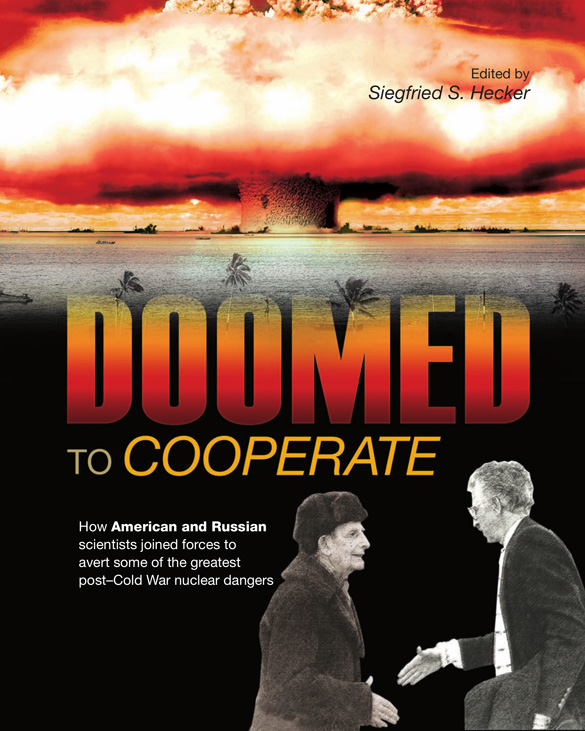 Doomed to Cooperate book cover. Courtesy photo
COMMUNITY News:
Doomed to Cooperate, a two-volume set of books sharing stories of lab-to-lab collaboration between the United States and Russia following the collapse of the Soviet Union, is now available as an e-book.
Published by Bathtub Row Press, the imprint of the Los Alamos Historical Society, the new digital format readers a way to engage with more than 100 Russian and American papers, vignettes, and interviews.

Doomed to Cooperate: How American and Russian Scientists Joined Forces to Avert Some of the Greatest Post–Cold War Nuclear Dangers tells the remarkable story of nuclear scientists from two former enemy nations, Russia and the United States, who reached across political, geographic, and cultural divides to confront the new nuclear threats that resulted from the collapse of the Soviet Union. In the book, many Russian nuclear scientists and leaders share their perspectives on this slice of nuclear history for the first time.

William J. Perry, Secretary of Defense from 1994 to 1997, praises the book, saying: “During the darkest days of the Cold War, the United States and the Soviet Union had thousands of nuclear weapons aimed at each other. The future of our civilization was hanging in the balance, and no one knew this better than the scientists who had developed these deadly weapons. Somehow, the scientists of both nations found a way to work together, and the world was made safer because of that. Sig Hecker has done a masterful job of pulling together those scientists to tell that amazing story. This book certainly makes a uniquely important contribution to nuclear history, but it also offers important lessons for the world today.”