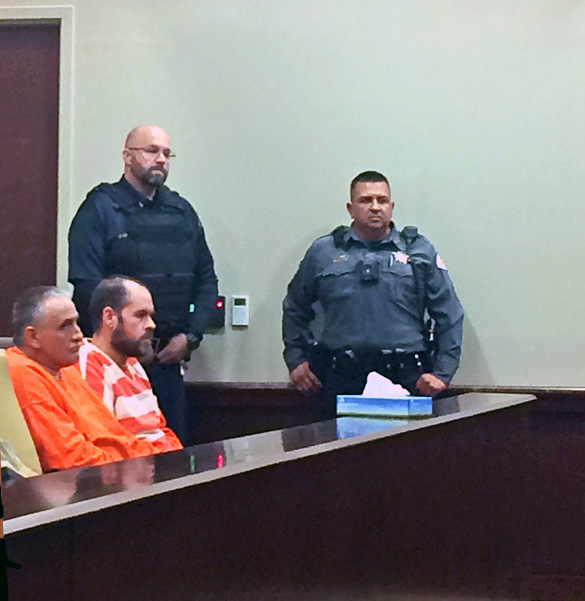 James Jeremiah Dyson, 42, was sentenced to three years in prison Aug. 7 in the First Judicial District Court in Santa Fe on charges of sexual exploitation of children and failure to register as a sex offender. Under the terms of a global repeat offender plea and disposition signed in April, Dyson agreed to plead no contest. He will receive credit for more than 500 days of incarceration already served and will have one year of parole.

Dyson was on federal probation for 2010 conviction on a charge of possession of matters containing visual depictions of minors engaged in sexually-explicit conduct when an Internet Crimes Against Children task force from the Attorney General’s Office traced child pornography to his computer IP address.

Assistant District Attorney Kent Wahlquist told Judge T. Glenn Ellington at the sentencing hearing that a later search of Dyson’s computer revealed child pornography and the computer was taken into custody but Dyson was not arrested at that time. Wahlquist said Dyson left his home almost immediately after that and failed to notify any sheriff of his change of address.

“So he’s a flight risk. He was on probation and he wasn’t doing this right. This happened towards the end of 2015. In February 2016, the law changed to where possession – sexual exploitation of a child for which the defendant was convicted now faces 10 years,” Wahlquist said. “At the time it was 18 months but it is important to note that the Legislature decided that this is a very serious crime and people convicted of such a crime should face more time. I think the Court can take that into consideration when deciding to impose these three years.”

Wahlquist noted a few points from the diagnostic evaluation of Dyson from the Department of Corrections. He said Dyson admitted he was participating in sex offender treatment for eight months.

“This shows that outpatient treatment is not working and that it wouldn’t work. Federal probation didn’t work so probably here it won’t work and he should be incarcerated,” he said.

Wahlquist said during his evaluation Dyson categorically denied having an attraction for or sexual fantasies, urges or desires toward minors.

“Essentially what this means is he will not admit he had a problem even though he was convicted of it, was on probation for it before, was doing treatment for it and still committed the same offense, he still says he doesn’t have a problem,” Wahlquist told the Court.

Wahlquist said that the evaluators’s impression was that Dyson had a nonchalant manner and that he categorically denied even committing the crimes he pleaded guilty to.

“It says he is accepting no responsibility for anything he has done and given this there is a concern, according to his evaluator that he will follow conditions of parole in the future,” he said. “It shows probation will not work. It has not worked. Children were put back at risk because he was granted probation and I urge the Court not to put them at risk again and to sentence him to three years of incarceration”.

Dyson’s attorney Craig Hay told the Court that it was a challenge for Dyson to go for a diagnostic evaluation after pleading no contest and that he needed a more private counseling situation so that he could be “more honest about where things stand in his life”.  He maintained that continuation of federal probation would keep Dyson on a very short leash.

Dyson told Judge Ellington he had turned himself in as soon as he heard there was an arrest warrant for him. He said he had done well on probation and attended a monthly treatment program in Santa Fe as well as being involved in a weekly group session.  He said he was expecting to receive a diagnoses of some kind of disorder after the treatment. Dyson cited his track record of six years on probation with a single violation that can speak for his compliance.

Judge Ellington told Dyson that was an interesting way to look at the situation and was very consistent with the evaluation and consistent with what he knew about Dyson which was limited to the record in front of him.

“Your comments take no responsibility for anything you have done. The fact that you seem to have no insight into your own situation and your involvement in it is very troubling. Your track record as you describe it cuts both ways,” he continued. “There was no violation for 4 and a half years, yet knowing the consequences, knowing the reality of the situation, nonetheless 4 and a half years later you are once again in possession of child pornography.”

Judge Ellington said that the fact that Dyson has an extended period of probation under the federal system gives him some solace that Dyson will be watched.

“You present a very real danger to the community, particularly to small children,” he said.