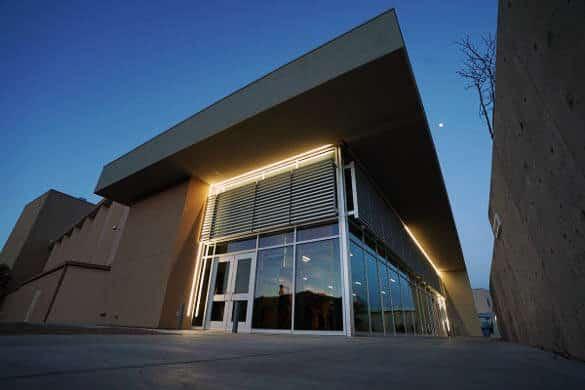 The renovation project at Duane Smith Auditorium is completed and the facility is reopened to the public and the schools. Photo by John McHale/ladailypost.com

By KIRSTEN LASKEY
Los Alamos Daily Post
kirsten@ladailypost.com
It took longer than expected but the finished product was worth the wait. Thursday, April 26, the community was invited to check out the reopened Duane Smith Auditorium.
The auditorium has been closed since June 2017 to do renovations on the lobby and restrooms.  For the first time in the Duane Smith’s 55 year history there will be enough bathrooms to accommodate audiences and the acoustics in the restrooms will no longer be so loud that the audience hears toilets flushing during performances.
Besides improved restrooms, a new pre-concert area was constructed, which will be used for chamber music performances as well as pre-concert lectures.
The project was a partnership between the Los Alamos Public Schools and Los Alamos County. Los Alamos County provided $1.2 million to the project and LAPS contributed $1.25 million. The goal was originally projected to be completed by December 2017; however, installing fire sprinklers and the permit process extended the project’s timeline.
LAPS Superintendent Kurt Steinhaus said it feels good to have the work completed. “We’re elated, excited, pleased to have Duane Smith officially reopened,” he said.
Steinhaus pointed out the celebration for the finished project was capped off with the ‘Topper Revue. He commended the Los Alamos High School students’ talented performances.
He added, “We need to add a big thank you to the County for partnering with us on it.”
Not only did the County contribute a significant amount of money toward the project but it also worked with the school district to make sure safety was addressed throughout the construction, Steinhaus said.
“We’re very excited to see the refurbishments of the building and expanded room and facilities,”County Council Chair David Izraelevitz said. “This is a community facility, not just for the schools but for all of Los Alamos.”
He added it shows the community’s dedication to improving its appearance and encourages others to help beautify Los Alamos.
“It also shows the council’s commitment to work with the schools and we will look for other opportunities to collaborate,” Izraelevitz said.
Another significant partner in the project, Steinhaus said, was the Los Alamos Concert Association. He said the organization contributed to the project’s design.
The association’s Artistic Director Ann McLaughlin said, “We are very grateful to the schools and the County for funding this project. It will improve the concert-going experience for our audience so dramatically.  No more interminable lines at the ladies room! No more shivering in the unheated lobby in the winter! And what a visual improvement! The Smith has always been a great community asset, but now it is one we can proudly show off to the rest of the region.”
Duane Smith Auditorium Manager Ryan Daly said he was also impressed with the project’s results. “It’s looks beautiful,” he said. “they did a really nice with the construction.”
Now that it is reopened, Daly said demand for the auditorium is high. He said there seems to be a show at Duane Smith every day till the school year is done.
He added the new pre-concert area will be put to use during the Los Alamos Concert Association’s performance on Sunday and the expanded ladies restroom is getting rave reviews.
Renovating the Duane Smith was part of LAPS’ long range capital improvement plan, Steinhaus said. The next major project for the school district is remodeling Barranca Elementary School.
The Duane Smith Auditorium has a long history in Los Alamos. Originally called the Civic Auditorium, it was built in 1950, according to a press release. Since it first opened, the auditorium has serviced not only Los Alamos schools, but the entire community, from Los Alamos National Laboratory to the Los Alamos Concert Association.
The former Civic Auditorium was renamed in 1994 to Duane Smith Auditorium after well-loved LAPS Superintendent Duane Smith. Smith, or “Smitty” as everyone referred to him, had a deep and lasting impact on LAPS, especially with special education.
His daughter, Kelly Myers, said she, her mother, Joanne Brown, and the rest of her family are thrilled with the completed project.
She added she is appreciated the County stepping in to help with the cost of the project so the school district would have to shoulder the entire price.
Myers, along with others, are working with ensure the school district will not ever have to be burden with paying for the maintenance at the auditorium. The Friends of the Duane Smith Auditorium are looking for an existing 501C(3) foundation to act as a fiscal sponsor.  The hope is once the group finds a foundation to work under, it can pursue donations and funds to be used for the auditorium’s upkeep.
Myers described the auditorium as the heart of the community, which is fitting because her father also played a huge role in the community.
She explained Smith came to Los Alamos as a teacher but ultimately became superintendent. He helped make the state be at the forefront of special education.
In addition to his work, Myers said there wasn’t a teacher who didn’t have a story about her father.
He knew everyone, she said, the teachers, the staff, the maintenance crews. He was also good friends with U.S. Senator Pete Domenici. “He was just one of those people who could relate to all kinds of people,” Myers said.
Smith wasn’t the only educator in the family. Myers worked for many years as a teacher and she said her sister was also a teacher.
“We are all very immersed in our schools and we’re just very proud of the schools and we always have been and we just want to share our appreciate to the schools and the County (for the renovations),” Myers said. 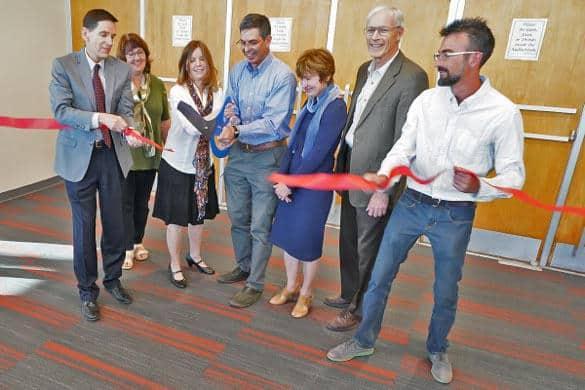 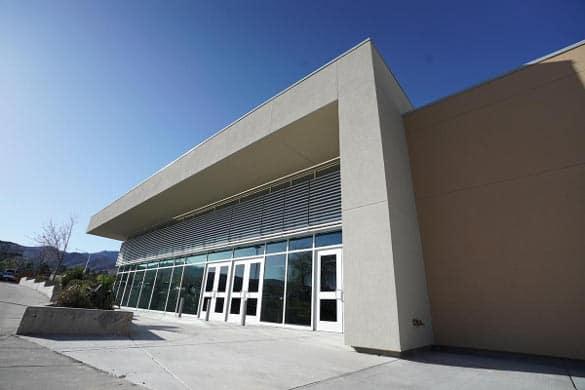 The exterior of Duane Smith Auditorium. Photo by John McHale/ladailypost.com 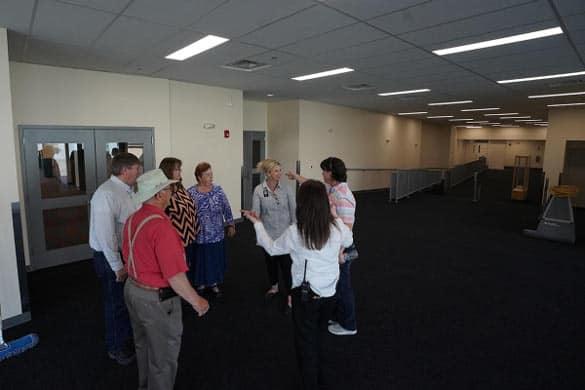 Scene from the celebration of Duane Smith Auditorium’s reopening. Photo by John McHale/ladailypost.com 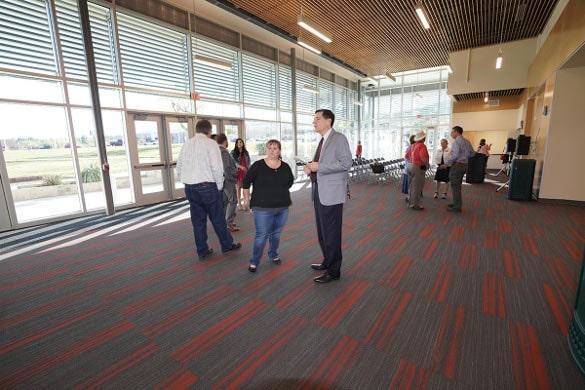 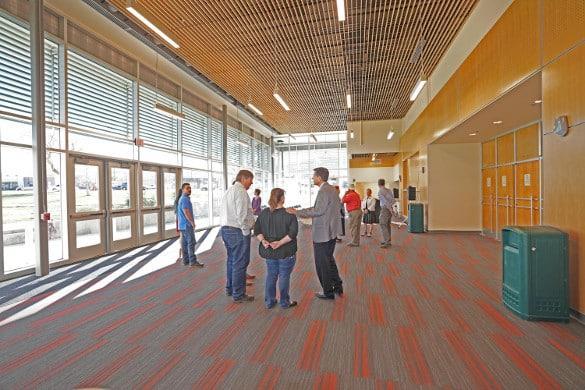 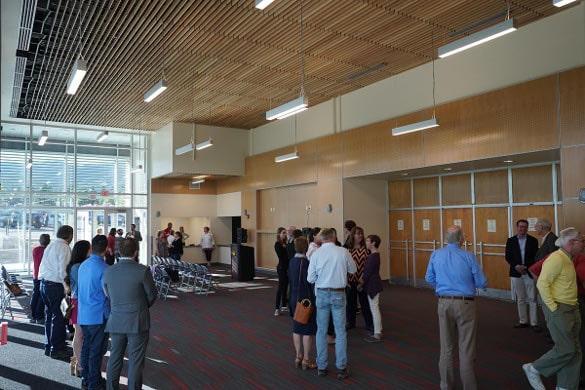 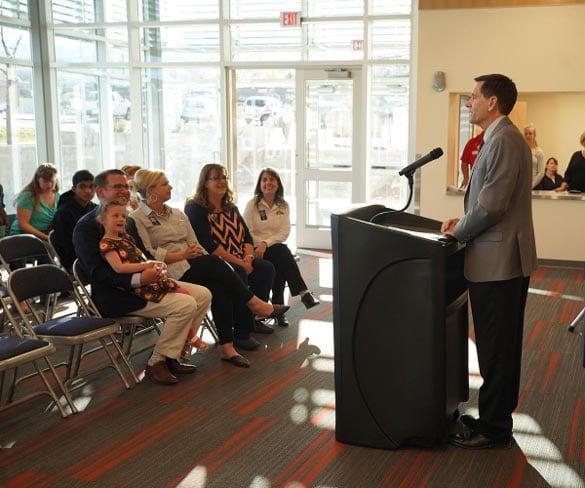 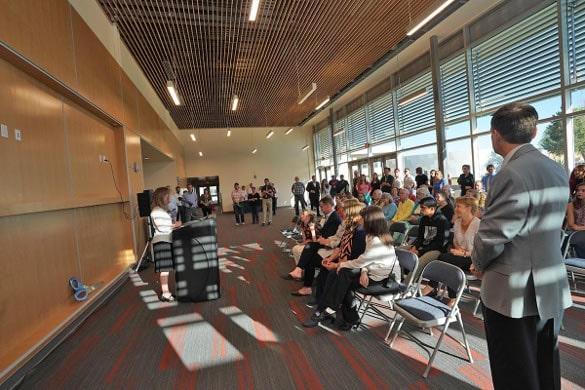 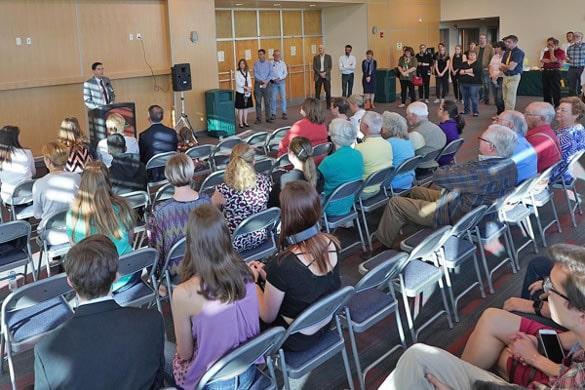 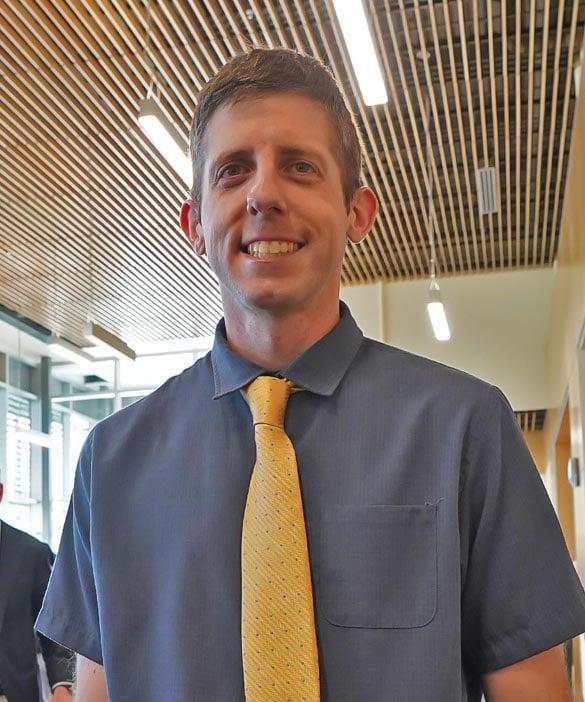 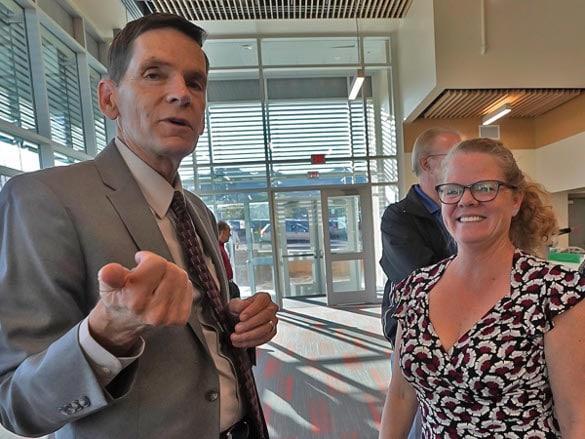 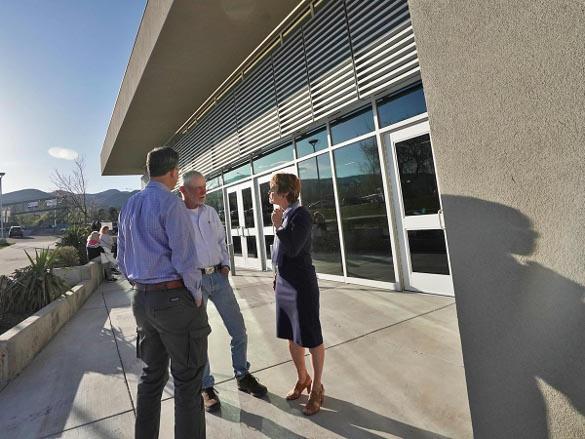 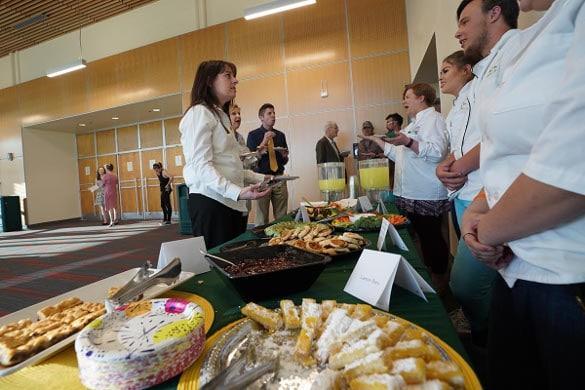 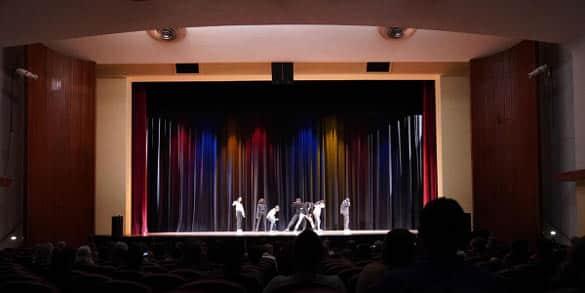 The Topper Revnue began after the celebration of the auditorium’s reopening. Photo by John McHale/ladailypost.com