Dr. John C. Hopkins to Lecture on ‘The Cold War and U.S. Nuclear Weapons: From My Perspective’ 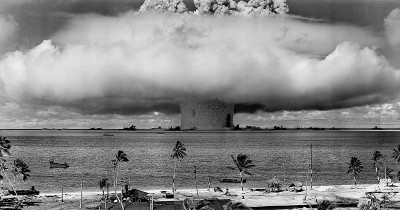 Mushroom-shaped cloud and water column from the underwater Baker nuclear explosion of July 25, 1946. Photo taken from a tower on Bikini Island, 3.5 miles away. Courtesy Photo

Dr. John C. Hopkins will speak at 7:30 p.m. Tuesday at Fuller Lodge on “The Cold War and U.S. Nuclear Weapons: From My Perspective” as part of the Los Alamos Historical Society’s 2011-2012 lecture series.

Immediately after World War II, the task at Los Alamos was to rebuild the staff following the mass exodus that took place with the surrender of Japan.

Hostility with the Soviet Union, that had origins going back to the Russian Revolution, was exacerbated by Soviet belligerence in Europe following the War.

Consequently the United States looked to nuclear weapons to counter the vast land army of the Soviet Union.

The world changed in August 1949 when the Soviet Union had their first nuclear test.

The 1950s witnessed enormous changes in nuclear weapons and the rationale for their use.

These were the golden years for Los Alamos when the lab enjoyed strong support in Washington.

Numerous technical advances were made from the development of very small weapons to the very largest hydrogen bombs.

The 1960s saw an evolution in nuclear weapons policy and, toward the end of the decade, the beginning of a long downward trend in the numbers of weapons in the stockpile.

The 1970s and ‘80s saw the development of the most sophisticated weapons with reduced weight, size and use of nuclear materials.

Finally the Cold War came to an end in the 1990s and Los Alamos started a new chapter in a long and distinguished history.”

Hopkins is a nuclear physicist with a 1960 Ph.D. from the University of Washington in Seattle and a Fellow of the American Physical Society with over 40 publications.

He was leader of the Center for National Security Studies at Los Alamos and a technical advisor to the Arms Control and Disarmament Agency in Washington and in Geneva.

Hopkins has worked closely with the State, Energy, and Defense Departments and has participated in numerous special programs for the U.S. Government.

This year, the Centennial Lecture Series celebrates 100 years of Los Alamos History and New Mexico Statehood. Lectures are the second Tuesday of the month at 7:30 p.m. in the Pajarito Room of Fuller Lodge. Lectures. The lectures are free and open to the public, because of the generosity of Los Alamos National Bank and the donations of members of the Historical Society.